Vinton has been reinventing itself over the past decade, using public-private partnerships to convert old, vacant buildings into bustling modern developments.

Now that the small eastern Roanoke County town has attracted new residents and visitors, the town’s new focus is on improving its transportation, walkability and infrastructure.

During that time, Vinton has converted two former schools into apartment complexes and transformed a public library into a Macado’s restaurant.

The historic but long-vacant Gish Mill is set to open in early 2023 as a mixed-use project with a restaurant, market and hotel rooms, and the former Vinton Motors building reopened in January 2021 as a pizza parlor, adding a coffee shop in November 2021.

In July 2021, The McDevitt Co. bought six downtown parcels from the town for a total of $10 in exchange for a commitment to invest $12 million in a hotel with between 90 and 100 rooms, improve the surrounding infrastructure and meet certain revenue goals. The hotel should be open by spring 2023 and will receive a 50% rebate on bed taxes for the next 10 years as part of the deal.

Several of the projects have followed that model — the county or town sells a property eligible for historic-tax credits to a developer who will invest the millions that it takes to bring it back to life.

“It’s kind of like one thing has led to another, and they are feeding off each other and generating jobs [and] tax revenue and repurposing underutilized space,” says Roanoke County Economic Development Authority Director Jill Loope.

Several projects, including new crosswalks and an updated stoplight system, are in the pipeline, aimed at getting people downtown without clogging up roads with traffic.

The town also is helping property owners restore storefronts to their original 1950s look. The town’s façade improvement program reimburses 50% of the cost of restoring commercial storefronts, up to $5,000.

Figuring out how to use new tax revenue generated by the redevelopment to improve life for the town’s new residents and visitors is a fun challenge, says Vinton’s town manager.

“The next phase is, ‘What do we do next?’” Peters says. “Now that we’ve invited the folks here … these redevelopment projects have created the revenue for us to reinvest in the infrastructure and the public amenities.” 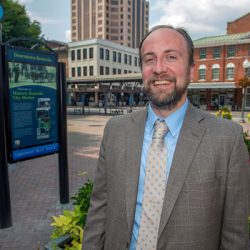