Cutting chains off the front door of the former Hampton Post Office, Mike Sinclair stepped inside the century-old building to find rotting wood, stacks of debris and a basement filled with standing water.

Sinclair, president and executive producer of m2 Pictures, had just purchased the historic, downtown structure at an auction for $300,000. Now he was faced with shelling out even more money to renovate the building into a studio for the television production company, which makes nonfiction cable TV programs. “We had no idea what we were getting into when we bought it,” he says. “We were distressed when we saw the shape the building was in, but we were committed to bringing it back. We wanted to see if we could get the grime off.”

That task relied not on cinematic magic, but on grit and determination. Nearly two years later, the building  has been completely renovated, the façade restored to its 1914 appearance, crumbling bricks replaced and the limestone exterior hand washed. Inside, there are offices, a studio and space to house props and costumes.

The rejuvenated former post office is just one of several facilities throughout Hampton that have been revitalized or are in the process of major renovations, including longtime city fixtures NASA Langley Research Center, Peninsula Town Center and Fort Monroe.

Reshaping the old into the new prevails in a city that traces its history to 1607 and is bordered on two sides by the Chesapeake Bay and the York River. “We don’t have much undeveloped land,” notes Leonard Sledge, Hampton’s economic development director. “We have to think strategically and critically about areas for redevelopment.”

Polishing old gems
Hampton may be hemmed in, but it still offers an assortment of locales, says Sinclair, who launched m2 Pictures in 2006. “Hampton is a great city for a company like ours,” he adds. “The real strength of the city is the diversity not only in its population, but in its landscape and architecture. We can make Buckroe Beach look like Santa Monica or the desert, and Queen’s Way in downtown can become Brooklyn.”

With m2 Pictures operating out of three buildings in downtown Hampton, Sinclair has a great deal invested in a city he has come to love. “I have a strong passion for the city of Hampton,” he says, noting that the refurbished post office, coupled with Old Point National Bank’s new early 20th-century-style headquarters, has helped reinvigorate the downtown. “We’re really proud of it. It’s helped spruce up Queen Street, and this block of the city has come back to life.”

Hampton’s Coliseum district also has been revitalized, thanks to the success of Peninsula Town Center. The mixed-use development, featuring retail, office space and high-end apartments, opened in 2010 replacing the aging Coliseum Mall. In October, the Dallas-based Tabani Group became the development’s third owner in three years, purchasing the property for $48.5 million. The retail investment company plans to build 100 additional residential units and develop vacant areas on the 1.1 million–square-foot property.

As Hampton’s largest economic development project, Peninsula Town Center is a tremendous asset to the city, Sledge notes. “In terms of replacing an aging, enclosed mall and creating a vibrant town-center atmosphere, Peninsula Town Center has been great. We want to continue to improve on a great product with the new owners.” Last year, the city announced that Faneuil Inc., a customer-service center for government and commercial organizations, is investing more than $2 million to set up operations in a 22,000-square-foot space at Town Center. Up to 400 customer service representatives will be employed at the center.

Hampton officials hope to replicate Peninsula Town Center’s success at Harbor Square, a former downtown apartment complex that had fallen into disrepair. The city purchased the 14-acre property and has begun construction of a courthouse, planning to follow it up with a mixed-used development of high-density, multifamily homes, restaurants and a grocery store. “It will be mostly residential with market-rate housing and a small commercial space,” Sledge says.

Reveille at Fort Monroe
The 400-year-old city has an abundance of older housing, including more than 170 units at Fort Monroe, the national historic site that was decommissioned as a military installation in 2011. Fort Monroe is boasting 100 percent occupancy of its available residential properties, adding credence to officials’ contention that the 565-acre stone fort has steadily come into its own as a housing, business and tourist destination.  “Our housing is leading the charge and shows there is interest in Fort Monroe,” says Glenn Oder, executive director of the Fort

Monroe Authority, which manages the site.  “Compared to what we have seen in BRAC [Base Realignment and Closure process] closings around the country, we are a shining star,” he adds “Fort Monroe is an almost perfect mixed-use community.”

However, businesses have been slower to take advantage of Fort Monroe’s 1.1 million square feet of commercial space. At issue, says Oder, are the major renovations needed on the nearly 200-year-old fort’s commercial buildings, many of which were built before the Americans with Disabilities Act necessitated elevators and other accommodations. “We have a wide spectrum of office buildings in various conditions and from various construction periods,” says Joe DosReis, the authority’s real estate director. “Most of the improvements are needed because of aged electrical systems and plumbing. As you get deeper in the buildings, it becomes a little more challenging.”

While the authority has been handling renovations, DosReis says it does not want to become a developer for the fort. “By improving buildings, we actually add value to them, but the more expensive renovations are better done by private entrepreneurs because they can get state historic tax credits.”

Several buildings are ready for tenants, and renovations are starting on the fort’s former post office, which will house the authority’s staff.  In addition, Liberty Source opened its headquarters in Fort Monroe in 2014, investing about $1.56 million to renovate two buildings. The company, which performs office functions for large corporations that had previously outsourced those practices overseas, plans to employ almost 600 workers in Hampton during the next few years.

There are also plans to use up to 19 buildings for a statewide residential science and engineering school called STEAM Academy. Lease negotiations are underway, DosReis says. “It’s still in process. Those plans are moving ahead.”

Set on an island in the Chesapeake Bay, Fort Monroe offers a unique business setting, DosReis notes. “People enjoy walking out the front door of their office onto the bay. Very few offices offer that kind of amenity.” On the financial side, Fort Monroe’s debt-free status enables it to offer competitive lease rates and tenant improvement packages. Average rents run about $1,250 per month for the more modern buildings.

“Our process was very clear from the beginning,” DosReis adds. “We intended to get people back to Fort Monroe. If we could get people to visit Fort Monroe, we could get them to live here, and if [they] live here, work here. We led with special events, fixed up houses, and now we’re working on commercial properties.” 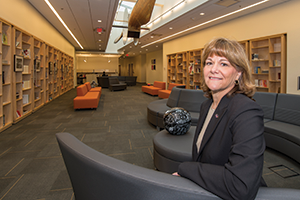 A century younger than Fort Monroe, NASA Langley Research Center is also sprucing up to its infrastructure for the 21st century.  NASA’s oldest field center has embarked on a 20-year revitalization program that includes replacing aging structures with new research and development facilities. Officials say the plan will save $100 million in maintenance and utilities over 20 years while bolstering Langley’s efforts to attract the nation’s top scientists and engineers.

“Langley is known as the Mother Center, and a lot of our buildings are 40 to 50 years old,” says Cathy Mangum, director of NASA Langley Research Center Operations Directorate. “We’re facing competition from Google and Amazon for the best and brightest engineers and scientists. Having modern infrastructure and workforce strategies such as flex time and teleworking can help Langley continue to attract the best and brightest.”

Langley’s first new building in 35 years, a $28 million, 79,000-square-foot headquarters, opened in 2011. The Integrated Engineering Services building was completed in the fall, and construction is expected to start late this summer on the $23 million Computational Research Facility, a consolidated data center for advanced computational research and development slated to open in fall 2016. Langley also plans to start construction on a 175,000-square-foot Measurement Systems Laboratory featuring a high-tech laser/lidar and electromagnetics lab in late 2016.

It’s an ambitious but pragmatic construction plan, Mangum says, especially since the new facilities are replacing older, less efficient structures. “We’re very mindful of the costs to manage infrastructure. For every square foot we build, we will tear down two square feet.”
Established by the National Advisory Committee for Aeronautics in 1917, Langley had a 2014 budget of $848 million. Its economic impact on Hampton Roads in 2014 came to $779.1 million, while it poured $870.2 million and $2.3 billion into state and federal coffers. The facility employs 1,900 civil service and 1,700 contract workers.

“It creates an area of the city in close proximity to NASA Langley, Langley Air Force Base and other federal facilities for an office and work environment,” Sledge says. “Our hope is all of those things will create a synergy conducive to new companies starting up, conducive to people thinking strategically about how to create an environment that leverages the intellectual capacity of all people traditionally working in the federal environment to create a commercial environment and services.”

Craig Davis Properties has made significant investments in the city during the past 15 years, including about $30 million on buildings in Hampton Roads Center north, the site of the future science park, says Steve Mallon, the company’s executive vice president for Virginia. The firm owns 10 acres in the park and has the option to purchase 11 additional acres from the Hampton Economic Development Authority. “It’s still in the planning stages,” Mallon adds, noting that the project’s development will rely upon the economy’s continued growth. Although research and development and technology companies would be the park’s major tenants, a retail component is also on the drawing board. “We’ll look at all aspects of commercial real estate,” Mallon says. “We’re building on the assets of the community.”

Those assets combine Hampton’s bountiful past, present and future. “We’ve had a lot of firsts in our city,” Sledge says. “Our objective is to continue to attract new capital into our city and create an environment conducive to existing and new businesses to grow and expand here.”