A newly renovated 14-story office building in National Landing is ready for Amazon.com Inc. employees to move in, developer JBG Smith announced Wednesday. The revamp of the 273,000-square-foot space at 1770 Crystal Drive, which is mostly leased by the e-tail giant, was finished two quarters early and under its $80 million proposed budget as outlined in a 2018 letter to shareholders.

JBG Smith declined to disclose the final cost of the renovation.

The building is an early part of the company’s HQ2 expansion in Arlington County, which was announced in November 2018. Amazon has leased 857,000 square feet in five buildings from Bethesda, Maryland-based JBG Smith. Meanwhile, the developer is managing construction of 2.1 million square feet of office space in two towers, as well as a one-acre park and 50,000 square feet of retail space.

“The return to productive use of 1770 Crystal Drive represents yet another significant milestone in National Landing’s ongoing transformation into a vibrant 18-hour neighborhood,” Matt Kelly, JBG Smith’s CEO, said in a statement. “We are thrilled to partner with Amazon and accommodate its growing presence in the region as we continue to make progress on its modern new headquarters.” 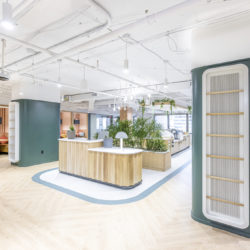