An Arlington native, Hazel also was an attorney who graduated from Harvard University and Harvard Law School. In the 1950s, Hazel began promoting commercial and residential growth in then-rural Fairfax County, specializing in real estate and property law. One of his early projects involved acquiring land for the future Capital Beltway.

In 1962, working with developer Gerald Halpin, Hazel got county supervisors to allow rezoning on more than 100 acres in Tysons. He also was instrumental in bringing in Tysons Corner Center and the Tysons II mixed-use development.

“Fairfax County and Northern Virginia lost a visionary,” says Victor Hoskins, president and CEO of the Fairfax County Economic Development Authority. “Til Hazel was as important as anyone in seeing Fairfax County’s potential to become one of the preeminent locations in the nation for corporate headquarters — and in reminding those who followed about continuing to invest in the assets that business needs in order to be successful here.”

Hazel also was a strong supporter of George Mason University. He was involved in purchasing land for its main campus in Fairfax and was on GMU’s Board of Visitors from 1972 to 1983, also serving as rector.

A longer version of this story is available here.

Hazel was force behind 1960s development of Tysons Corner 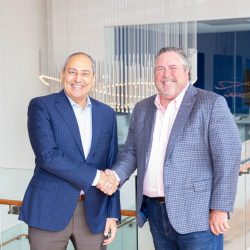