After decades of relying on the military, the Port of Virginia and tourism to drive its economy, Hampton Roads is taking steps to add to its financial arsenal, with business and civic leaders seeking a bit of divine inspiration — from angel investors.

Chalk up this new momentum to Reinvent Hampton Roads, a leadership initiative of the Hampton Roads Community Foundation formed to find strategies for expanding the economic base of a region with 1.7 million people dispersed throughout 15 cities and counties. Reinvent Hampton

Roads believes that building a diversified economy is the best way to increase the region’s competitiveness on the national and international stage. That push includes adding new businesses and industries to the economic mix, especially startup companies. “We need to create a culture that supports people who have an idea and want to translate that into a business and into jobs,” says Donna Morris, the foundation’s vice president for strategic initiatives, who staffs Reinvent Hampton Roads.

757 Angels Inc.
That’s where 757 Angels Inc. comes in. Launched in February, the angel investment group matches venture capitalists with local entrepreneurs seeking $100,000 to $1 million for their fledgling businesses. The investment organization grew out of recommendations from Reinvent Hampton Roads’ entrepreneurship study group, which determined that the region’s newest businesses need additional support to get off the ground. “There is a lack of ready capital in the area,” says Monique Adams, executive director of 757 Angels. “We’re excited that we’re providing a platform to match and connect entrepreneurs to capital.”

Two business owners, chosen from five semi-finalists, presented their companies to about 70 investors during the group’s meeting in March.

The angels concept is positioned to be a win for not only entrepreneurs and investors but for the entire region, says John M. Paris Jr., a member of 757 Angels’ board of directors and chairman of the Private Equity Group at Williams Mullen. “We’ll be able to fund companies in the area and keep our talent here in the area.”

As a bonus, 757 Angels could influence greater cooperation among Hampton Roads’ communities. “Regionalism is hard in Virginia because cities all have their own mission,” Paris adds. “The best way to help cities and the region is to have businesses lead in ways that are not city centered, and 757 is not city centered. It benefits the whole region.”

To be eligible for angel funding, entrepreneurs must be located in Hampton Roads but should derive a large portion of their revenue from outside the region. After undergoing a screening process, a select number of entrepreneurs pitch their businesses to more than 40 investors at one of the group’s three yearly meetings. “We embrace the entrepreneurial community and provide a forum in which they introduce themselves to investors who evaluate the pitch and decide as individuals if they want to invest,” Adams explains. “The investors still do their own due diligence, but we start the process for them. We make sure we’re pushing forth companies that are the most promising.” Along with providing capital, angel investors mentor entrepreneurs, introducing them to potential customers and other investors while helping their businesses gain credibility in the marketplace.

Comparisons to the TV reality show “Shark Tank” are inevitable, but Adams stresses that this is a collaborative effort that will ultimately benefit Hampton Roads. “We’re not interested in good TV,” she says. “We’re interested in what’s good for our neighbors. We want to make sure we’re creating jobs in Hampton Roads.”

These new jobs would not rely on the military, the ports or tourism. According to Reinvent Hampton Roads, those three components generated about 60 percent of the region’s $87.7 billion economy in 2013, with 46 percent directly related in the defense industry.  Those figures, combined with the region being ranked 302nd out of 382 metropolitan areas in employment growth since the recession, propelled Reinvent Hampton Roads to action. Companies seeking venture capital support in 757 Angels’ inaugural phase included medical, education and instrumentation firms.

“It’s been a phenomenal response,” Adams says. “All of the companies show great promise for growth and creating jobs in our area.”

Morris of the community foundation, who previously served as executive vice president and interim president of the now disbanded Hampton Roads Partnership, believes Reinvent Hampton Roads will succeed where other initiatives have fallen short. “This is something that has not been done before in the region, and we hope it leads to identifying implantable projects,” she says, noting that prior proposals involved many different entities with different and even conflicting objectives. “Everybody’s got to be committed to reaching a common goal. The implementation piece is very difficult when you’ve got a lot of players.”

Creating a mega-region
While 757 Angels is taking flight, recommendations from Reinvent Hampton Roads’ workforce development, industry clusters and civic leadership study groups still are being evaluated.  “Whenever you put people together in a setting where they discuss opportunities, it’s an exciting level that rises, and you come up with good ideas and want to move ahead,” Morris says. “We’re going to see what can be implemented in the short and long term.”

That includes cultivating burgeoning industries like advanced manufacturing, coastal energy and cybersecurity. “A lot of the things we’re looking at right now are based on the assets we’ve got in place,” she notes. And, despite the U.S. Navy’s recent announcement that the USS Gerald R. Ford will be homeported in Norfolk, Morris warns that Hampton Roads must be prepared for defense cuts. “We’re so comfortable. We’ve been very risk averse in the region,” she says. “We have to realize that it’s important to look at how we’re going to grow the region and grow jobs.” 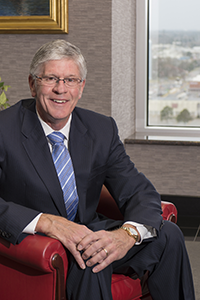 Thomas Frantz believes expanding  the region geographically is the ticket.  The chairman of Williams Mullen law firm is a leading proponent of merging the Hampton Roads Metropolitan Statistical Area, the nation’s 37th largest MSA, with Richmond, the 44th largest, to create a mega-region. Combined, the two would jump to 16th, which Frantz says would pique the interest of corporations looking to place plants or regional headquarters in one of the country’s largest metro areas. “The top 25 regions tend to get more advances and looks from companies,” he says. “We would be holding ourselves out to the world as one diverse, strong economic region.”

The mega-region would encompass 8,000 square miles and 3 million people, but all municipal jurisdictions and services would remain localized. “We would still consider ourselves citizens of where we live,” Frantz says. “From a day-to-day standpoint, there would not be much difference, but from a business and marketing standpoint, we would grow in importance.”

Mega-regions are emerging across the country, built around multiple adjacent metropolitan areas connected by overlapping commuting patterns, environmental landscapes and watersheds and linked economies and social networks. The Hampton Roads Business Roundtable and the Richmond Management Roundtable have discussed forming a mega-region for more than a year, encouraging collaboration between the two regions on issues like ports and transportation. “Clearly there are things that could help both regions,” Frantz says. “It’s almost like football. We’re each sort of a middle-size college team. Together, we could be like an Ohio State.”

Though still in the early stages, the idea has been well received, particularly among millennials, who focus on connectivity. “Every time we have spoken on [creating a mega-region], it’s been very enthusiastically accepted,” Frantz adds. “More and more people are talking about it. People are seeing what we can accomplish and that it’s more important to work together to bring new businesses and high-paying jobs.”

The Office of Management and Budget would ultimately decide whether the two regions unite.  It will take political will, Frantz notes, but he believes the result will be worth it. “You always come across obstacles along the path, but we feel good about this, that we’re going to do something this time, that it’s going to be important for this region,” he adds. “By adopting a bolder vision for our future, I think we can change some people out of being so parochial.”

Marketing group in transition
Change and perhaps reinvention is also on the agenda at the Hampton Roads Economic Development Alliance, which markets the region to companies throughout the world. Kevin Sweeney came on board as interim president and CEO in March after the resignation of Darryl Gosnell and is leading the HREDA through a transition period as it reviews its mission. “The bottom line goal is to be relevant in the community,” says Sweeney, who retired from the U.S. Navy as a rear admiral last year after leading Carrier Strike Group Ten. “We want to look at how else we can participate in the region’s drive to diversify and broaden its economic base.”

He adds that the HREDA will continue to leverage Hampton Roads’ strengths, including the port, a highly skilled workforce, its location along the mid-Atlantic coast, the climate, educational systems and quality of life, as it tries to attract advanced manufacturing, regional manufacturing, biohealth and other diverse industries. To do so requires regional collaboration. “We can only be competitive when we work together. It’s a team effort. A company may locate in one municipality, but the economy advances across the board to all cities here.”

As Hampton Roads strives for diversification, a growing number of its residents say life is getting better. That’s according to the 2014 Old Dominion University Quality of Life Survey. Seventy-one percent of the 853 respondents rated the region’s overall quality of life, including economic and recreational opportunities, schools and health care, as excellent or good. Chesapeake and Virginia Beach residents gave their cities the highest marks, followed by Suffolk, Hampton, Newport News, Norfolk and Portsmouth.

Those are the highest ratings since 2010, says Jesse T. Richman, director of ODU’s Social Science Research Center. “The last couple of years we’ve seen a bit of an uptick,” he adds. “Recreation — museums and beaches — were the largest positive that people mentioned. They also like the climate, economic opportunities and the quality of health care.”

Library opens; arena planned
For recreation, Hampton Roads boasts a variety of options, from oceanfront beaches to expansive parks throughout the region. Construction is scheduled to start this fall on a major recreation venue, an 18,000-seat arena across from the Virginia Beach Convention Center. United States Management will own the $200 million arena, which city officials call a regional game changer.

Another game changer is Norfolk’s Slover Memorial Library, which opened in January, eschewing the traditional library approach. The $65 million, high-tech facility covers three downtown buildings, including two renovated historic structures and a new six-story addition. One of the nation’s most innovative libraries, Slover combines a collection of more than 160,000 books with a digital media lab and a multitouch interactive experience covering thousands of local historical photos and artifacts.  “History really comes to life with the kind of technology that comes in this place,” says Sonal Rastogi, the city’s director of libraries. “It sets the standards for all libraries.”

That’s a success for a region trying to combine the old with the new. It is one that Hampton Roads’ economic development players believe they can emulate. “You always come across obstacles along the path, says Reinvent Hampton Roads’ Morris, “but we feel good about this, that we’re going to do something this time, that it’s going to be important for this region.”

Hampton Roads at a glance