Home News Rebirth on the bay

Rebirth on the bay

In a series of large gray tanks along an inlet off the Chesapeake Bay, groups of oysters no bigger than the tip of a pinky finger have begun to cling to empty oyster shells.

In these tanks, these weeks-old oysters attach to shells while acclimating to water from the Chesapeake Bay that is constantly pumped through the tank. Because oysters are natural filter feeders “the water’s actually going out cleaner than it’s coming in,” says Tim Rapine, managing director of operations at Cherrystone Aqua Farms in Cheriton on the southern end of Virginia’s Eastern Shore.

The tanks serve as a transition period for these selectively bred oysters. They have been raised in hatcheries in giant tanks on a diet of rich algae. They’ll spend a few weeks in the tanks before being placed on the bay’s bottom, where they will grow for one to two years before being harvested. 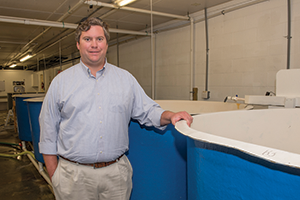 This process, called “remote setting” or “spat on shell,” is becoming an increasingly popular way to grow oysters that will be shucked (meaning they will be used in stews or fried rather than being served on the half shell.) Cherrystone, which started using this growing method four years ago, believes it will become a major boon for Virginia oyster growers. “We think this is going to be a game changer in Virginia,” says Chad Ballard, the president of Cherrystone, who represents the fifth generation in his family to grow shellfish. Cherrystone is the brand name of Ballard Fish & Oyster Co.

The refining of this process is just one of the latest trends in the rapid growth of shellfish aquaculture — the breeding and harvesting of fish in water.

Both generations-old oyster businesses and industry newcomers have seen success in growing oysters in a controlled environment, giving shellfish companies less guesswork in harvesting and greater ability to produce consistent quantity. The process also allows them to better protect shellfish from natural predators.

Virginia’s oyster industry has seen a resurgence during the past decade because of a combination of factors, including ongoing research, the management of public oyster beds, the addition of public hatcheries and the creation of a native sterile oyster.

These advancements, coupled with Virginia’s system for leasing water bottoms for growing shellfish, allowed the industry to take off at a time when the number of oysters from the Gulf of Mexico were dropping in the wake of Hurricane Katrina and the BP oil spill.

“Everything came together at the right time for us,” says Jim Wesson, head of the Virginia Marine Resources Commission’s (VMRC) Conservation and Replenishment Division. “At the same time that we had created a good method to grow oysters and added hatcheries, [the Gulf’s] supplies were being cut off…It was the perfect time for Virginia to get a foothold in the oyster markets.”

Already the largest clam producer by aquaculture in the country, Virginia also can claim its place as the largest oyster producer on the East Coast. The industry sold an estimated 40 million single oysters in 2014, an increase of 28 percent over 2013, according to the Virginia Shellfish Aquaculture Situation and Outlook Report from the Virginia Institute of Marine Science. 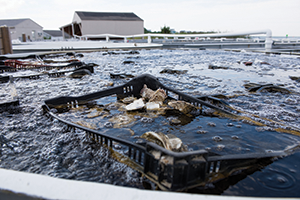 Faced with dim prospects for the future and decades of difficulties, Ballard’s grandfather prepared in 1983 to close a family oyster business begun in 1895.

His grandfather consulted with a well-known researcher at the time and ultimately decided to invest in the fledgling idea of farming shellfish. “He thought, “I can retire, or I can throw all my chips on one last ride,’” says Ballard.

Ballard Fish became one of the state’s pioneers in shellfish aquaculture. It took six years before Ballard’s clams were marketable, but today the company is the largest hard clam producer in the country.

The success Virginia had during the early 1990s in the controlled raising and harvesting of clams quickly replaced wild clam fisheries. It also laid the groundwork of research and infrastructure that later could be applied to oyster aquaculture. “Clam aquaculture was looked at and developed as an alternative to using the leased bottom,” says Karen Hudson, shellfish aquaculture specialist at the Virginia Institute of Marine Science.

Virginia’s leasing of its water bottoms dates back to the late 1800s, when the commonwealth established a system for leasing areas to grow oysters or clams. The state now has more than 120,000 acres under lease among 5,000 leaseholders, according to the VMRC.

Under law, leaseholders must use the water bottoms, and they can be passed down to future generations. The rent, which hasn’t been changed since the 1960s, is $1.50 per acre. “Our aquaculture is light years ahead of anyone else when it comes to oysters produced from aquaculture,” says John M.R. Bull, commissioner of the VMRC. “Maryland is now trying to do what we’ve been doing for the last century.”

While clam aquaculture flourished on the leased bottoms, efforts continued to try to find a way to revive the much-loved Virginia oyster. In the early 2000s, a project involving Virginia and Maryland agencies, as well as federal officials and more than 90 oyster scientists, examined introducing a non-native oyster species in the Chesapeake Bay.

Ultimately, scientists recommended against introducing the Asian oyster, but out of that effort came the creation of a native “triploid” oyster — an oyster that does not breed. The non-native triploid had been developed to help compare it with a triploid Asian species so that it could safely be tested.

The sterile oyster thrived in the Chesapeake Bay.

Oysters use a lot of energy when they reproduce during the summer months, making them scrawny and not harvestable. The introduction of a sterile oyster, which now represents more than 90 percent of raised oysters in Virginia, meant oysters could be harvested year-round. The move also allowed oysters to grow to a marketable size more quickly without going through reproductive cycles.

“It wasn’t deliberately developed for aquaculture, but people discovered that its usefulness was quite high,” says Stan Allen of the Virginia Institute of Marine Science. He heads the institute’s Aquaculture Genetics and Breeding Technology Center (ABC).

Allen, who first developed the triploid as a graduate student, says the disease-resistance research has truly allowed the oyster population to grow. “A lot of people conclude that the success for aquaculture is based a lot on the triploid, but the fact of the matter is that the triploid is the whipped cream on the sundae,” says Allen. “The main thing that enables stable aquaculture to thrive and grow is really the disease-resistance aspect of things.”

Refining the raising of shucked oysters
Most of Virginia’s oyster growing has centered on the cultivation of single oysters, or those that are served on the half shell. This labor-intensive process uses cages, racks and floats to store the oysters as they grow. Cage-culture oysters must be raised and shaken frequently so the oyster creates a nice deep cup.

Aquaculture has been too labor intensive to produce shucked oysters. But remote setting, where hatchery-raised oysters grow on shells before being planted on water bottoms, would allow aquaculture to be used for shucked products, because their shape doesn’t matter.

Ryan Croxton, co-owner of Rappahannock River Oysters in Topping, started an oyster business with his cousin in the early 2000s when their grandfather’s leases on the Rappahannock River were about to expire. The company has focused mostly on growing single oysters that the company sells in its three restaurants and distributes throughout the U.S. and even to Canada and Hong Kong.

But the company is now investing in some remote setting planting, which allows it to offer shucked oyster at a lower price point than oysters on the half shell. “If done right, it’s a great answer for what the industry needs,” says Croxton. “Cultured oysters are not completely affordable…I want everybody to be able to enjoy oysters.”

But the growth of oyster farming in Virginia faces some big hurdles. So far, hatchery production of oyster seed and eyed larvae needed for aquaculture has been unable to keep up with demand. (A handful of larger shellfish companies, like Cherrystone, are vertically integrated and have their own hatcheries.)

Croxton says he doesn’t know many people in the industry who have been able to get enough seed or eyed larvae they need. “We are able to meet our current needs,” says Croxton, “but we haven’t been able to grow as quickly as we’d like.”

Water quality is an issue for the entire industry but likely can impact hatcheries the most, when any problems in water quality easily affect the developing oysters.

Wild-caught oysters are back
While aquaculture has grown, the wild-caught oysters also have seen a resurgence. The Virginia Marine Resources Commission has helped public oyster beds through management practices such as rotational harvests and public shell plantings with fossil shells from outside Jamestown.

Wild oysters are harvested both in private leases and public fisheries. “Oysters are the most complicated fishery that we manage, because it’s not just one fishery,” says Bull, who adds that the VRMC manages 87 species. “What works in the Rappahannock River doesn’t necessarily work on the seaside of the Eastern Shore.”

Oyster harvests were less than 20,000 bushels in the 1990s. In 2014, the harvest topped 500,000 bushels. “We buy all that we can from the independent oyster men,” says Tommy Kellum, vice president of Kellum Seafood, which distributes oysters to 34 states. “I embrace our aquaculture efforts in Virginia, and there are a lot of smart people in the industry, but it’s important to me to recognize the contributions historically as well as today of the traditional fishery that has contributed to the economy of Virginia.”

The good news for the Chesapeake Bay is that the addition of more oysters — whether wild-caught or grown — is good for the environment. “With shellfish, you’re making money, but the shellfish is cleaning the water at the same time,” says Wesson with the Virginia Marine Resources Commission. “It’s actually removing nitrogen from the water.”

Today there is growing interest in oyster production up and down the East Coast, including Virginia. The commission received more than 500 applications for leases on the water bottoms in the last two years.

“What we have in Virginia is pretty unique,” says Bull. “I don’t know of anybody else that has this amount of water under lease, significant participation in aquaculture and a wild-caught fishery that has been doing very well in recent years. Combined with clam aquaculture, I don’t know anybody else that’s doing the business of shellfish like Virginia.”