Home News Ready for a comeback?

Ready for a comeback?

Training programs prepare students for a new age in manufacturing

In 2006, a joint subcommittee of the Virginia legislature studying the needs of the manufacturing sector and the future of manufacturing in the commonwealth found disturbing statistics.

The numbers haven’t improved since then.

In June, the Virginia Employment Commission reported Virginia’s manufacturing employment at 229,100, a more than 20 percent dip in a decade.

Despite those statistics, the outlook for manufacturing in Virginia seems to be improving.

You have to look no further than a recent announcement by China’s Shandong Tranlin Paper Co. Ltd., which says it will invest $2 billion in an advanced manufacturing operation in Chesterfield County. It is expected to employ 2,000 workers by the end of the decade.

In July, the Brookings Institution reported that the Hampton Roads area, rich in technologically oriented defense contractors such as Huntington Ingalls Industries, led the nation in its share of job openings — 18 percent — for science, technology, engineering and math (STEM) jobs that did not require a bachelor’s degree.

For Tranlin and defense contractors in Hampton Roads, developing a skilled manufacturing workforce is key.

Everyone from the governor to the Virginia Manufacturers Association says that workforce training is one of the surest ways to help revive manufacturing in the commonwealth. (see related story)

One example of how the pipeline of able workers can be achieved is at the Advanced Technology Center in Hampton Roads.

The center is the product of a partnership involving the Virginia Beach City Public Schools, Tidewater Community College (TCC) and the city of Virginia Beach to train students in technical fields.

Michael Summers, provost of TCC's Virginia Beach campus, says the experiment began when the school district and the college began talking in 2001-02.

“We were trying to put together the critical pieces in an economic development puzzle,” Summers says.

“The school kids would be across the hall from the college kids, and they could see a continuum of training that would put them in good-paying jobs,” Summers says. “It sounded like a good deal.”

Public school students with the aptitude and interest also were eligible to participate in a dual-enrollment program in which they could earn college credits while they were in high school.

Summers says one problem was that some of the brightest high schoolers were from families of limited means. They didn’t take the college courses because of the expense.

“We didn’t have permission to discount the tuition,” Summers says.

Within the last year or two, college officials received that permission. For dual-enrollment students, tuition was slashed by two-thirds. It’s now $45 a credit hour, compared with more than $150.

“They want more kids in the pipeline,” he says. “We’re just at the tip of the iceberg.”

Newport News Shipbuilding is Virginia’s largest industrial employer with a workforce of more than 21,000. In 2013, the company hired 900 workers, and it is expected to add 1,100 workers this year, including engineers, electricians, machinists and mechanics.

The shipbuilder recently opened a new vocational educational building for its Apprentice School in Newport News to help supply the shipyard’s demand for skilled workers.

What’s happening in Hampton Roads is only part of the story of how public and private groups are working to build a workforce for the skilled manufacturing jobs of the future.

The Virginia Manufacturers Association has the ball and is running with it.

DeRosear and Betty Adams, executive director of the Southern Virginia Higher Education Center in South Boston, use the association’s Manufacturing Skills Institute (MSI) to provide what they say is one-stop access to world-class workforce training programs.

The focus of the MSI is to give residents in Southern Virginia opportunities to earn industry-recognized technical skills credentials, including the Manufacturing Technician Level 1 certification (MT1).

MT1 certification tells potential employers that the worker has an understanding of modern manufacturing and has attained mastery of certain core competency areas, DeRosear says.

The core competency areas are math and measurement; spatial reasoning and manufacturing technology; and business acumen and quality.

When workers achieve MT1 certification, they can — depending on their abilities — continue at other institutions or pursue additional training programs and certifications.

Thousands of manufacturing jobs will be opening during the next several years as a result of retirements alone, according to the VMA, and even more highly skilled workers will be needed in advanced manufacturing operations.

DeRosear hopes the program that the manufacturers’ association has established in collaboration with the Southern Virginia Higher Education Center (SVHEC), will evolve into a national training model. 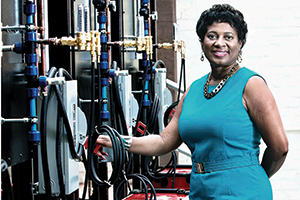 Nettie L. Simon-Owens, director of workforce services at the SVHEC, says the center also is working with existing employers in the area to upgrade the skills and knowledge of current workers to meet changing workplace requirements.

She pointed to the more than 10,000 hours of training that the center has coordinated for 440 employees at the local Presto Products Co., a supplier of products ranging from private label food and disposer bags to specialty stretching films.

Recently, SVHEC was designated as a regional Center of Excellence for advanced manufacturing workforce training.

Producing individuals who earn industry recognized certifications is the goal.

The American Welding Society, the National Institute for Metalworking Skills and Siemens are among those providing the certifications and credentialing.

The newly minted trainees are being targeted for, though not limited to, aerospace, automotive and heavy machine manufacturers. 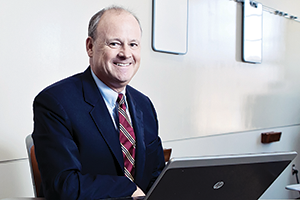 A second regional center of excellence is at the New College Institute in Martinsville, a city that in recent years has consistently had one of the state’s highest unemployment rates.

Former state Sen. William Wampler Jr., New College’s executive director, says the center — along with the advanced manufacturing training equipment and instructors it has in place — already has helped attract a new manufacturer to the region, Kilgour Industries Ltd.

Kilgour is a United Kingdom-based company that, among other things, supplies aircraft airframe and engine machined products for the aerospace industry.

The company is investing $27.3 million to establish its first U.S. operation and plans to hire more than 150 skilled workers.

Wampler says one of the factors persuading Kilgour to choose the Martinsville area was the display of equipment to be used to train local students, a machining device for producing precision parts.

“’That’s exactly what we use in Blackpool [England],’” Wampler quoted Kilgour officials as saying.

“Through targeted efforts, we were able to attract our first European prospect,” Wampler says.

He emphasizes that the pipeline providing highly skilled employees goes through the region’s two community colleges, Patrick Henry and Danville.

“What we’re trying to do,” Wampler says, “is create a culture where you can not just go to work, but make a career out of it and raise a family.”

In 2012, Wampler toured Rolls-Royce’s manufacturing, educational and research facilities in the English cities of Derby and Sheffield to help target the training programs at the New College Institute.

Rolls-Royce, a global power systems company, is an organizing member of CCAM and has a highly developed apprenticeship program in the United Kingdom.

Its Virginia plant is on the 1,000-acre Crosspointe Centre campus in Prince George. John Tyler Community College in Chester currently is providing customized training to Rolls-Royce employees in Virginia.

He says community college counselors also do a lot of myth-busting about what’s involved in 21st-century manufacturing, as they talk with high school students and others.

“The perception is that you need a university degree to be successful. But today it’s less about where you study and more about what you study,” Herndon says.

“My father worked in manufacturing over the course of a lifetime, and it’s changed tremendously. Most folks still have the idea that manufacturing is a dirty, hot, low-skill environment. It’s not.”

An understanding of that new level of sophistication in manufacturing might be gleaned from a recently announced donation by Siemens Corp. of $2 billion in computer software to seven Virginia universities and community colleges.

Siemens, a Germany-based firm and a global power in engineering and electronics, made the donation to help train students for high-tech manufacturing careers.

“The engagement of business is absolutely essential,” Herndon emphasizes.

He adds that if manufacturing is going to make a comeback in Virginia, it begins with training workers with the right skills.