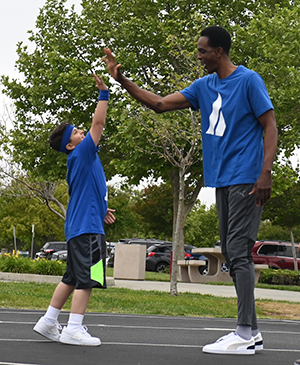 A commercial for Atlantic Union Bank featuring University of Virginia basketball legend Ralph Sampson launched this week, showing the 7-foot-4 Harrisonburg native back on the basketball court — sort of.

The spot, which will air statewide on broadcast and cable channels, is titled “Loyalty,” begins with a boy supporting his brother, who has a bit to learn about shooting hoops. The 59-year-old Sampson then shows up on the outdoor basketball court, praising the boys for their loyalty to each other. Richmond-based West Cary Group, Atlantic Union Bank’s advertising agency, created the TV spot, which was shot earlier this year in Los Angeles.

In a phone interview Thursday, Sampson said that the idea for the commercial came up after he had done appearances for the past couple of years for the Richmond-headquartered bank and had built relationships with its executives. “It became something special,” he said.

As for what else he's been up to lately, Sampson says his 2019 has been “surreal,” beginning with his former team’s NCAA basketball championship win in April and followed by the May demolition of University Hall, which was nicknamed “Ralph’s House” during his record-setting early 1980s tenure at U.Va.

“I watched some of the process, when they gutted the inside out,” he said, and then he helped push the button at the implosion of the arena, a “very surreal and emotional” moment for him.

After winning three Naismith Awards as the National Player of the Year, Sampson graduated from U.Va. in 1983 and played for the Houston Rockets through 1987. He won the NBA Rookie of the Year award in the 1983-84 season, but knee and back problems started to plague him after the ’87-88 season. Over the years, Sampson played for the Rockets, the Golden State Warriors, the Sacramento Kings and the Washington Bullets in the NBA, and he served stints as coach for James Madison University, the Richmond Rhythm and the Phoenix Suns.

Earlier this year, Sampson returned home to Virginia from Los Angeles and he splits his time between Harrisonburg and Newport News. His mom and dad are in their 80s and are healthy, Sampson says, and he has various business interests, including with Atlantic Union. He also is a brand ambassador for Puma, which in March re-released his signature basketball shoes from the 1980s, then called the Majesty and now named after him. One pair in the sneaker line, the “Virginia Lo” model, is bedecked in U.Va. blue and orange and sports the Virginia state seal on its heels.

“It’s been a wild ride for me,” Sampson says, with the shoe attracting young, obsessive sneakerheads and the attention of GQ magazine, which named it the “sneaker of the week” in October.

He stays in touch with “pretty much all” of his former U.Va. teammates — Ricky Stokes, Othell Wilson, Jeff Jones, Jeff Lamp and others — and he relished being at every single NCAA tournament game the Cavaliers played last spring.

His advice to the players from the 2018-19 squad who have gone on to play in the NBA: “You have to go back where you were made. You’ve got to come back and build that relationship with the university. The loyalty program is what I’m about.”