Can a firm that focuses on building analytics, building owners and today’s more creative funding methods become an industry leader? Steve and Chris Sadler think so.

The brothers founded Richmond-based Allegiancy in 2005. They didn’t want a commercial real estate asset management firm that tried to be good at everything. They wanted to be good at only one thing: managing an asset so effectively that they can ensure owner/investors maximum returns.

It’s what CEO Steve Sadler refers to as “radical specialization. I think of it like medicine,” he says. “In 1950, if you had a problem with your hand, you would have gone to a general surgeon at your hospital, and they would have done the best they could to solve your problem. Today, that’s not the case. You go to an orthopedic surgeon, and they only do hands or only do wrists. The specialization we see coming in real estate is very much like what has happened in medicine.”

The niche approach seems to be working. Today Allegiancy has a staff of 19 with $1 billion worth of assets under management. The company made the top half of Inc. Magazine’s list of 5,000 fastest-growing private companies in America this year, coming in 2,486 on growth of 151 percent and annual revenue of $3.7 million.

In July, it relocated its headquarters to a larger 7,000-square-foot office space in the Boulders Office Park in Chesterfield County. The move occurred shortly after Allegiancy acquired TriStone Realty Management in Houston. The deal added $450 million in assets under management in nine states, with most of Allegiancy’s holdings in low-rise office buildings in secondary markets along the Eastern seaboard.

The Sadlers credit the company’s rapid growth in part to a technology-driven platform.  Allegiancy has invested nearly $2 million in proprietary technology that creates an analytical profile on every building. “We have a real-time data feed,” explains Steve. “We know every time an invoice comes in, when it gets paid … We know when a bid for work receives authorization and when it gets completed. We get information on how much power is being consumed every 15 minutes.” 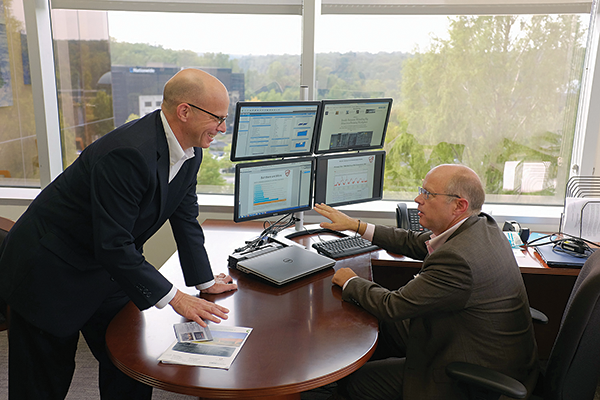 All the information goes into a single, cloud-based database used by Allegiancy’s asset and property managers to make timely decisions. The hard-data approach, says President Chris Sadler, saves money on maintenance. Well-maintained buildings attract tenants who provide the income stream that increases a building’s value. Allegiancy also benefits since the company gets a monthly fee based on the percentage of a building’s revenue and growth of the asset.

Chris says Allegiancy’s automated system is so good that it flagged higher-than-normal utility costs at an office building in North Carolina shortly after the firm took over management from a national company. After benchmarking the expenses against other buildings of its size, Allegiancy investigated and learned why the costs were higher. “The utility bills had been paid late every month,” says Chris. Under the previous asset manager’s system, invoices went to Nashville for processing and then to New York for a signature and then back to North Carolina before the bill was paid.

Allegiancy markets the company as being an advocate for the building’s owner so that type of waste doesn’t occur. “The equity owners usually get short shrift in the overall management of the asset,” says Chris. “The lender always gets paid. The leasing broker always gets paid. The guy paying all the bills and who has the greatest risk is the equity owner.” In many instances, he adds, buildings are owned by people or partnerships from afar “and there’s no one really looking out for that building like it’s their business.”

One California investor, Mark Schoning, says he was so pleased with Allegiancy’s management that he later went on to become a shareholder in the company. “The vast bulk of my investments are with them,” he says. “I’ve been pleased with their returns and handling of investments.” Asked about a typical return on his investments, Schoning says returns have ranged from 7 percent to as much as 50 percent.

According to Steve, cash flows on most buildings are north of 8 percent. “That’s just cash flows, that’s not including capital gains,” he says.

In September, Allegiancy filed a $50 million capital fundraising offering with the U.S. Securities and Exchange Commission under new regulations that the Sadlers say will open the doors to more real estate investment.

Under what’s known as the new Reg A+ rules — that grew out of a provision of the 2012 Jumpstart Our Business Startups (JOBS) Act — companies can raise up to $50 million in equity from investors, including smaller, non-accredited investors. Before the new rule went into effect in June, the limit was $5 million.

Steve has championed Reg A+ in speeches around the country. He refers to it as a “democratization of capital,” because it gives smaller businesses access to capital through an abbreviated and less expensive process, and it widens the circle of potential investors.
Allegiancy’s filing is under review by the SEC. Steve says San Francisco-based W.R. Hambrecht & Co.  has agreed to serve as the lead investment banker. If the offering passes SEC review, the firm plans to shop the deal to investors and close it out by December.

The Sadlers’ goal is to raise at least $30 million, money they would use to continue acquiring other real estate asset management companies and building Allegiancy’s technology platform.

Not everyone is a fan of the new Reg A+ offerings. While state regulators aren’t against increased investor participation, the North American Securities Administrators Association lobbied against the SEC ruling that pre-empted states from reviewing capital fundraisings of $20 million or more. They do have oversight on deals of $20 million or less.  Regulators in Montana and Massachusetts have filed suit in federal court to block or delay the new rules.

“I think it’s a bad thing,” says Ron Thomas, director of the Division of Securities and Retail Franchising for Virginia. “Most of these offerings tend to be local in nature and who knows the issuers and business climate better than the local state securities administrator?”

Plus, there are still costs, though they are less onerous than ones associated with more traditional fundraising methods. If Allegiancy raises $30 million, Steve says, the company expects to spend about 7 percent, or $2 million. The bulk of that, $1.5 million, would go for broker commissions with the rest needed for direct costs such as printing and legal and filing fees.

Still, Reg A+ gives companies another option.  “It’s another arrow in the quiver. Companies can still do family and friends, a private placement, a full-fledged IPO, or a Reg A,” says Steve.

In Allegiancy’s case, the Sadlers are counting on a new round of capital to help them hit a five-year goal of managing $10 billion to $15 billion worth of assets.  “I think the future is bright,” says Steve.