Before last year’s pandemic shutdowns, 24-year-old Julia Swanson had been commuting from Newport News to her job as a civil engineer for the Virginia Beach office of Kimley-Horn, a national engineering firm headquartered in North Carolina.

It could take 35 minutes to an hour and a half traveling only one way, and Swanson says she often pulled up Google Maps to see what she could expect.

Sometimes she took the Hampton Roads Bridge-Tunnel, while other days she chose the Monitor-Merrimac Memorial Bridge-Tunnel.

The region’s average commute time in 2019 was just over 24 minutes one way, according to the U.S. Census Bureau, and it has remained fairly steady over the past decade.

While that doesn’t sound so bad, the Census also estimated that 12.4% of people living in the Virginia Beach-Norfolk-Newport News metro area have a regular round-trip commute of 45 minutes or longer. Nearly 2% of that group is on the road for 90 minutes or longer on workdays.

For four glorious months in 2020, Swanson’s commute was not an issue. Her gas costs dwindled to nothing, she walked everywhere, and she could still get all her work done. “It was really nice. I was able to work out, I was able to do stuff for my life, I was planning a wedding,” she says.

But in July 2020, Kimley-Horn asked workers to return to the office. Because she was new, Swanson decided to go back full time, instead of taking advantage of a flex option to work occasionally from home.

It was brutal for his first eight years on the job, driving “into the teeth of rush hour,” O’Hallarn says, until 2017 when he was able to set his own teaching schedule. He learned that a 10-minute difference in departure time could determine what he would face on the road. “I felt like traffic was in control and that was just a byproduct of where I chose to live and where I chose to work.”

Like Swanson, the pandemic shutdown was an oasis of sorts for O’Hallarn. “The difference between a commute of 9 feet from my bedroom to our office and 42 miles is significant and something I’ve been thinking about,” he says.

Many people like Swanson and O’Hallarn are now pondering what it would be like with a more flexible work schedule — this time for good.

While O’Hallarn loves being on a college campus, he is less patient about traffic than he used to be and uses Zoom for meetings on days he doesn’t teach.

Although employers are deciding whether to require in-person work vs. a remote or hybrid approach, workers hope that more options will lessen their commuting headaches.

That could wind up affecting Hampton Roads’ traffic planning as well.

Road work, of course, is a near constant in the region.

Over the next 24 years, the Hampton Roads region expects to receive $30.7 billion from federal, state, regional and local sources to invest in the region’s transportation system. Of that, $17 billion is to maintain the existing system and $13.7 billion is to improve it. The majority of the funds for new and additional capacity construction, such as new interstate lanes, comes from the regional Hampton Roads Transportation Fund, which is funded with proceeds from regional surcharges on sales and use taxes and fuel taxes.

Among the region’s major road projects is the largest transportation infrastructure project in state history — the $3.8 billion expansion of the HRBT, which was started last October. Additionally, the Virginia Department of Transportation is widening Interstate 64 on the Peninsula and the southside, adding a two-lane tunnel to the Chesapeake Bay Bridge-Tunnel and making improvements to the I-64/I-264 interchange.

Projects such as these are guided by the Hampton Roads Long-Range Transportation Plan, the 20-year blueprint updated every five years to reflect changing conditions, such as population and employment growth, anticipated travel demand, new technology and environmental changes. The 2045 plan was just adopted this summer.

One change, says Dale Stith, a principal transportation planner for the Hampton Roads Transportation Planning Organization, was a shift toward incorporating plans for different scenarios, including sea-level rise and autonomous vehicles. But significant numbers of people working from home was not part of the group’s considerations, Stith notes.

If the Hampton Roads region sees a big change in the number of people working from home over a longer period, Stith says, traffic planners will take that into account in the future.

“So many different drivers can change how we get around and how we travel,” she notes. “This pandemic has highlighted another potential that changes travel behavior — working from home and not going to an office space.” 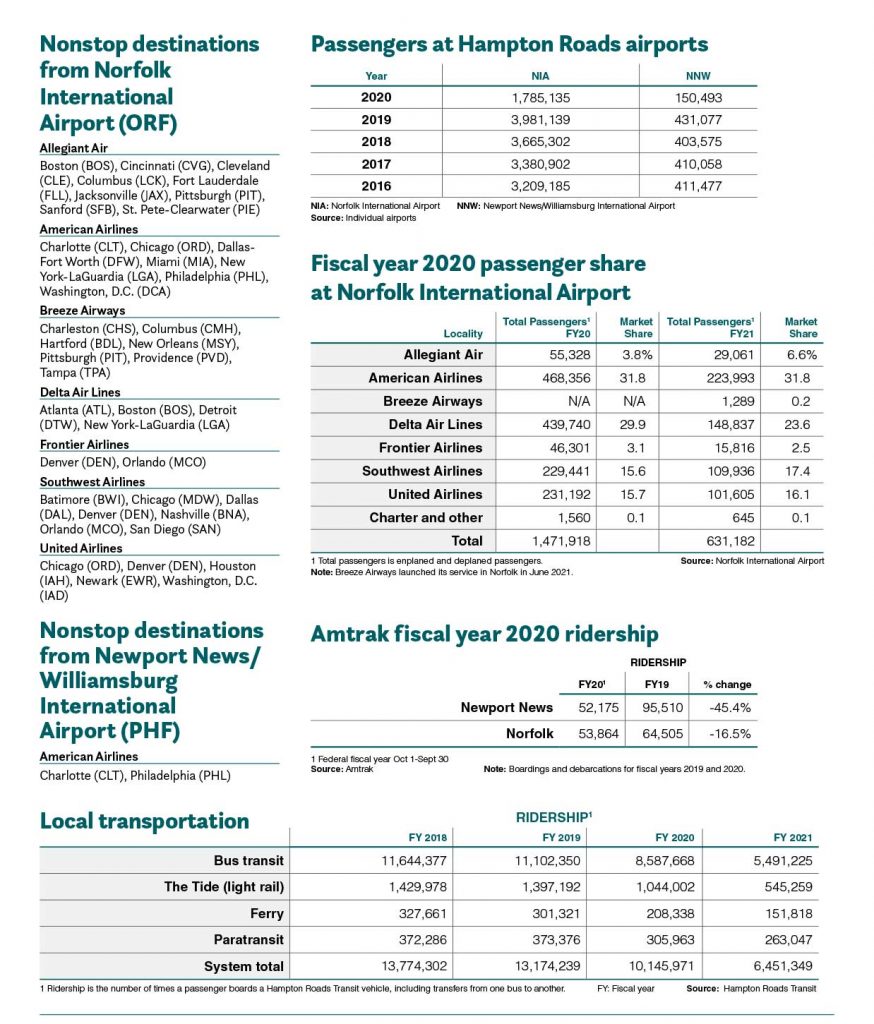