From barnstorming with the governor to promote Amazon’s HQ2 to bringing added context to President Trump’s trade war with China, these are people who are adding to the commonwealth’s conversation and giving us a face to associate with huge and ambitious endeavors. 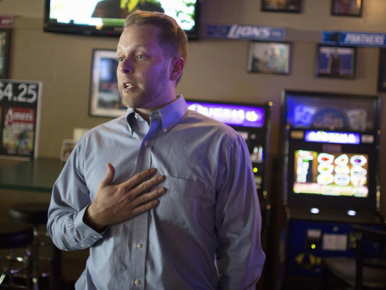 As a Virginia Alcoholic Beverage Control Authority special agent, Kevin Anderson was on the lookout for illegal gambling, underage drinking and other vices. Today, he has switched to the business side of gaming — navigating the legal gray area that has resulted in the installation of 6,000 Queen of Virginia “games of skill” machines in 2,500 businesses across the state and watching out that no one confuses them with still-illegal-here slot machines. Anderson’s side business as a consultant, equally interesting for a former ABC agent, is helping distilleries, breweries, cannabis and hemp businesses meet licensing requirements in about 20 states. •

The trade war between the United States and China intensified last year, and Virginia’s Michael Cooper brings unique insight to the situation. He speaks Mandarin and has been doing business for 40 years in China, where his employer, TMEIC Corp., continues to operate factories. Cooper is the marketing director for the Roanoke-based, Japanese-owned company, which manufactures automation control systems. He spoke with Virginia Business earlier this year about the challenges that the U.S.-China trade war poses to companies such as TMEIC. “My anticipation is that there are going to be some wounds that have been opened in this fight that are not going to close,” Cooper said. “And the long-term or even medium-term ramifications for U.S. companies is not good.” •

Jeff Kelley’s name has been in the papers lately for not exactly the right reasons, but the Richmond public relations pro still has a great sense of humor. After working as a reporter for the Richmond Times-Dispatch, Kelley started his communications firm in 2015. He’s now best known as the spokesman for Richmond’s massive, proposed $1.4 billion Navy Hill downtown redevelopment project. Local media revealed in September that he ghostwrote VCU President Michael Rao’s January op-ed column in the Times-Dispatch praising the project. Kelley said he drafted the column based on views Rao expressed in an interview. Kelley’s other clients include VCU Health and Virginia Community Capital, and his Instagram account — @jephkelley — is worth checking out for its stunning architectural and river photos. •

Dominion Energy is in the news for many reasons, but increasingly the utility giant is making headlines with its alternative energy projects and Mark Mitchell is the executive overseeing these ambitious plans. Top on his list is the offshore wind project near Virginia Beach, which is currently in the pilot stage but has been proposed to expand into the nation’s largest wind development project. It could eventually feature 220 wind turbines — each 600 feet tall — producing a collective 2,600 megawatts of energy — enough to power 650,000 homes. In late 2020, Mitchell says, Dominion expects to finish its ocean-floor survey and present its findings to the U.S. Bureau of Ocean Energy Management. Mitchell began working at a large startup company at a nuclear plant after finishing college, and since then, he’s been fascinated by big projects. “That’s how I got the bug.” Other major priorities on his horizon, he says, include expanding Dominion’s solar portfolio and shepherding its $3 billion coal-ash cleanup project. •

Ardine Williams is the face of Amazon HQ2 in Virginia. Shes been touring the state on listening tours with Gov. Ralph Northam and is in charge of recruitment for the company’s upcoming $2.5 billion East Coast headquarters in Arlington’s Crystal City area. Thousands of hopeful job applicants turned up to hear her give advice (“Read [Amazon’s] leadership principles”) during a career day event in September. Williams started recruiting workers for Amazon Cloud Services in 2014, bringing expertise in logistics, data and technical know-how from her stint as a captain in the U.S. Army Signal Corps. Williams’ recruiting prowess will be on full display over the next decade as she’ll be adding 25,000 employees to the e-tail goliath’s company roster. •