A good transit system can do more than move people around, says David Green, CEO of the Richmond-based GRTC Transit System. It can also attract people that companies want to hire.

Richmond is next up in Virginia to find out how far a transit network can go in spurring economic growth. Under GRTC’s leadership, the city is close to breaking ground on a $54 million, 7.6-mile bus rapid-transit line (BRT) that will run from Henrico County in the west, down the city’s Broad Street corridor to Rocketts Landing, a mixed-use development on the James River east of downtown.

The plan is to begin construction next spring on the project, called the GRTC Pulse, and start operation in October 2017. The Pulse will have dedicated lanes and 14 stations, along with synchronized traffic signaling. During peak demand, buses will run every 10 minutes. Green and others want to extend the system eventually nine miles west out to the rapidly growing Short Pump area in western Henrico.

The project has been approved in principle by Richmond City Council and is backed by Mayor Dwight Jones, but it is not a done deal yet. A group representing 11 neighborhoods called the RVA Coalition for Smart Transit is seeking to delay the plan for a year. City council must approve an operating agreement governing The Pulse in coming weeks for construction to begin.

“This is what businesses are going to be looking for,” Green predicts. There’s a generation influence going on, with millennials in particular attracted to mixed-use, transit-oriented places, he says. Employers are noticing. “If you don’t have these things, if we can’t provide it here in Richmond, we’re going to lose all this talent,” he says.

The Marriott move
Arne Sorenson, the CEO of Marriott International Inc., cited those kinds of pressures back in February when he announced the hotel company is looking for a new headquarters location. About 2,000 employees work at its current headquarters in Bethesda, Md. “I think, as with many other things, our younger folks are more inclined to be Metro-accessible and more urban,” he told The Washington Post. Those comments have set off competition for the headquarters among Washington-region localities. 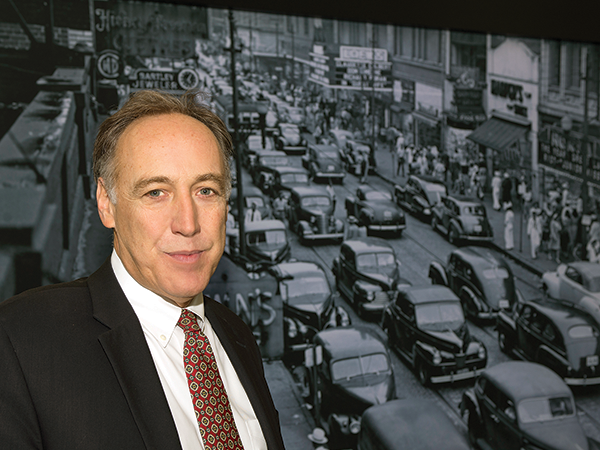 Sorenson was acknowledging a trend well underway in many urban markets as suburban office parks empty out in favor of major transit corridors. But his comments “sent shock waves around the country” because it showed even giant companies were feeling competitive pressures to get and keep the best workers, says John Martin, CEO of Southeastern Institute of Research, a Richmond-based firm with a background in community planning and transportation. “We’ve reached a tipping point in moving to a multimodal society.”

Martin says millennials, in particular, prefer the work, play, live environment that transit systems can support. “Technology has hyper-wired them together,” he says. Community is important, and they “are much more interested in being in activity centers. We’ve found they really can’t have an experience unless they’re sharing it.”

So the quality of the community makes a difference. “We’re seeing sort of emerging millennial hotspots, where some cities are getting a decided advantage,” Martin says. “Companies are saying, ‘Gosh I want to be in those places.’ It’s incumbent upon Virginia’s economic development community … you’ve got to invest in place.”

Developments in technology and in the function of transit systems are part of this change, Martin says. Fare cards are common instead of cash, for example, and there are apps that can tell riders when the next bus or train will arrive. Some transit systems have free WiFi. Traffic lights can be synchronized to let buses move through intersections with fewer delays. Plus, teleworking is more common, as is the rise of a “freelance economy” in which workers are less tied to one employer. “So people are really going to pick a place” based on the quality of life and not necessarily on how close it is to their job, he says.

Martin was to be part of a Dec. 1 event being held in Henrico, called “Transit Means Business,” which had support from transit interests and groups like the Greater Richmond Chamber of Commerce. A similar event was held in Northern Virginia in May. The Henrico event also was to include a panel moderated by Selena Cuffee-Glenn, Richmond’s chief administrative officer. Scheduled panel members included Ted Ukrop, who opened the Quirk Hotel on Broad Street in September, and an executive from Stone Brewing Co., which is opening a new location near the James. Among others who spoke at the event was Aubrey Layne, the state’s secretary of transportation, and Laura Lafayette, CEO of the Richmond Association of Realtors.

Good timing
Richmond got lucky when it came to funding the BRT project. About $25 million of its funding came from the U.S. Department of Transportation’s TIGER program (which stands for transportation investment generating economic recovery). The state’s Department of Rail and Public Transportation is providing about $17 million; Richmond is contributing $7.6 million; and Henrico will pay $400,000.

Green says “the planets lined up” for the project because a long study on how to do a BRT system in Richmond had just been  completed when the TIGER grant option came along. “We were ecstatic when they announced the opening for applications,” he says. Gov. Terry McAuliffe threw his support behind the project as well. 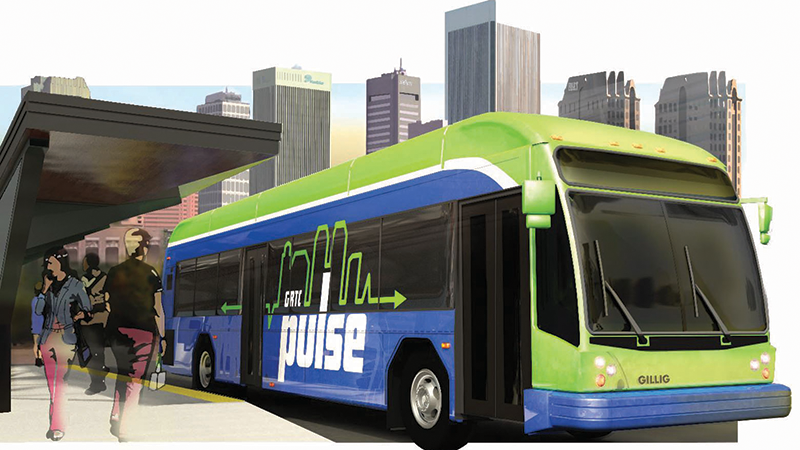 The Broad Street corridor was chosen for the Pulse system because it has the “highest existing and projected population and employment densities and the most transit supportive land use in the Richmond region,” according to RVA Rapid Transit, an organization that would like one day to see four BRT lines reaching into surrounding counties and intersecting in downtown Richmond. Within a half-mile of the planned BRT line, there are 33,000 people and 77,000 jobs with the potential for more, the group says.

In Virginia, new rapid transit systems have favored rail, which is far more expensive than BRT. The biggest is the D.C. region’s Metrorail system, which last year opened new stations in Tysons Corner and is continuing extension of the new Silver Line to Washington Dulles International Airport. In Norfolk, a light rail project, The 0, opened in August 2011 on a $318 million 7.4-mile corridor. It may be extended to Virginia Beach.

While transit has the power to drive economic growth, it’s still possible for smaller communities who can’t support that kind of investment to create places that will attract people and employers, says Stewart Schwartz, executive director of the Washington, D.C.-based Coalition for Smarter Growth. Thriving downtowns can have the same kind of success. “It may not be the big employers who come, but it’s still happening with smaller companies, and it doesn’t necessarily require transit,” he says.

But, for bigger regions, “if they’re going to remain competitive, using good transit and transit-oriented development is the key,” Schwartz says.

The Pulse is a major step for the Richmond region and a new test of the appeal transit systems can have, if done well. “Richmond’s never seen anything like this before,” Green says. “We need to make sure we do it right.” As far as expanding into the counties and creating a true regional BRT network, Green thinks the project will sell itself. “Once they experience it, the counties are going to want to expand.”