Data centers are key to Prince William’s economic development strategy. The county designated about 9,500 acres in 2016 as an overlay district to target areas with the necessary infrastructure to support data centers, and supervisors are considering an expansion.

Data centers generate significant tax revenue and provide a variety of jobs, says Christina Winn, the county’s executive director of economic development. Tax revenue from data centers in the county increased to $79.8 million in 2022 from
$5.9 million in 2013.

“It really comes down to that commercial tax base,” Winn says. “That benefits our schools, libraries and parks.”

After a 10-hour public hearing in September, the county Planning Commission recommended developing a 2,100-acre data center corridor on Pageland Lane, adjacent to the Manassas National Battlefield Park. Known as the Prince William Digital Gateway, it could add as much as 27 million square feet of data centers. While some landowners want data centers, other residents oppose development near their homes and Manassas National Battlefield Park, the historic site of two Civil War battles.

In Bristow, the proposed 270-acre Devlin Technology Park, which would have added up to 4.25 million square feet of data centers, was put on hold by developers in September after residents expressed concerns about potential noise from industrial cooling systems.

“If it’s in an industrial area, go for it, but don’t put them 100 feet from houses,” says Steve Pleickhardt, president of the adjacent Amberleigh Station neighborhood association, which opposes the construction. 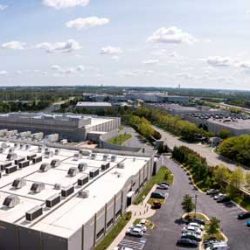 Centers made up 62% of state economic development announcements

The ‘stress test’ for data centers

During COVID-19 crisis, broadband consumption has risen 50% during daytime hours.