Corey Stewart calls Prince William County a “snapshot of the future of America.”

The chairman of the county’s Board of Supervisors has watched it grow and diversify. “This community once was the red-headed stepchild of Northern Virginia, and now it has really prospered,” he says.

Prince William now is the second-largest county (trailing only Fairfax) in Virginia. It is home to about 425,900 residents and has a median household income of $97,000. “Our percentage of residents with higher degrees [38 percent] is more than double other parts of the country,” Stewart says.

Ethnic and racial minorities represent 51 percent of Prince William’s population, making it a “minority-majority” county. “As the county has become more diverse, we have become more prosperous,” Stewart says. “We’ve been moving up even as other counties in Northern Virginia have flattened out.”

The county’s attributes — accessibility; a lower cost of living in comparison with other Washington, D.C., suburbs; good schools and a high quality of life — are as much a draw to businesses prospects as they are to new residents. The county has more than 70 parks, a minor-league baseball team, a performing-arts center and top-rated golf courses. This summer the Robert Trent Jones Golf Club in Gainesville will host the Tiger Woods Foundation’s 2015 Quicken Loans National Golf Tournament.

The county’s economy continues to flourish. Prince William followed 2013’s $1 billion in new capital investment with more than $500 million in investment last year. “We are moving from a more traditional place as a residential community to an employment center much like Fairfax did in the 1960s and 1970s,” says Jeffrey Kaczmarek, executive director of the county’s department of economic development.

The value proposition
Business and residential development stretches across the county. The western areas historically have been perceived as more rural and agricultural, but growth has brought in a mix of industrial, retail and residential projects.

Prince William Parkway has had a huge impact on the county. “One of the biggest things the board has implemented in the past 20 years is very aggressive road construction,” Stewart says. “Better roads help build business as well as taxpayer satisfaction.”

One current road construction involves a 12-mile stretch of Route 1 in the North Woodbridge and Triangle areas. Part of the Potomac Communities Initiative, expansion of the road to six lanes, is expected to spur new development. “Prince William is soon to become perhaps the only locality on the East Coast of the U.S. that has redeveloped an entire stretch of Route 1,” Stewart says.

The board chairman says the county’s consistency and business-friendly approach over the years also have been factors in its economic growth. “We never had a board that rubber stamped every development or declined every development. The business community knows what to expect for the most part,” Stewart says. “We are about 30 percent lower than other tax bills in Northern Virginia, including Loudoun and Fairfax.”

Kaczmarek says the county’s accessibility, tax rates and available land make it a value proposition for business prospects. Only about one-third of the county is developed. “We want to make sure we have land available to attract businesses but also protect our parks and rural crescent,” he says.

Prince William has been able to attract businesses in those groups because of its dense fiber network, abundant and redundant electrical power and a tax system that is advantageous to data centers. “We have 22 data center projects, and we have crossed the 2-million-square-feet threshold for data centers,” Kaczmarek says.

One of the newest industry clusters is advanced manufacturing. Prince William is working with a number of companies involved in 3-D printing, aviation and composite materials. “We are just in the early stages of seeing where we might be advantageous to them,” Kaczmarek says.

Technology also is one of the county’s strongholds, thanks to entities such as the Marine Corps Warfighting Laboratory and several federal and state research institutions. Innovation Park, a 1,500-acre location for life sciences and forensic research facilities, houses firms such as American Type Culture Collection, a global bioscience resource center. It is also home to the Virginia Serious Game Institute and Prince William Science Accelerator. 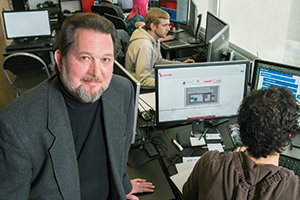 The Virginia Serious Game Institute (VSGI) is the only entity of its kind in the U.S. In addition to conducting research, the institute creates simulation and game solutions for the federal government as well as the private sector. It currently hosts seven startups, three of which were founded by George Mason University graduates. “We will have 14 total startups by the end of 2015,” says Scott Martin, the institute’s founding director, who also is director of the Computer Game Design Program at GMU. “We also hope to attract companies from outside of Virginia to locate near the VSGI.”

The neighboring Prince William Science Accelerator focuses on attracting early-stage, life-sciences companies. It bills itself as the only public/private commercially available wet lab space in Northern Virginia. “We have leased the ground floor of the building and built out nine wet labs for use by life-sciences companies,” Kaczmarek says. The facility currently is home to one firm, and the county is in final stages of negotiation with two other businesses.

College campuses
GMU’s Prince William Campus is housed on 134 acres in Innovation Park. The Board of Supervisors began working with the school to establish a Prince William campus 20 years ago. “That has led to a lot of growth in the bioscience industry right around the campus,” Stewart says. “That marriage between economic development and George Mason University is really beginning to bear significant fruit at this point. It’s not unlike the Research Triangle area in North Carolina, with industry that blossoms around major universities.”

March marked the opening of a new life-sciences building on campus. The 75,000-square-foot lab building is dedicated to research. It will host companies involved in bioengineering, biochemistry, personalized medicine, and nanotechnology and cancer research. It also will house the Center for Applied Proteomics and Molecular Medicine. “One of the building’s special attributes is a state-of-the-art nanotechnology clean room,” says Emanuel Petricoin, the center’s co-director. “It’s a great attractor for company collaborations and other in-state universities in the area. We are really excited by that.”

The GMU campus is also home to a university spinoff, Ceres Nanosciences, which soon will offer a high sensitivity urine test for Lyme disease. “It is commercialized nanotechnology that we developed in our lab. We licensed the technology, and we created the product,” Petricoin says.

Ceres also is working with a program funded by the Bill and Melinda Gates Foundation to use its particle technology to develop a new method of detecting the Ebola virus. The company will collaborate with GMU and the U.S. Army Medical Research Institute of Infectious Diseases to assess whether the technology can help create a virus detection method using saliva instead of blood.

The county’s higher-education system also includes Northern Virginia Community College, which continues to strengthen its workforce development programs. Since 2013, the college has invested more than $460 million in its Prince William campuses near Manassas and Woodbridge. Next year it will open a new 55,000-square-foot, $22 million arts and science building as well as a new workforce development center on the Woodbridge campus. That campus also is expanding its HVAC training program to include smart building technology and the recertification of technicians working in the building trades.

“If you look at typical workforce centers, they are driven by the needs of workers,” says Sam Hill, provost for the Woodbridge campus. “We want to support economic development and the workforce needs of the business sector.”

Sentara also will complete the acquisition of Pratt Medical Group of Fredericksburg. The practice has eight offices in the Fredericksburg area as well as locations in Prince William. “They will integrate into our medical group practice,” Porter says.

“We are taking a community needs assessment and looking at how the community is growing,” Robson says.

Local officials believe all of these factors contribute to Prince William being a bright spot in the economic landscape of the commonwealth. “This is a hopeful place to be,” Stewart says.

Prince William County at a glance