Primland, in Meadows of Dan, and Middleburg’s Salamander Resort & Spa are nominated for the final list, which will be determined by readers’ ballots through July 27. The 10 winners will be named Aug. 7.

Primland, set on 12,000 acres in the Blue Ridge Mountains in Patrick County, opened in 2009 and includes the 18-hole Highland Course, a bentgrass greens golf course named one of the top 100 courses by Golf Magazine.

Salamander, a Forbes Travel Guide Five-Star resort on 340 acres in southern Loudoun County, includes extensive equestrian facilities and a 23,000-square-foot spa. Opened in 2013, Salamander was founded by Sheila Johnson, its CEO, who also co-founded Black Entertainment Television and is a co-owner of the Washington Wizards NBA team, the Capitals NHL team and the Mystics WNBA team.

Other contenders for the 10Best list include Ritz-Carlton properties in Lake Tahoe, Puerto Rico and Arizona; two Four Seasons hotels in Hawaii and two Montana ranches. 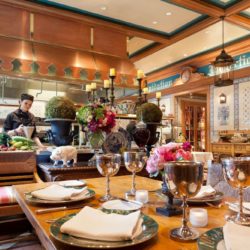