Port of Virginia in midst of major upgrades

Port has $1.3B in investments

For seemingly the first time ever, the shipping and logistics industry dominated all the headlines, Stephen Edwards, CEO and executive director of the Virginia Port Authority, which oversees the Port of Virginia, told a crowd of about 460 at the State of the Port event Thursday in Virginia Beach.

At the annual event, hosted by the Hampton Roads Global Commerce Council, Edwards reviewed the past year of developments at the Port of Virginia. He credited the port’s 470 employees and 2,500 longshoremen and longshorewomen for keeping operations going over the past 25 months of the pandemic.

“They never once said ‘health and safety is an issue we can’t work out together’,” he said.

Thursday’s event was Edwards’ first State of the Port Address, since becoming the CEO and executive director in January 2021.

He highlighted upcoming goals at the port, such as making port operations powered 100% by clean energy, with the initial goal of 2032, but more likely to be achieved early — by 2024 instead. Additionally, the port has committed to have net-zero carbon emissions by 2040.

He also noted that the port has grown about 25% in container volume it has moved in calendar year 2021 vs. 2020 and has about $1.3 billion in investments.

The port has been making upgrades to Norfolk International Terminals and Virginia International Gateway, its two primary container terminals. NIT’s rail capacity is increasing from 350,000 to 610,000 annual container lifts, a $90 million investment and on the north part of the NIT, capacity will grow to 800,000 lift capacity, a $650 million investment. Meanwhile, VIG had an 800-foot expansion. The port is adding cranes and has a solid chassis supply, which help cut down on issues other ports are facing. Another major upgrade coming to the port is a $350 million investment: dredging the port’s channels to 55 feet, making it the widest and deepest port on the East Coast, and the ability to accommodate two-way traffic, which is a huge advantage for the port. Funded half by the commonwealth and half with federal dollars, it will be completed in 2024.

Another major development Edwards highlighted is the work the port is doing to make Hampton Roads and Virginia an offshore wind hub. In October 2020, Siemens Gamesa Renewable Energy S.A. announced it would build an offshore-wind blade factory at Portsmouth Marine Terminal, a $200 million investment. The blades will. be for the Coastal Virginia Offshore Wind project, a $3.6-gigiawatt, $9.8 billion endeavor from Dominion Energy Inc. that involves building 176 wind turbines 27 miles off the coast of Virginia Beach. Dominion will lease space at PMT to assemble the turbines. Construction on the blade factory starts in July, Edwards said.

Edwards spoke about how the $3.8 billion expansion of the Hampton Roads Bridge-Tunnel, from four lanes to eight, will help the port because Interstate 64 is the most used route trucks coming and going from the port use.

They’re much greater, much larger scale, Edwards notes, but pointed out the difference is that the Port of Virginia can resolve outstanding issues and they will get resolved quickly and efficiently as opposed to trying to bring so many economic interests together.

The expansion is expected to create 166 jobs.

Initiative is city partnership with LISC of Hampton Roads 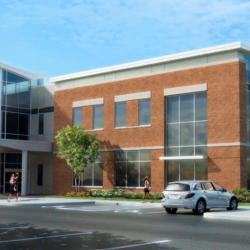