How will the McDonnell verdict change Virginia?

For anyone in the courtroom in early September, the image of a weeping former Virginia governor — and the wails of family members and friends as guilty verdicts were read — remain fixed in memory.

In its intensity, the episode was one of the most profound moments in Virginia political history — and among the saddest. 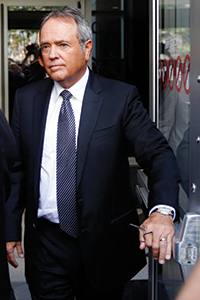 In a criminal proceeding without precedent in the commonwealth, the jury found McDonnell guilty of 11 corruption-related charges and convicted Virginia’s former first lady on eight charges plus one charge of obstruction of justice. The McDonnells were accused of taking gifts and loans from Virginia business executive Jonnie Williams in exchange for promoting his dietary supplements company, Glen Allen-based Star Scientific, and its principal product, Anatabloc. (The company has now changed its name to Rock Creek Pharmaceuticals and moved its headquarters to Florida.)

But while the McDonnells’ future remains unclear as they await sentencing and appeals, the damage to the “Virginia Way,” a tradition of clean government, has been done.

A cadre of national and statewide print, online, radio and television reporters covered every day of the six-week trial this summer. They recounted headline-grabbing testimony about a broken marriage and $177,000 in gifts and loans that Williams showered on the McDonnells, including designer clothing and a Rolex watch.

The trial made the commonwealth titillating material for late-night comedians. Jon Stewart (a College of William & Mary graduate) memorably skewered Virginia on “The Daily Show” in an 8-minute monologue in early August.
Even before the McDonnells are sentenced, the repercussions of the first felony conviction of a Virginia governor already are being assessed.

A bruised brand
It’s just the kind of mess that Kelly O’Keefe is familiar with — a brand gone bad.  He is a professor at VCU’s Brandcenter, a nationally recognized advertising training ground for some of the best talent in the business.

So, is the former governor’s conviction a dose of bad news for the state’s reputation? Of course, O’Keefe replies. “But I wouldn’t say this is a lasting hit to the brand … as long as it’s not followed by similar acts of corruption,” he says.

(Currently, the U.S. Justice Department is investigating the resignation of former state Sen. Phillip P. Puckett, D-Russell, and his consideration for a job on the state Tobacco Commission  and a pending judicial appointment for his daughter. Puckett’s resignation ended a budget stalemate by shifting control of the Senate to Republicans.)

O’Keefe compares Virginia’s bruised image to the damage sustained by Toyota when devastating safety recalls plagued the automaker because of unexpected acceleration problems.

One of the biggest automobile companies in the world, Toyota went into free fall before it dispatched the management team responsible for the blunders. The company also introduced industry-leading production standards and pledged widespread reforms in its operations.

Reforms, O’Keefe says, would not be a bad thing for Virginia’s legislature to think about. “To bring the brand back quickly, we need to bring clarity to our corruption laws,” O’Keefe says.

What the trial exposed, at least for him, is the lack of clarity in Virginia’s regulations on officials accepting gifts and donations. “So it would be terrific if the legislature takes a stand,” O’Keefe says.

He added that government and business leaders also could take the high road, arguing that the jury’s verdict is validation that Virginians hold their elected officials to a high standard of integrity.

A ‘clear message’
Greg Wingfield, president and CEO of the Greater Richmond Partnership, a regional economic development marketing organization, says discussions about the business effects of the McDonnell trial are ongoing.

“We’re having that conversation with clients and prospects,” Wingfield says, emphasizing that everyone remains on point that “Virginia is a pro-business state,” no matter which party’s standard- bearer is in the governor’s mansion.

Wingfield says the jury’s verdict sends a strong signal to all politicians in Virginia. “The jury spoke harshly, but it was a clear message that Virginia is not going to tolerate that kind of behavior,” he says.

For the McDonnells, money — more precisely, the lack of it — seemed to be the driving motivation in their relationship with Williams, according to trial testimony.

Hugh Keogh, former president of the Virginia Chamber of Commerce who also served several governors in an economic development role, believes that, going forward, public opinion will be tilting toward gubernatorial candidates who are financially stable.

“Those who are not vulnerable to the shenanigans we’ve seen,” Keogh says.

He also says the disclosures during the trial about the McDonnells’ troubled marriage will make voters more curious about candidates’ spouses. “It’s inevitable,” Keogh says. “I just hope the voting public is not inclined to snoop around in people’s marriages. But all candidates will undergo closer scrutiny regardless of political affiliation.”

Not blaming the party
Keogh does not believe the McDonnells’ downfall will negatively influence voters’ opinions of the Republican Party or lead to assumptions that one party is more prone to bad behavior than another.

That’s an assessment shared by Larry J. Sabato, director of the Center for Politics at the University of Virginia. “Judging by ethics scandals and trials of public officials that have occurred across the nation in recent times, voters tend to blame the individual, not the party,” he says. “No doubt, Virginia Democrats will try to use McDonnell’s ‘gift-gate’ in upcoming elections, and it is something the Republicans will have to live down.”

Sabato believes that Virginia’s present ethics and corruption laws are open invitations to wrongdoing. Legislators should be held accountable for their votes on ethics reform in the next session of the General Assembly, Sabato says.

“Did they learn anything from McDonnell’s tragedy?” he asks rhetorically. “Are they going to establish an independent ethics commission with subpoena power? Will they stop special interests from paying for lavish trips?”

Loopholes in the law
In the wake of the scandal and indictment of the McDonnells, the legislature earlier this year passed modest reforms, limiting gifts to state officials, spouses and immediate family members to an annual total of $250. The legislation, however, did not limit intangible gifts, such as travel and meals.

Roanoke Times columnist Dan Casey recently compared the gifts described in the McDonnell trial with the new legislation. He was not reassured by his findings.

Here’s an example of what he found:

The notorious $6,500 Rolex that McDonnell’s wife gave to him as a Christmas gift in 2012 (after Williams purchased it for her) probably would not need to have been reported. That’s because it did not come from a lobbyist or businessperson seeking a state contract.

Ditto for the designer clothing and accessories that Williams bought for Mrs. McDonnell.

In short, Casey argues that the revised law enacted by the legislature is weak and would have not required the McDonnells to report most of the gifts and loans they received from Williams, or to report them only in a vague way.

Meanwhile, Casey notes, that unlike Rolexes and designer gowns, the law considers meals, travel and entertainment to be “intangible gifts.”

Limits to legislation
Ben Dendy, president of the Richmond-based lobbying group Vectre Corp., says that while he believes ethics legislation will be considered in the upcoming General Assembly session, there are limits to what kind of legislation can be passed.

“I don’t think you’re ever going to pass any law to make an elected official report taking a Rolex watch,” Dendy says. “The official knows that he should not take the watch, and if he takes one he is unlikely to report it.”

In short, Dendy says, “If someone is going to do something that is wrong, it’s going to be hard to pass a law to stop them from doing it.”

And one thing he says he wants to make perfectly clear. “Jonnie Williams was no lobbyist,” Dendy says. “He was not registered, and he had no professional lobbyist working for him or advising him.”

On Sept. 9, Republican leaders in the General Assembly added their voices to the clamor for reform.

They said they would take whatever additional steps were necessary to rebuild the public’s trust and confidence in government when the legislature reconvenes in January.

“We will re-examine every aspect of our ethics, transparency and disclosure laws … and seek to enact reforms that are stronger and more stringent,” the two GOP legislators said.

A poll by Christopher Newport University released on the same day the opinion piece was published indicated that voters were behind ethics reform.

The university’s Wason Center for Public Policy interviewed 819 registered voters, and 55 percent of the respondents agreed that the General Assembly should enact stiffer ethics rules for elected officials. A total of 68 percent said they agreed with the guilty verdicts handed down to the McDonnells.

Lessons to be learned
John McGlennon, professor of government at the College of William & Mary, says there are several lessons to be gleaned from the McDonnell scandal.

“It is clear to me that there is a growing disconnect between the views of the political world in Richmond and the Virginia population in so far as expectations of integrity,” McGlennon says.

He urges the governor and the legislature to take ownership of the public’s desire for ethical reform and run with it, lest momentum be lost.

McGlennon also recommends a public discussion of what he perceives to be a suddenly changed ethical climate in the commonwealth. “I think it’s going to take something happening now to galvanize popular support and push through a comprehensive package of reforms,” McGlennon says.

An eye on Virginia
To prove its case and to illustrate the interconnected activities between money and gifts from Williams and actions by the governor and his wife, the government relied on an exhaustive inquiry.
Investigators analyzed the length and frequency of cellphone calls and studied credit card transactions, bank deposits and withdrawals.

They looked at text and email exchanges, and they conducted interviews, lots of interviews.

After the verdicts, Adam Lee, special agent in charge of the FBI division in Richmond, issued a stern warning.

“This case sends an important message that the FBI will engage and engage vigorously to any credible allegation of corruption,” Lee said.

Government prosecutors never alleged that McDonnell or his wife broke any Virginia laws. The laws that were broken were federal laws.

Bob Holsworth, a longtime political analyst and a McDonnell appointee to the Virginia Commonwealth University board of visitors, attended nearly every day of the proceedings.

He drew a sobering conclusion to what he had seen and what he had heard both during the trial and afterward.

“It seems to me that federal prosecutors have their eye on Virginia,” Holsworth says, “and they believe that the laxity of Virginia laws and the absence of laws have led to behavior that they think is illegal. I’m not certain that the McDonnell case is the end of it.”