Peter Meredith, the CEO of Meredith Construction Co., was only 6 the first time he walked into the Chrysler Museum of Art, then known as the Norfolk Museum of Arts and Sciences. At the time he was more fascinated with the monumental horse statue outside the museum than the art inside. Now as the chair of the museum’s board of trustees as well as a major donor, he considers the museum to be “a jewel” in Norfolk.

In May the Chrysler reopened its doors after an 18-month renovation and expansion. The redesign of the Chrysler’s 210,000-square-foot interior included the addition of new wings on either side of the front entrance. The added space is being used to display more of the museum’s 30,000-work collection, most of which was donated by auto industry executive and art collector Walter Chrysler Jr. 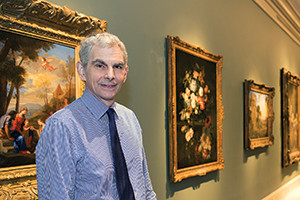 The $24 million project is the latest of three phases of the museum’s $45 million capital campaign. Funds from the campaign also were used to create the museum’s Glass Studio, a full glassmaking facility that opened in November 2011. “People can watch glass being made every day, and they can take a class,” says William Hennessey, the museum’s director. In addition, campaign funds will support the growth of dedicated endowments, which will help ensure the museum’s long-term financial stability.

Before the reopening, the museum was hampered by a lack of gallery space, making it difficult to approach private collectors about loaning or donating their art. Because of the cramped space, many items from the museum’s collection had to be kept in storage. “They deserved to be shown,” says Hennessey. Two restored, oversize Roman statues that are currently on view, for example, had been stored away for 50 years.

The museum’s two new wings house galleries for its American and European painting and sculpture collections and also provide 30 percent more gallery space for its impressive glass collection. “A good number of our galleries, particularly the glass gallery and the ancient worlds gallery, were out of date,” Hennessey says.

The contemporary art gallery features many works that were too large to display before the renovation. One new addition is the 10-foot-tall sculpture that Louisiana artist Keith Sonnier crafted out of sheets of cut and shaped steel that sat in a crate near the museum’s back door for years.

The renovation also brought changes in the status of the Irene Leache Memorial collection of European Old Master paintings, sculpture, tapestries and decorative arts. The 27 works dating from the 14th- through the 19th-centuries have been on loan to the museum since soon after its opening in 1933.  In April the Irene Leache Memorial Foundation gave the entire collection to the museum. “It was the obvious next step for us to make this part of the permanent collection,” says Vickie Bilisoly, president of the foundation.

As part of its gift, the foundation also established an endowed curatorship for European art. Jeff Harrison, the museum’s chief curator, holds the position. “It was the last unnamed, curatorial position at the museum,” Bilisoly says. “We were happy to take this step at this time.”

The recent renovations also addressed accessibility for people with special needs as well as interior accessibility for visitors, making it easier for patrons to navigate through the galleries. An ill-placed elevator had made it difficult for people to move from gallery to gallery. “There was no sight line,” Meredith says. “Now we have open sight lines.”

The museum’s new restaurant, complete with full-scale kitchen and deck overlooking The Hague, an inlet off the Elizabeth River, will be an additional plus as will the newly upgraded HVAC system. The system will better control the humidity and temperature in the building. “It’s energy efficient and green,” Meredith says.

Even though the changes inside will be noticeable to patrons, the architectural style of the Chrysler remains the same. “People like the way the museum looks,” Hennessey says of the overall exterior. “They didn’t want to change it, and we didn’t want people to notice anything different. It fits comfortably in the [Ghent] neighborhood.”

Meredith sees the museum as “the premiere arts institution” in Hampton Roads and one of the top in Virginia. “If we weren’t in the big leagues before, we are now,” he says.