Home Other Global Playing to a world audience

Playing to a world audience

InTune Guitar Picks are used by musicians in U.S. and overseas

Bert LeCato, president of InTune Guitar Picks, says, “Everybody thinks all I do is hang out with rock stars.”  And for good reason:  LeCato has built a highly successful business in the Eastern Shore town of Onancock by catering to artists such as Black Sabbath, Twisted Sister and Alice Cooper.  He manufactures and prints their guitar picks.

He founded the company in 2000 after a year spent on research and testing in what became his proprietary processing of guitar picks.  As a lifelong guitar player and music fan, he knew musicians preferred the quality of American-made picks, so the 26-year-old set out to make them readily available.

Fourteen years later his company employs 11 people making more than 5 million guitar picks annually in the Accomack County facility. In an industry where picks are inexpensive — selling for an average of 35 cents each — volume and quality are very important.

InTune has built its reputation on the high quality of both its manufacturing and printing on the picks. Musicians want logos, signatures — sometimes even their faces — imprinted on picks, which are a significant part of their branding.  Some artists throw dozens of picks out to their audiences during concerts in addition to using them in marketing to fans.

The market is worldwide: 30 percent of InTune’s business is international — a key driver in the company’s annual 10-to-15-percent growth in sales. It ships to more than 50 countries a year, with the U.K. and Canada its oldest and largest international markets. In Asia, its biggest distributor is in Japan.

LeCato began the business in a garage by printing on a few hundred picks a month purchased from a distributor.  “I was a pick company without picks,” he says, noting that he concentrated first on imprinting before he manufactured picks.  He was convinced he could do better printing than what was currently on the market. Having extra time in his shift-work schedule as a firefighter working under contract for NASA on Wallops Island freed him up to focus on guitar picks.

The building’s hallway and LeCato’s office — as well as InTune’s website — are filled with photographs and memorabilia from many top artists. From jazz to country to heavy metal, many musicians are using InTune’s picks. Miranda Lambert, Toby Keith, John Oates, The Scorpions, Jake Owen, Buckcherry, Kenny Chesney, Cyndi Lauper, Craig Campbell and Kelly Clarkson are among LeCato’s long list of clients.

As president, he handles the manufacturing/production/artist relations side of the company.  His wife, Chrissy, who has an associate's degree in business administration with a focus in accounting, manages the administrative/human resources side. The company's retail store stocks the basic strings, picks and sticks, because, as Bert says, “there’s not another guitar store for 75 miles.

“Artists look for a lot of things in a guitar pick,” he says. “The primary things are material, tone, feel, gauge, shape, durability and edging.  Most every artist has a preference.”  He goes into detail about celluloid and delrin (a DuPont trademark), the two most popular materials for picks. Large amounts of the two materials stand in a room near the front of InTune’s building, previously home to Delmarva Power and an FM radio station.

LeCato refined eight steps for processing thousands of picks daily. “We offer an extremely detailed and durable print that has not been seen in the industry before,” LeCato says. 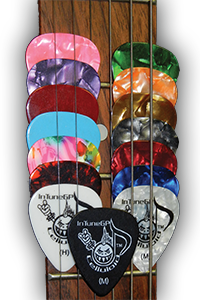 The picks must stand up under the wear and tear of nightly performances. Chris Henderson, lead guitarist of Three Doors Down, said in a 2013 video endorsement online that he likes InTune’s imprinting — his logo on one side and his signature on the other — and the fact that “the picks don’t get chewed up” by playing from his shoulder more than from his wrist, which is easier on picks.

Lastly, Henderson says, “The picks come!” Prompt delivery was an issue with other companies, according to LeCato, when he ordered picks for himself before starting his business.  “I would order picks, and they would take eight months to come — and when they got here, they were usually terrible quality.”

In an interview with PremierGuitar.com before his second sold-out concert at Nashville’s historic Ryman Auditorium last fall, guitarist Hunter Hayes said, “Bert really takes care of us.” He praised InTune for taking “the crazy ideas we send” and coming up with a design his band likes.

A 16-foot by 16-foot inventory room houses rows of shelving with stacked, transparent bins, each filled with a different color or gauge of pick.  Some bins carry labels with artists’ names for which the business keeps a stock of picks; clients in this system can receive their orders within 24 hours.

LeCato built his business largely by word of mouth. “One manufacturer or band told another one or two groups about our picks, and they told a couple more and so on.

“Music is a universal language,” notes LeCato, “and U.S. bands spend a lot of time performing overseas. Word spreads quickly. We also use social media to communicate with our clients and fans around the world.”

The company’s newest international market is Brazil, where it has had two clients for several years, one of which orders more than 200,000 picks a year.  In mid-March, it installed a piece of machinery with new technological capabilities that it expects to increase business by 75 percent this year because of increasingly sophisticated market demands by the music industry. A new part-time employee joined the company with the new machinery, and LeCato anticipates more hires as business picks up (pun intended).

George W. Bryan, a director on the board of the Eastern Shore of Virginia Chamber of Commerce and analyst for the Small Business Development Center in Hampton Roads, says, “Other than the poultry employers, the hospital, New Ravenna and a few others, InTune ranks among the top 5 percent of employers on the Eastern Shore.  The LeCatos are good role models for small business. They participate and give a lot.”

BRAZIL’S ECONOMY
Strong consumer spending boosted Brazil’s economy by 2.3 percent in 2013. Because InTune Guitar Picks sells a custom product, it requires payment in U.S. dollars before production begins.  The company ships to Miami, where Brazilian clients make arrangements for shipping beyond that point. LeCato says that unlike the U.K., where his business is spread among private labelers and thousands of individuals, Brazil basically has two companies importing picks.  “It’s almost impossible for individuals to import them because of high customs duties.”

ACCOMACK COUNTY’S ECONOMY
With a rich heritage in agriculture and industry, Accomack County also has a northern tip with a globally significant wildlife habitat on Chincoteague and Assateague.  Tourism — including easy access to the Chesapeake Bay and Atlantic Ocean — is important to the economy, as are the many special events and festivals in the county’s small towns.

Editor's note: Virginia Business has corrected an earlier version of the story. We regret the errors.