Along with emitting a potent odor, manure produced by the nearly  75 million hogs in the U.S. generates methane, a greenhouse gas 25 times more harmful to the atmosphere than carbon dioxide.

However, Virginia’s largest electric utility and the world’s largest pork producer have teamed up to combat the latter problem by transforming these emissions into clean energy. In late 2018, Dominion Energy Inc. and Smithfield Foods Inc. announced the formation of Align Renewable Natural Gas (RNG), a joint venture that will harness methane emissions on clusters of Smithfield-owned and-contracted hog farms across the United States, converting the emissions into clean energy to heat homes and power businesses. On average, methane generated from each group of 15 to 20 hog farms could power 2,800 to 6,000 homes. By 2029, Align RNG is projected to power approximately 70,000 homes.

Dominion and Smithfield’s collaboration is the country’s largest renewable natural gas partnership related to agriculture and one that the companies say will transform the future of sustainable energy and agriculture.

Both companies have been pursuing the use of renewable energy in their respective industries, adds Kraig Westerbeek, senior director of Smithfield Renewables, a platform the company formed in 2017 to accelerate its carbon reduction and renewable energy efforts. “Our company goals are similar,” Westerbeek says. “Smithfield is a leader in animal production, and Dominion is a leader in the energy sector. It’s a very natural fit.”

Also known as biomethane, renewable natural gas is a pipeline-quality gas that can be used as fuel. It’s produced by the decomposition of organic material. Covered lagoons called anaerobic digesters capture the waste from hog farms, breaking down the solids and containing methane emissions. A low-pressure biogas transmission line transports the gas to a central conditioning facility where it is converted into RNG. From there, existing underground natural gas distribution lines deliver the gas to homes and businesses.

According to Dominion officials, there is no risk of explosion. In addition to the low-pressure pipes, the untreated methane is about 30% to 40% carbon dioxide, which has an extinguishing property.

“RNG is very unique,” Childress notes. “It’s the cleanest source of energy available in the U.S.”

Along with heating homes and businesses, renewable natural gas can be used in a variety of other markets, including powering electric vehicles, Westerbeek says. “RNG offers a lot of benefits. It can be sold for any purpose [for which] natural gas is used today.”

Individually, Dominion and Smithfield Foods have long been exploring ways to enhance their use of clean energy. Virginia’s largest electric utility, Dominion uses mainly fossil fuels to power its generation plants. However, the company is increasingly turning to other energy sources. Dominion has the fourth-largest solar farm portfolio in the nation and is one of three utilities in the U.S. to reduce its carbon intensity by more than 40% over the last decade. On the natural gas side, the company reduced methane emissions by 25% between 2010 and 2018, mainly by replacing older infrastructure with more efficient equipment, as well as by capturing and recycling methane previously vented during maintenance back into the system and by expanding leak detection measures. According to Dominion, its methane reductions have the equivalent environmental impact of taking 1.3 million gasoline-fueled cars off the road for a year or planting 103 million new trees.

Meanwhile, Smithfield Foods, which aims to reduce its greenhouse gas emissions by 25% by 2025, has been studying opportunities for converting manure to energy for several decades. “Forty percent of Smithfield Foods’ carbon footprint is associated with manure management activity,” Westerbeek notes. “These biogas projects are really helping us.”

Dominion and Smithfield each initially invested $250 million in RNG projects in Virginia, where both Dominion and Smithfield are based; North Carolina, one of Smithfield’s largest operating states; and Utah, headquarters for Dominion’s western operations. However, last year, the companies doubled their investment to $500 million. With the additional investment, Align RNG is projected to power more than 70,000 homes and businesses by 2029.

“We determined there were more opportunities and expanded the program,” Childress says. “This is the same as taking 500,000 cars off the road annually from that $500 million investment or planting 40 million new trees. That’s a really good return on our investment.”

Align RNG’s first project involves a cluster of more than two dozen Utah hog farms, mostly owned by Smithfield Foods. It is expected to start producing gas this spring, providing power to more than 3,000 customers when it reaches full capacity.

In Virginia, approximately 20 Smithfield Foods-owned hog farms around Waverly and Wakefield are in the design and engineering phase of establishing digesters to capture methane. The project is expected to come online in 2021 and will eventually provide energy to 4,000 homes and businesses. Other farms could be added to the original group or formed into a new cluster.

“When choosing where to establish projects, we look for areas with high density of animals that are close to a natural gas distribution line,” Westerbeek says. “It’s a great opportunity for our contract partners to be part of these and have a return on their investment. It’s better than any investments they could make on their farms.” Farmers participating in the initiative will receive a portion of the proceeds from energy produced on their farms.

Childress compares the clusters to a hub-and-spoke model, with a gas-upgrading facility in the center connected to each farm via plastic pipelines. “We’re bringing together small and moderate-size farms and networking them as they join in a hub-and-spoke model to create economy of scale,” he says. “We view these projects as a triple win. It’s a new revenue stream for farms, good for customers wanting more sustainability and lower carbon forms of energy, and it helps the environment by capturing 25 times more emissions.”

Align RNG builds on Smithfield’s Optima KV pilot project in Duplin County, North Carolina, which collects biogas from digesters on a collection of hog farms, processes it to pipeline-grade natural gas and injects it directly into a natural gas pipeline running through eastern North Carolina. Smithfield sells the biogas to Duke Energy. “That project gave Smithfield confidence for Align RNG,” Westerbeek says. “A foundational base of knowledge is precursory.”

Last summer, Dominion and Smithfield launched North Carolina’s largest renewable gas project, locating it in Duplin and Sampson counties, which rank among the top areas in the U.S. in hog and pig sales. The project is patterned after Optima KV. Annually, RNG produced from the hog farms is expected to generate enough energy to power more than 3,500 homes.

Although Align RNG was announced as a 10-year venture, both Dominion and Smithfield expect it to continue indefinitely. “We want a lot of the projects done in 10 years, but there are certainly opportunities for it to go a lot longer,” Westerbeek says. He adds that Smithfield intends to have 90% of the finishing space — farms where hogs are raised to market weight — in Virginia and North Carolina involved in manure-to-energy projects over the next several years.

At the end of a decade, Dominion hopes to yield enough energy from the RNG projects to reliably serve about 70,000 homes and businesses. “For us, this is a sustainable business model,” Childress says. “It provides new revenue for farmers and is environmentally sound. This is an important part of our portfolio. Align will be around for a long time.”

In addition to its RNG project with Smithfield, Dominion late last year joined forces with Vanguard Renewables and Dairy Farmers of America in the first nationwide network of waste-to-energy projects involving dairy farms. Using the same model as Dominion’s venture with Smithfield, cow manure will be stored in covered digesters on a cluster of dairy farms, where bacteria will break it down to produce methane. The methane will then be transported via underground gathering lines to a central conditioning facility where it will be converted to RNG. Combined, the hog and dairy projects are expected to generate enough clean energy to heat almost 100,000 homes while significantly reducing greenhouse gas emissions from farms across the nation.

That, says Childress, is on target with Dominion’s goals to produce new forms of clean energy. “We are committed to growing the amount of RNG produced in the U.S.”

Cities plan to combat sea-level rise, but is it enough? 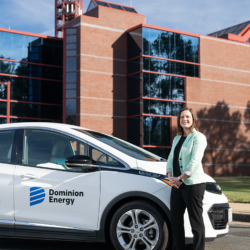