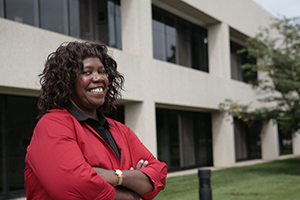 Barbara Monroe shares a lot of history with the Philip Morris Manufacturing Center in South Richmond.

Monroe joined Philip Morris in 1972, the year before the manufacturing center opened, and she has worked at the 1.6 million-square-foot factory since 1978.

Monroe, 60, now works with cigarette filters in a high-tech facility where some machines can produce 20,000 cigarettes a minute. It’s a far cry from her first job as a 19-year-old stripping tobacco leaves.

“It’s a lot less manual work,” says Monroe, a mother of two grown children who worked night shift for 25 of her 35 years at the South Richmond plant.

Monroe knew she when she came to work at the manufacturing center that it was a place she wanted to stay.  “People were so helpful…It got better and better,” she says.

Monroe plans to retire next year.

Philip Morris USA marked the 40th anniversary of the factory on Thursday with a media tour.

With the closing of another cigarette plant in North Carolina about five years ago, the South Richmond manufacturing center, which sprawls over 43 acres, is now the one place in the U.S. making Philip Morris cigarettes, including the nation’s leading brand, Marlboro.

In consolidating its operations, Philip Morris moved some of its equipment from North Carolina and beginning in 2007 invested $210 million updating the Richmond factory.

The manufacturing center produces 600 million cigarettes a day, accounting for half the cigarettes sold in the U.S. (New York-based Philip Morris International, which was spun off in 2008, makes its cigarettes in foreign countries.)

Philip Morris has a long history in Richmond, producing cigarettes in the city for more than 80 years. Its parent company, Altria Group, moved its headquarters from New York to Richmond five years ago. The company employs 4,000 workers in the Richmond area, more than half of whom work at the manufacturing center.

Altria’s other properties in the area include a research and technology center in the Virginia  BioTechnology Research Park in downtown Richmond and the Park 500 plant in Chester. 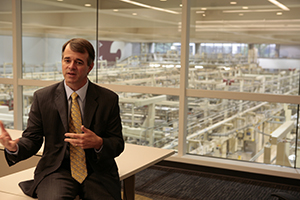 Philip Morris USA is run by Billy Gifford, a graduate of Virginia Commonwealth University who grew up in Hanover County. He joined the company 19 years ago as an accountant and rose through the ranks to become CEO in 2010. His purview also includes Altria’s John Middleton cigars but not its U.S. Smokeless Tobacco Co., whose products include Skoal and Copenhagen.

Another Altria subsidiary, Nu Mark, is testing two new products, MarkTen, an electronic cigarette and Verve, a chewable polymer disc containing nicotine. MarkTen is available in Indiana while Verve is being sold in stores in an area stretching from Richmond to Norfolk.