Home News Perspecta to be acquired for $7.1B in all-cash deal

Perspecta to be acquired for $7.1B in all-cash deal

Perspecta will combine with Peraton under the transaction, which is expected to close during the first half of 2021, according to a company statement. Veritas holds approximately 14.5% of Perspecta’s shares outstanding, already making them a significant Perspecta stockholder.

“As a long-time investor in Perspecta and its predecessor companies for over a decade, we have always recognized Perspecta for its market differentiation, leading-edge IP, and focused execution in the government technology space,” Veritas Capital CEO and Managing Partner Ramzi Musallam said in a statement. “Through the combination with Peraton, we have assembled a strong portfolio of top-tier government technology providers with complementary offerings and are confident that the addition of our resources and industry expertise will enable Perspecta to deliver even greater value to its customers and stakeholders.”

Perspecta had a closing stock price of $19.60 on Nov. 6, 2020, and Perspecta stockholders will receive $29.35 per share in cash under the deal. Perspecta employs more than 14,000 workers and won several large federal contracts this past year, including an $824 million, five-year deal with the National Geospatial Intelligence Agency. Perspecta Chairman and CEO Mac Curtis in November 2020 dismissed rumors of a potential sale, chalking it up to “market speculation,” according to reports.

“Together with Peraton and with the flexibility Perspecta will have as a private company supported by Veritas, Perspecta will be well positioned to build on our momentum and continue executing on customer commitments as Perspecta delivers cyber, digital-transformation and mission-focused solutions,” Curtis said in a statement issued Tuesday. “Looking ahead, Perspecta remains fully committed to serving our customers with dedication, integrity and excellence and ensuring a seamless transition for our employees.”

Perspecta did not have any further information about what Curtis’ role would be in the combined company and whether it would be branded as Peraton following the closing of the transaction.

With $4.5 billion in fiscal 2020 revenue, Perspecta was launched in June 2018 as a result of a three-way merger between Vencore Holding Corp., KeyPoint Government Solutions and the U.S. public sector business of DXC Technology. Prior to leading Perspecta, Curtis was Vencore’s president and CEO.

The Perspecta acquisition marks yet another major purchase by Peraton of a Northern Virginia-based federal contractor. In early December 2020, Falls Church-based Fortune 500 aerospace and defense contractor Northrop Grumman Corp. announced it would sell its federal IT and mission support services business for $3.4 billion in cash to Peraton. The transaction is also expected to close during the first half of 2021.

Earlier in 2020, Tysons-based Fortune 500 IT services company DXC Technology completed the sale of its U.S. State and Local Health and Human Services business to Veritas Capital for $5 billion. The transaction closed in October 2020 and forms a new company called Gainwell Technologies, which will operate as a standalone company with more than 7,500 employees. It will focus on Medicaid management information systems, fiscal agent services, program integrity, care management, immunization registry and eligibility services. 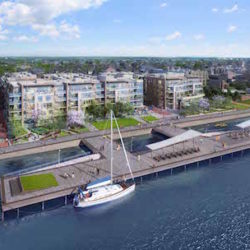