When he was a Thomas Nelson Community College faculty member, John T. Dever would drive from its campus in Hampton to teach evening classes at Newport News Shipbuilding’s apprenticeship program.

Sometimes colleagues would question why he wanted to make the drive “when you can just walk down the hall” to teach another class, recalls Dever, who has been TNCC’s president since 2011.

His response then as now underscores the importance he sees in the connection between community colleges and the local economy.

“I had these students who’ve worked eight hard hours, and they’ve got me for three more,” he would tell his colleagues.  “And they’re always there; they’re always prepared; and they always participate.”

What he learned from his shipyard students, he says, “was the power of people who understood what they were learning and what it meant in terms of a career.”

TNCC, which will mark its 50th anniversary next year, offers multiple pathways to careers, including industry partnerships that provide training in advanced integrated manufacturing and guaranteed transfer agreements with four-year institutions that allow students to pursue bachelor’s degrees.

New workforce credential grants from the state facilitate a more immediate route to employment and save students two-thirds of the cost of training for high-demand positions such as welders, commercial truck drivers and pharmacy technicians.

Fourth-largest college
TNCC’s mission is to meet students “where they are and take them as far as they want to go,” says Dever, who served on the college’s faculty from 1975 to 1995.

Named for a Virginia signer of the Declaration of Independence, TNCC also operates a campus in Williamsburg.

An agreement signed in April with Old Dominion University will allow students interested in cybersecurity to obtain their associate of applied science degree at TNCC before completing their bachelor’s at ODU.

The agreement builds on the existing cybersecurity focus at TNCC, which hosts an annual regional conference for professionals. “It’s amazing. It’s a packed house,” says Lisa Wornom-Zahralddin, who attends the conference each year.

As assistant vice president for private-public partnerships for the Peninsula Council for Workforce Development, Wornom-Zahralddin says she has seen a growth under Dever in collaborative efforts to determine the needs of the region’s industry and defense sectors. “They really ask,” she says of college officials.  “For a small campus they are very nimble.”

Raising a bridge
More than 40 percent of TNCC students are age 25 or older, and they are among the college’s best students, Dever says. “When they return, they always know why they are there.”

And about 28 percent of TNCC students have a military connection. Douglas Thompson, who left the Navy in 1994, fits both categories.  He has worked in the home improvement industry while completing his associate degree in technical studies with a concentration in industrial technology.

On a recent afternoon, Thompson was in the mechatronics lab fine-tuning the design of an electro-pneumatic circuit to raise and lower a drawbridge.  Mechatronics is the combination of industrial electronics, mechanical systems and computer technologies.

“You don’t come out of high school knowing this,” Thompson says.  “They go from zero to 100 teaching you.  They start at the bottom and go to the top.”

While in the Navy, he became familiar with schematics but says he didn’t have an opportunity to turn a concept into a design. “This is just super interesting. It will keep your mind working,” Thompson says as he demonstrates how interlocking buzzers and lights work to operate his drawbridge.

Rich Wilcox, an assistant professor in the mechatronics program, vouches for Thompson’s design.  “If it works here, it will work in the real world.”

The mechatronics lab is housed next to the Hampton campus in the New Horizons Regional Education Center, a partnership with area school districts. High school students take dual-enrollment courses in the lab in the morning. In the afternoon and evening, adult students also can study for the Siemens Mechatronics Level 1 and Level 2 certifications under instructors trained in Germany by the manufacturing and electronics conglomerate.

That sort of mechanical training appealed to Rachel Smith, who is working toward advanced certification. After earning Level 1 certification last year, she quickly found a job with a company that allows her time to pursue higher certification.

Smith, who previously was enrolled in a health program, says she grew up watching her father, a Navy electronics technician, “fix everything. I always thought I wanted to be like that.”

One day she happened to see a mechatronics brochure and realized “I needed to follow the mechanical side of my interest.”

“Thomas Nelson trains our community, whether it’s our truck drivers up and down the road or our welders at the shipyard,” says Michelle Manfred, director of corporate training, credentials and apprenticeship programs. 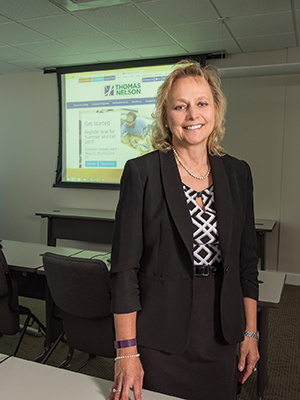 Manfred has a personal perspective on two of the career tracks students can follow. One of her twin sons is in a two-year, guaranteed-transfer program. He plans to go to Virginia Tech.

The other twin is an apprentice at Newport News Shipbuilding, earning a salary while getting a college education and learning to make metal in the shipyard foundry. “I like to dispel the rumor that community college is for students who couldn’t get in anywhere else,” Manfred says. With her twins, “the bottom line is, it came down to economics.”

TNCC is working with employers to add to the list of apprenticeship programs, she says.  Some programs already offered include a welding apprenticeship with Liebherr Mining, automotive mechanic training at Naval Weapons Station Yorktown and child-nutrition courses for Newport News Public Schools.

Apprenticeships represent an advanced form of work-based education. Actually a centuries-old concept, an apprenticeship increasingly is viewed as a modern way to train workers for the highly technical jobs of the 21st century.

Registered apprenticeship programs must follow Virginia Department of Labor and Industry rules and lead to a nationally recognized and portable credential, Manfred says.

TNCC has customized associate degree programs for The Apprentice School and in 2000 launched a design co-op program to support the need for designers at the shipyard, Miller says.

Higher education’s partnerships with industry and employers yield a private benefit and a public good, Dever says. The return on taxpayer investment is high, he says, pointing to an economic analysis conducted for the college in fiscal 2014-15.

With 933 full- and part-time employees, Thomas Nelson and its students contributed $329.6 million in added income to the Peninsula region that year, the report found. State and local taxpayers paid $25 million to support the college, receiving an average annual return on investment of 20 percent, according to the analysis. 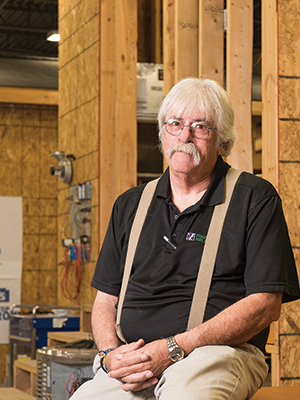 But individual benefits accrue, too.  In the back of the Goodwill Industries operations center in Hampton, Jerry Hemenway, a trades navigator for TNCC, teaches students skills that will help them enter the workforce.

His classroom contains partially framed structures for hands-on electrical and HVAC training, plus rows of appliances, sinks and toilets to test the repair skills of future facility maintenance technicians.

The college’s Center for Building and Construction Trades, in what was once a Target store, represents not just a co-location with Goodwill but also a collaboration.

“This is a partnership with Goodwill,” Hemenway says.  Goodwill offers help with “the soft skills” students may need to prepare for interviews or understand how to conduct themselves on the job. His students might not “leave here a journeyman,” he says, but they will be ready to start a career.

The ultimate goal, of course, is employment. “If we don’t get these kids jobs, then we’re not doing anything,” he says.