The Pamunkey Indian Tribe has proposed a $350 million, 275-room resort hotel and casino in Richmond, the tribe announced Friday as the Virginia House of Delegates considers legislation to allow the Pamunkey to pursue commercial gaming in Norfolk and Richmond.

The resort will include a four-diamond hotel tower with a spa, pool, fitness center and several restaurants, as well as a 1,000-space parking garage.

The tribe, which is also moving toward full approval of a casino and resort in Norfolk, says this project will attract 4 million annual visitors and create more than 1,500 permanent full-time jobs, in addition to more than 1,000 construction jobs, according to a revenue forecast the tribe commissioned.

The resort and casino would be located on 36 acres in South Richmond along Ingram Avenue near Commerce Road, on three adjacent land parcels.

“We view this as a destination resort and casino,” said tribe spokesman Jay Smith, drawing people from all over the state. The 4 million visitor estimate comes from a revenue forecast the tribe commissioned, Smith added.

Jon Yarbrough, the Tennessee billionaire investor partnering with the tribe on its Norfolk project, has optioned or contracted land for the Richmond project and has closed on at least one of the properties, Smith said.

Sales prices for the privately owned land have been set, but Smith declined to disclose the full cost.

“We’ve spoken numerous times with city officials,” including elected officials and staff, said Pamunkey Indian Tribe Chief Robert Gray in an interview Friday, adding that the city government is supportive of the tribe’s plan to bring the casino to the Manchester area, which Gray said is part of the tribe’s ancestral homeland.

“The Pamunkey Tribe has had close ties to Richmond for several hundred years,” he said. “We saw a lot of development potential in that part of the area.” He added that the tribe would encourage further investment in Richmond’s Manchester area, which has seen fits and starts of development over the past two decades, mostly residential.

“The mayor is excited about the opportunity to bring a resort-style casino to Richmond,” said Jim Nolan, press secretary to Richmond Mayor Levar Stoney, in a statement. “We’ll wait to see what happens in the General Assembly and what it means for the city.”

A timeline has not been announced on the project, but the Norfolk casino has taken more than a year to move toward City Council approval. The General Assembly is considering legislation this session that would allow limited casino gaming in Portsmouth, Norfolk, Richmond, Danville and Bristol, restricted to one casino per locality, with operators being required to invest at least $200 million or more in each project.

Gray said that once the General Assembly session is over, he’d like to have “shovels in the ground as soon as possible.” As for whether the Richmond casino might open before Norfolk’s, Gray said he’s not sure. “I hadn’t really put that much thought into it.”

He added that the casino would have slot machines and table games, as well as events and entertainment, but “nothing to cannibalize what the city of Richmond is offering,” Gray added.

The casino land is part of a federally designated opportunity zone, one of 212 in the state, which allows investors to defer capital gains taxes by putting money in projects in lower-income areas. However, Gray said the tribe does not plan to take advantage of opportunity zone status or other available tax benefits.

“We’re not looking for any handouts. We’re not Amazon,” Gray said. “We want to bring this venture to Richmond and pay a fair price for the land.”

The tribe is waiting to see what happens in the General Assembly, which is considering allowing commercial casinos in the state, before presenting the project for Richmond City Council approval. Because the tribe’s casino project in Norfolk is on city-owned land, and Richmond’s is on private land, the process is a bit different, Gray and Smith said.

According to property records, 1401 Commerce Road is an 18-acre commercial office and warehouse development currently occupied by Dominion Energy, the city of Richmond and other companies. Assessed at $2.7 million in January, the land is managed by Harper Associates, a commercial real estate firm in Richmond. The 1120 Gordon Avenue property is listed as 12 acres assessed at $4.985 million, and it is managed by Chesterfield Commercial Realty.

Principal Broker Terry Earnest said he could not comment on the Gordon Avenue deal because he had signed a confidentiality agreement with the prospective purchaser.

Gray said he wants to help members of his tribe find jobs, both in Richmond and Norfolk.

The tribe also has secured a 13-acre property on Richmond’s Jefferson Davis Highway near Walmsley Boulevard, which would be used to build a workforce training facility. Ultimately, that property will have a different use once the resort opens, such as a grocery store or health clinic to benefit the community, the tribe says.

“We want to talk to the community and see what they want,” Gray said. 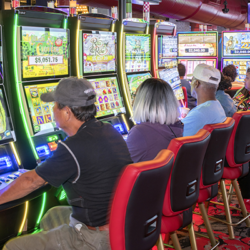