Pain beyond the pump

To help offset fuel surcharges for deliveries, Patel, CEO of Sina Hospitality, placed larger orders for the linens, toiletries and other dry good items that his employees need to stock the Richmond-area hotels his company operates. “Kind of like everybody’s stockpile during COVID,” Patel said Wednesday. “Same thing with us, you know — the gas prices are higher, we know they’re higher and so the right thing to do is to stockpile as much as we can.”

Gas prices continue to surge as Russia’s war with Ukraine results in mounting sanctions coupled with Tuesday’s ban on Russian oil imports announced by the Biden administration. The average price of regular unleaded gas in Virginia hit $4.18 per gallon Wednesday, topping the record set only a day earlier, when the cost increased to $4.10, according to AAA. While Virginia lags slightly behind the national per-gallon price of $4.25, prices in Northern Virginia were among the highest in the state, with Fairfax County hitting $4.31 Wednesday.

Chris Thompson is vice president of business development for Harrisonburg-based third-party-logistics firm InterChange Group. In addition to warehousing, the company operates about 60 tractor-trailers. InterChange negotiates fuel charges with customers on a sliding scale, which have increased along with fuel prices.

“Fuel for a trucking company is one of our single largest expenses,” Thompson said. “When you start seeing fuel – I saw it locally here today over $5 – that starts to get extremely expensive. Before long, if those prices continue to inch up, you’re looking at nearly $1 a mile to run a truck.”

That’s a cost that might ultimately get passed along to the consumer, Thompson said.

If high fuel prices drag on into the spring and summer months it could have a drastic impact on the already struggling travel and leisure industries, which are still continuing their recovery from the COVID-19 pandemic, said Virginia Restaurant, Lodging and Travel Association President Eric Terry.

A more immediate effect might be borne out on the supply chain. Food prices have already increased dramatically with inflation; Terry said he’s concerned that food suppliers will also see dramatic increases.

“I think it has a potential to kind of have a one-two punch on the industry,” Terry said.

Nick Patel is president of Kalyan Hospitality, which operates several limited-service hotels along Interstates 95, 64 and 81. Higher gas prices have historically translated to lower occupancy, and with spring break approaching, he’s witnessing a similar trend. He’s also bracing for additional surcharges for supplies. If those keep up over the long term, he anticipates having to compensate by raising nightly room rental rates.

“It’s a trickle-down effect for everything,'” he said. “Goods, I mean, A to Z, it’s gonna affect us everywhere.”

Ravi Patel is also bracing for price increases for supplies. Sina is constructing a hotel in Chester, which it expects to open in June, and has three other hotels under development. Freight quotes that were good for seven days are now good for about 24 hours, he said. Increasing costs could force the company to expand budgets.

While he said it’s difficult to say if decreases in current occupancy are the direct result of gas prices, Patel said he’s fearful that prolonged high prices could lead families to halt summer travel.

“A family of four, you’re not going to go to the beach, or go up and down 95 if you can go five minutes from your house and go do something outside,” he said, “You’re not going to stay at a hotel because all your hotel money is gonna get eaten up in gas.” 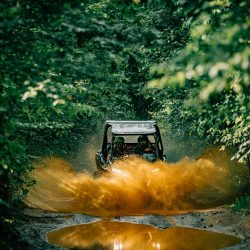