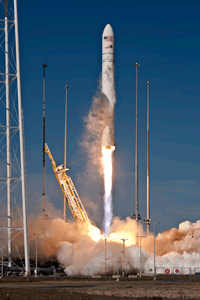 The Dulles-based company is hoping to become the second private space company to regularly service the space station.

If the mission is successful, Orbital will begin regularly scheduled cargo delivery missions to the ISS under a $1.9 billion contract with NASA. Under the contract, Orbital will deliver about 20,000 kilograms of cargo to the ISS in eight missions through 2016. Items to be delivered include food, clothing, crew supplies, spare parts and equipment, and scientific experiments.

“Over the next few days, our Cygnus team, together with our NASA partners, will conduct an extensive series of in-orbit tests to verify the performance of the spacecraft before attempting the rendezvous and berthing operations with the space station,” David W. Thompson, Orbital’s president and CEO, said in a statement. “There is clearly still a lot of work in front of us, but the mission looks like it is off to a great start.”

Earlier this month, an Orbital Sciences Minotaur rocket launched NASA’s Lunar Atmosphere and Dust Environment Explorer (LADEE), which is on a 30-day journey headed to the moon. That launch also occurred from Wallops Island.