Home News Reports On the move

In one of the biggest banking mergers in recent history, BB&T Corp. and SunTrust Banks Inc. combined to become Truist Financial Corp. in a $66 billion deal that creates the sixth-largest bank in the country. Camden, Lee and O’Neill have all been named presidents in Truist’s western, central and northern markets in Virginia. Although the deal closed in December, it’s expected to take two years for all operations to merge and for branches to consolidate. The three Virginia region presidents (out of 24 nationwide) are all SunTrust alums with decades of banking experience.

Based in Arlington, DaSilva will lead the     $25 million statewide network that includes four regional nodes led by state universities. After teaching at Virginia Tech for 17 years, he was a professor of telecommunications at Trinity College in Dublin, Ireland, and he directed CONNECT, a coalition of 10 Irish universities that researches networks supporting the internet of things. DaSilva starts his new job in March.

At the start of the year, former Philip Morris USA President and CEO Fleet took the helm of Colonial Williamsburg. He’s a Williamsburg native and teaches business at William & Mary. The living history attraction, which will celebrate the nation’s 250th anniversary in 2026, has been through difficult times in recent years, facing declining revenues and visitation.

Fritts arrived in Richmond in August, just as discussion of the ill-fated $1.5 billion Navy Hill proposal was heating up, along with a burgeoning high-tech hub in eastern Henrico County and major developments coming to Chesterfield County. With a strong economic development pedigree that included recruiting Amazon and UPS to Salt Lake City without offering local tax incentives, Fritts says she wants to make the Richmond region irresistible to several industry sectors: IT, corporate headquarters, life sciences, logistics and distribution.

As the General Assembly moves to legalize gaming in the state, Gray’s tribe — in partnership with Jon Yarbrough, a billionaire investor from Tennessee — has proposed two casinos: one at Norfolk’s Harbor Park, which has obtained approval from Norfolk City Council, and the second in Richmond’s Manchester area. Gray says his main goal is to create jobs for members of his tribe and use gaming revenue to improve infrastructure at the reservation.

In August, Keene was promoted from chief operating officer to CEO of SAIC, an engineering and IT contractor with annual revenues of about $6.5 billion. She said in the company’s earnings call in December that SAIC is focusing on several growing markets, including space systems and mission engineering, and investing in developing talent and infrastructure. Last year, SAIC purchased Chantilly-based Engility Holdings, an engineering and logistics firm, for $1.5 billion. And this February it announced plans to acquire Reston-based Unisys Federal for $1.2 billion. In January, the U.S. Air Force awarded SAIC a $727 million contract to move mission applications for the Air Force and Army to the cloud.

Even if cryptocurrency seems a bit … cryptic to you, Larimer is an influencer in the industry. A Virginia Tech alum, he was the keynote speaker last fall at Tech’s inaugural Blocksburg blockchain summit conference. Last June, Larimer and Block.one CEO Brendan Blumer unveiled Voice, a blockchain-based social network. In 2018, Block.one raised $4 billion from the largest initial coin offering in history — and last year, it agreed to pay $24 million (in dollars) in civil penalties for breaking U.S. securities rules during the IPO.

After 40 years in the energy industry, Loving was promoted in January to chief administrative officer at BWXT, which was awarded nearly $4 billion in contracts from the U.S. Naval Nuclear Propulsion Program in 2019. Loving was hired as BWXT’s senior VP for human resources in 2016, and he previously worked for the Lynchburg nuclear fuel supplier from 1997 to 2007.

Following Virginia’s legalization of the commercial growth and processing of industrial hemp, a lot of farmers began planting the crop. And Moore’s Rural Retreat farm business, announced last October, will be Virginia’s first commercial industrial hemp fiber processing facility. A Wythe County native and nurse practitioner in Wytheville, Moore is partnering in the business with her husband, Chris. During the next three years, Appalachian Biomass plans to create 13 jobs and purchase more than 6,000 tons of Virginia-grown hemp, at a value of more than $1 million.

Last August, Connected Solutions Group, which sells mobile devices specified to companies’ needs, was ranked No. 8 on the 2019 Inc. 5000 list of the fastest-growing private businesses in the country. No other Virginia company broke the Inc. 5000’s Top 10 list last year. Pittman started Connected Solutions in Hanover County in 2015. Its revenues have grown by 12,701% from 2015 to 2018, when it sold $23.3 million in products. That’s a long way from reselling used BlackBerry phones on eBay, which is how Pittman got his start in the wireless business.

In 2019, Gannett merged with GateHouse Media’s parent company, New Media Investment Group, a $2.3 billion deal creating the largest newspaper company in the country. (One in five U.S. newspapers now belong to Gannett.) Reed comes from GateHouse Media, which he joined in 2006 as its CEO, and says his focus is a full transformation to digital news at the company’s 266 daily publications. Layoffs also are on the menu, as Gannett plans between   $275 million and $300 million in savings.

After a year on the job, Romanello is seeing Sandston’s White Oak Technology Park become a data center hub, and in the northern end of the county, a new indoor-sports arena is taking shape. Facebook and QTS Data Centers are both investing millions of dollars to build millions of square feet of data center space at White Oak, where two high-capacity subsea cables link at QTS’s Mid-Atlantic Network Access Point. At Virginia Center Commons, local developers Rebkee Co. and Shamin Hotels have purchased property to open the arena and an accompanying hotel.

In September, Salvino took the reins at DXC Technology, the Hewlett Packard spinoff IT company that merged with Computer Sciences Corp. in 2017. Salvino’s background is in human resources and tech investment, and before joining DXC, he was at Carrick Capital Partners and previously at Accenture, where he led the firm’s business process outsourcing practice. In March, Salvino is bringing on a new chief information officer, Chris Drumgoole of GE, the latest of seven additions to his leadership team.

Singh’s IT management company is headquartered in Reston, but the CEO’s heart is in Blacksburg, where he grew up and got his engineering degree. In August 2019, 1901 Group broke ground in the Virginia Tech Corporate Research Center to expand its location to a 45,000-square-foot building. Singh’s reason for splitting the business between Blacksburg and Reston is to help build the company’s tech employee pipeline, he has said.

Tucker is a newcomer to Northern Virginia, having recently arrived in Arlington after serving as the city of Danville’s economic development chief. He is now in the center of the action — particularly as Amazon.com Inc. launches its $5 billion HQ2 development. Tucker also has worked in community development and as a middle-school teacher. He says supporting small businesses is a key goal for him in his new position, even as global companies jockey for space nearby. (See interview on Page 37.)

President of a construction company that has contracts to widen Interstate 66 and add Interstate 495 Express Lanes, Yergin-Doniger also is making his mark as a philanthropist and volunteer. He even volunteered as a firefighter for six years in Fairfax County. Today, he is president of the Heavy Construction Contractors Association and founded its leadership institute. A James Madison University graduate, Yergin-Doniger joined WG in 2007 after working at Chantilly-based development company William A. Hazel Inc.

Yousuf was named president of the newly merged Bon Secours Mercy Health System’s Richmond market in December, five months after joining the company as the Atlantic Group’s chief strategy officer. Yousuf has worked in health care for more than 15 years, including serving as president of LifeBridge Health in Maryland. Seven hospitals, including St. Mary’s in Richmond, fall under Yousuf’s purview. 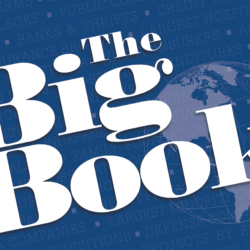 The 2020 list of Virginia business leaders who get things done