Home virginia-meetings On the road again

On the road again

Business and leisure travelers are putting the pandemic in the rearview mirror and once again are filling Virginia hotels and resorts. While that’s good news, widespread staffing shortages continue to hamper the hospitality industry.

Occupancy rates are almost back to 2019 numbers, with Northern Virginia finally seeing upticks as corporate and government travel has slowly returned, says Eric Terry, president of the Virginia Restaurant, Lodging & Travel Association: “Hotels have recovered nicely from the pandemic, but labor is still a significant challenge.”

Most hotels are short-staffed, Terry adds, and many have cut back on daily housekeeping services and other amenities. “Some hotels won’t book all of their rooms because of staffing.”

Meanwhile, continuing a growing trend over the past decade, few full-service hotels offering large-scale meeting space are under construction. Instead, smaller select-service properties with limited amenities are sprouting up across Virginia. “It’s hard to make the economics of a full-service hotel make sense,” Terry says.

Other hospitality happenings from around the state include:

Following an extensive, two-year renovation, the Keswick Hotel reopened last fall in eastern Albemarle County. The 1912 property was expanded to 80 guest rooms and suites, with a building added for the new restaurant, Marigold, under the direction of French chef Jean-Georges Vongerichten. A new spa opened this fall.

In the state’s capital, Marriott’s new lifestyle brand, targeted to Gen X and millennial travelers, made its debut this fall in the form of Moxy Richmond, one of Shamin Hotels’ properties. Moxy Hotels are known for offering guests a fun, lively atmosphere for working and socializing. The eight-story hotel at Fifth and Franklin Streets includes 87 rooms featuring folding chairs and tables that can be hung on a peg wall when not in use.

Embassy Suites by Hilton Virginia Beach Oceanfront, the last piece of the Cavalier Resort redevelopment project, is scheduled for completion in early 2023. The 157-suite hotel will be one of only 12 Embassy Suites by Hilton nationwide to receive the brand’s resort designation. Each suite will have panoramic views of the coastline. The hotel will have 10,000 square feet of meeting and event space, accommodating up to 300 people.

Yorktown’s 58-year-old Duke of York Hotel is now the Yorktown Beach Hotel. The property was sold for $3 million in summer 2021, closed for renovations in early 2022
and reopened this spring. Upgrades to the hotel’s 57 guestrooms are scheduled to begin this fall.

A $10 million renovation to the Hilton Alexandria Mark Center was finished in May, including upgrades to meeting spaces and its 428 guest rooms. The hotel offers more than 48,000 square feet of event space with 37 meeting rooms.

Renovations were completed this summer at the Archer Falls Church, located in the Mosaic retail and entertainment district in Fairfax County. The property had been a Hyatt House before Archer took over in December 2021. The 148-room hotel has 3,225 square feet of meeting and event space.

The Hotel AKA Alexandria is scheduled to open this winter in Old Town Alexandria in space previously occupied by a Holiday Inn Express. Billed as luxury long-stay hotels, AKA properties were started by the fourth generation of the Korman family, commercial real estate entrepreneurs over the past century. The 178-room hotel will have six meeting rooms, including a 5,304-square-foot conference room for total event space of 10,500 square feet.

Downtown Roanoke’s first boutique hotel, The Liberty Trust, opened in March in a restored 1910 Greek revival building that previously housed First National Bank. Fairfax-based Savara Hospitality redeveloped the seven-story, 54-room property that features the bank’s original copper doors, as well as a walk-in vault that has been transformed into the Tasting Room bar. The hotel’s mezzanine boardroom has 400 square feet of meeting and event space.

Opened in 1766, the 2,300-acre Omni Homestead Resort in Hot Springs is in the midst of its most significant upgrade in more than a century. The $140 million-plus facelift kicked off last fall with façade improvements. Interior work, including revitalizing the 483 guest rooms, public spaces and restaurants, began this summer.

Plans call for expanding the lobby bar into the Georgian Room, reconfiguring Martha’s Market to maximize efficiency, revamping the 1923-era theater and refreshing each of the 28 meeting rooms, which collectively offer 72,000 square feet of capacity. The resort’s Great Hall also will be updated with custom carpeting and lighting reflecting the Homestead’s bucolic surroundings. Renovations are expected to be finished in 2023.

In addition, the $4 million restoration of the Homestead’s Warm Spring Pools is expected to be complete late this year. (The nation’s oldest spa structures, the warm spring pool’s bathhouses date to
the 1700s.)

Less than one mile from James Madison University, the Hyatt Place Harrisonburg opened in December 2021 with 119 rooms and 1,977 square feet of meeting space. The establishment is the only hotel in Harrisonburg with a rooftop bar.

Nicewonder Farm & Vineyards in Bristol expanded into lodging when it opened the Nicewonder Inn in April. The 28-room luxury boutique inn takes advantage of the venue’s culinary and wine program.

This article has been corrected since publication. 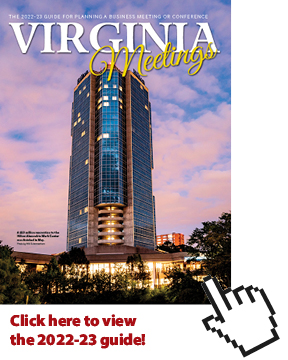 National revenues expected to be 23% below pre-pandemic levels