On a fast track

Christopher Newport has grown and thrived during the past two decades

Editor’s note: This is a part of an ongoing series looking at Virginia’s colleges and universities as economic engines.

When Paul Trible became president of Christopher Newport University in 1996, the university was viewed as a commuter school, with most students driving to and from class each day without lingering on the Newport News campus.

Trible immediately set out to change the school’s direction in a bid to make Christopher Newport one of the nation’s pre-eminent, public, liberal-arts universities. Upgrades were made in academic programs and facilities. Dorm space was increased to encourage a larger residential student population, with the school requiring all freshmen, sophomores and juniors to live on campus. Civic involvement also was encouraged as CNU expanded its reach beyond its 260-acre campus.

“No school has come so far so quickly,” Trible says. “We rejected the notion of incremental progress.” Indeed, 55 years after Christopher Newport College’s beginnings as a two-year branch of the College of William and Mary, the school is making a mark not only on the Peninsula but throughout

Hampton Roads and the commonwealth. In May, the university graduated the largest class — more than 1,200 students — in its history. CNU, as Trible states emphatically, has undergone a “dramatic transformation.”

U.S. News and World Report ranks CNU 17th among regional universities in the South and seventh among public regional universities in the South. In addition, Forbes magazine placed CNU among the top 20 colleges for minorities in STEM fields (science, technology, engineering and mathematics), while the Princeton Review named it one of the country’s best institutions for undergraduate education. CNU is also the nation’s only public institution to receive a perfect “A” from the American Council of Trustees and Alumni based on the strength of the school’s curriculum.

With more than 80 areas of study, CNU focuses on undergraduate education. “We see our role as positioning and preparing students to go off to great graduate programs,” Trible says, adding that the school does offer three, five-year master’s degree programs — in education, environmental sciences, and applied physics and computer sciences. He notes that the overwhelming number of newly minted teachers — who receive bachelor’s and master’s degrees or teaching certification through the program — opt to remain in Hampton Roads.

While remaining dedicated to its liberal-arts emphasis, the university has strengthened its programs in the sciences, with nearly 30 percent of graduates receiving degrees in STEM disciplines. Student demand led CNU to launch a bachelor’s degree in electrical engineering last fall. “Virginia has a shortfall in the number of electrical engineers,” Trible says. “To that end, we saw this as an opportunity to help Virginia meet an important requirement.”

Also last year, CNU began the most ambitious fundraising campaign in its history, seeking to raise $50 million by June 2017. The Defining Significance comprehensive campaign focuses on support for scholarships, faculty and an alumni house. The time is right to undertake such a monumental campaign, Trible says. “We have the students, faculty and a campus that marries Georgian architecture with 21st-century technology,” he adds. “The one thing we need to add is a strong financial foundation.”

The campaign comes on the heels of expansive gifts from plumbing supplier Ferguson Enterprises, which in 2013 pledged $12 million to CNU over the next three decades. The largest gift in the school’s history, the funds will be used to support operation at the Ferguson Center for the Arts, as well as to create scholarships for students in music, theater and dance and to support the university’s Center for Community Engagement. In addition, Smithfield Foods has contributed $10 million during the past decade. The university’s endowment currently stands at about $24.3 million.

Centers for the arts 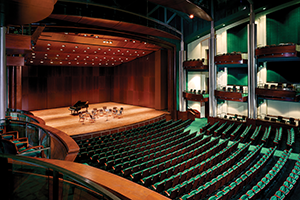 The Ferguson Center is perhaps the most public sign of the university’s transformation. Designed by renowned architect I.M. Pei, the $70 million facility features a 1,700-seat concert hall and a 500-seat theater. Since opening in 2005, the center has hosted more than 2 million patrons, with more than 70 performances each season, including Broadway plays, symphonies and ballets. “It’s world-class in every respect,” Trible says. “There is nothing like it in Virginia.”

He adds that until the Ferguson Center opened, the Peninsula was the only community of its size in the country without a regional performing arts center. By all accounts the facility has paid off, with patrons spending more than $97 million during the past decade and 3,100 jobs being created. In addition, more than 23,500 performers and support crew have spent $3.8 million for more than 32,000 hotel nights on the Peninsula and $1.2 million on meals.

CNU also plans to build a new visual arts center, following its recent merger with the Peninsula Fine Arts Center, as well as an addition to the university library. The General Assembly has approved the design phase for both capital projects.

Community service
Beyond campus facilities, the university is focusing on producing leaders and citizens who can impact Hampton Roads and beyond. Students are encouraged and expected to perform community service. “Service is important,” Trible says. “We are all about leadership, honor and civic engagement.”

Students often parlay their coursework into avenues for assisting local businesses and other agencies. For example, students enrolled in the university’s four-year Bonner Service Scholars program serve 1,200 hours on local site-based teams working on a range of issues, including poverty, homelessness, immigration and projects to reduce high-school dropout rates. “We are not turning a blind eye to the challenges people face,” says Brad Brewer, who directs the Bonner Service Scholars. “We’re training our students to become lifelong active citizens and engage people very different from themselves and listen to different perspectives. While they’re doing that, they are having an enormous impact on the people they serve.”

Brewer also heads CNU’s Center for Community Engagement, which annually funds up to 30 Ferguson Fellowships for Social Entrepreneurs. Working with faculty members, students receive a $1,000 stipend to research a community need, design a plan to address the problem in a new way and implement the plan. Brewer estimates that 148,000 hours of CNU volunteer work has a value of about $3.4 million in the community. “In the long run, it’s a question of whether our community will be known as a healthy, vibrant community with youth and energy and a long-term economic impact,” he says.

Assisting small companies
Strengthening the region’s economy is the focus of CNU’s Small Business Institute, which has provided free assistance to small companies in Hampton Roads for more than two decades. Senior business students spend a semester developing business and marketing plans, conducting market research studies, performing accounting, operational and business systems analysis, and guiding firms through the social-media maze. “The traditional business school curriculum tends to focus on large public corporations, but 84 percent of the world’s businesses are small or entrepreneurial,” says William Donaldson, the institute’s director. “This program gives our students exposure to the real world for life after academia, and is our way of giving back to the community.” 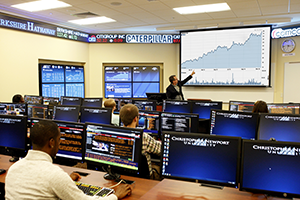 Forty-five to 60 students enrolled in a class on small and family business and entrepreneurship work with five or six companies each semester. Recent projects have included conducting a food optimization and plate cost study for a local restaurant and completing an inventory analysis for a NASA researcher who developed a test to detect cancer. A faculty member oversees each team, but the students are essentially in charge. “It’s really their show,” Donaldson says. “They’re the professional consultants who decide what hours they work.” Donaldson doesn’t attach a dollar value to the students’ efforts, but he believes firms have benefitted. “We have good anecdotal evidence. Clients rave about the experience they’ve had.”

Such praise reinforces the mission of CNU’s Luter School of Business, which has purposefully remained an undergraduate program, accepting about 130 students annually. Earlier this year, the school was reaccredited by the Association to Advance Collegiate Schools of Business International in an especially strenuous process for schools offering only undergraduate business degrees. “Only four percent of business schools are strictly for undergraduates,” says Pamela Pringle, the school’s assistant director. “We are very student-focused, with small classes and lots of hand-on team projects.”

Accounting students gain hands-on experience through a voluntary income tax assistance program in which they help more than 200 low- and moderate-income taxpayers prepare their returns. This year, 20 students volunteered more than 600 hours under the supervision of an accounting faculty member to prepare and file returns.

While Christopher Newport strives to be among the top American universities, its mission remains centered in Virginia. “We believe our job is to educate the sons and daughters of Virginia first and foremost,” Trible says, noting that 90 percent of the university’s students are from the Old Dominion.
But no matter where they go upon leaving CNU, Trible says, students will spread the university’s name and reputation. “The key to our success is students come here and fall in love with this place and share that passion with their friends, neighbors and parents,” he says.