Old and new mix in Alexandria

Alexandria is a patchwork quilt of a city, with the distinctive fabric of each of its neighborhoods central to the planning of commercial and residential development.

Old Town, with its many blocks of handsome historic architecture, can be likened to fragile old velvet that needs to be sensitively handled and preserved to maintain its beauty, while funky Del Ray is more like well-worn denim — informal, comfortable, low key.

Potomac Yard is the equivalent of one of those new-age materials that are all about convenience and practicality. Yet tough times along the Interstate 395 corridor have left its no-nonsense fabric quite frayed.

Alexandria counts 18 such neighborhoods. “We divide the city into small areas and do comprehensive plans for each,” says Stephanie Landrum, president and CEO of the Alexandria Economic Development Partnership.

Old Town is perhaps the site of the city’s most ambitious agenda. The area always has been a steady performer, and in the second quarter of this year it had one of the lowest commercial vacancy rates in the Washington metropolitan  market — 14.5 percent for Class A space, according to CoStar, a commercial real estate data company. The average rate for the region was 16.4 percent.

“Old Town doesn’t have pendulum swings,” says Eric Berlin, senior director of investor services for Cushman & Wakefield. One stabilizer has been the presence of many nonprofits and associations, which are suited to its inventory of generally smaller buildings.

Old Town, however, never has made optimal use of its prime location on the Potomac River, although the potential is clear. On a recent steamy afternoon, for example, the attractive dock area at the foot of King Street was swarming with people browsing the gift shop at the Torpedo Factory art center, lining up for tickets for the ferry that runs to Mount Vernon, Washington, D.C., and National Harbor in Maryland, and lunching at the newest trend spot, the Blackwall Hitch. The sidewalks were packed, and parking was impossible.

Yet a few blocks away in either direction along the river, almost no one was around. That’s because two former industrial sites cut off all access to the water. The Robinson Terminals, North and South, where paper once was offloaded for presses of The Washington Post, bookend the Old Town waterfront, and both have been empty for years. They are enclosed by chain-link fences plastered with unfriendly warnings to keep out.

This lack of access will soon change. Robinson South will be the site of a project that will include town houses, condos, restaurants and limited retail. Construction should begin this fall with an opening projected for late 2017. Adjacent to that development, a 5-story, 110-room Hotel Indigo is expected to open the same year.

Robinson North will become a second mixed-use development. It will include a hotel with about 100 rooms, Landrum says. Construction should begin next year with the project expected to open in 2017. “Old Town has long been regarded as a tourist destination, even though plenty of people live there, too,” notes Webb.

The city is investing its own money in the riverfront upgrade by doing extensive flood mitigation work to be followed by a new park with a centerpiece fountain and a 1.5-mile river walk.  A revamped, much more aesthetic and accessible riverfront should help Alexandria increase the already satisfying stream of day visitors who ferry across the Potomac from National Harbor, a massive mixed-use project on the Maryland shoreline. When the MGM Casino opens at the complex next year, that tourist flow is expected to become even heavier.

Another area, about a block off the river close to the Braddock Metro and within walking distance of Old Town amenities, is an object of special attention from the city as well. Alexandria has crafted a new development plan for Old Town North with the aim of finding a better balance between commercial and residential uses. Landrum says the 2015 “small-area” plan for the neighborhood includes mostly in-fill development, such as hotels and mixed-use projects.

Until just recently, Old Town North residents were underserved, Webb says. However, eateries such as Mason Social, Bastille, the Lost Dog Café, and doughnut purveyor the Sugar Shack have arrived in the past couple of years. A Harris Teeter supermarket opened there in 2014, joining new high-end town houses and apartments.

A luxury condo building called the Oronoco, which opened last year, was built from the foundations of the former home of the Sheet Metal Workers International Association. Rusting railroad tracks leading to the derelict Robinson North terminal still run through the park in front of it. 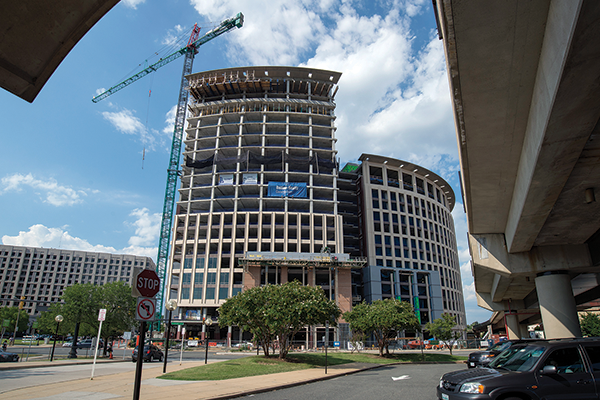 On the other side of Old Town in Carlyle, Alexandria looks forward to the 2017 arrival of about 2,100 employees of the National Science Foundation. They will occupy a 660,000-square-foot, LEED-certified building across from the Eisenhower Metro. Mixed-use development should follow. “It won’t have huge coattails,” Berlin predicts, “but there will be some.”
Last month, the city learned that another major federal agency, the Transportation Security Administration, also is relocating its headquarters to Alexandria. The TSA is going to the Victory Center Building in 2018, a move that will bring 3,400 employees.

Away from the river in down-home Del Ray, lots of growth is not really the goal. Instead, Alexandria is focusing on a “pattern book,” which offers owners, architects and builders nonbinding guidance for making alterations and additions to historic buildings.

Potomac Yard
Just a few blocks from quiet Del Ray, yet a world apart, is the booming Potomac Yard, where hundreds of units of new housing are going up. “Certainly, a lot is going on residentially everywhere,” Berlin says, but Potomac Yard is “huge.”

The station’s tax revenues are expected to generate more than $1.5 billion over 30 years for the city. The project will be funded with $69 million from the Northern Virginia Transportation Authority, a $50 million Virginia Transportation Infrastructure Bank loan and a $143 million general obligation bond. The debt will be paid by a contribution of up to $72 million from a developer and revenue from two special tax districts around the station.

One commercial tenant that will be moving in is the Institute for Defense Analysis. That is good-news/bad-news for Alexandria, because the institute is now located at the Mark Center on the city’s struggling Interstate 395 corridor, where the commercial vacancy rate in the first quarter of this year reached  24.3 percent. Another Mark Center tenant, the American Diabetes Association, also is decamping for a location in Crystal City in Arlington with the access to Metro that the Mark Center lacks.

“The traffic scared people away,” Berlin says. “The 395 corridor’s future as an office market is questionable.”

The downturn in that part of Alexandria is partly the fault of the recession, of course, but also of changing attitudes. More and more, people want to live and work in areas that are diverse and that have access to public transportation, such as Old Town or Potomac Yard.  Alexandria’s best and most promising neighborhoods may be a patchwork, but Metro provides the stitching that holds their future together.

Barcroft Plaza in Falls Church is getting a $3.2 million renovation