Home News Office of the future

Office of the future

Fewer walls, more windows. Work stations that can adjust for sitting down or standing up. More bars for employees, as in coffee bars, yogurt bars, trail mix bars. And don’t forget free address — the ability to plug in and work wherever you want in an office.

These are some of the trends in the workplace of the future. Some already are in place in offices across Virginia as companies move to replace drab cubicles with colorful spaces designed to foster teamwork and collaboration.

According to interior designers, technology and flexible environments are key drivers in office design.  “Traditionally, the thinking was, ‘How many people can we cram into a space?’” says Robert DeLille, CEO of Creative in Ashland. That’s because a company expected the space to stay the same for 10 years or so.

Today, the thinking has migrated to: “How can we make it flexible?” As the needs of a company evolve, so can the space, meaning companies can stay put longer.  “Today we outfit a space with a variety of settings so people can work in collaborative space, private space, team space,” says DeLille.

Here’s another reason spaces must have multiple uses: There’s not as much of it. CoreNet Global, a commercial real estate association, reports that the average amount of space per office worker in North America dropped to 176 square feet in 2012, down from 225 square feet in 2010. 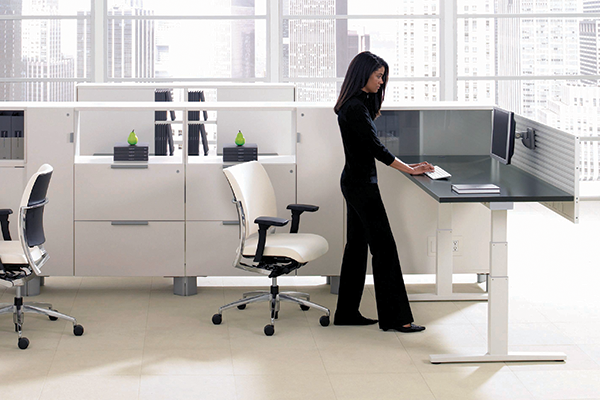 Just because the space is smaller, though, doesn’t mean workers want to spend their days sitting at a desk.  With a growing emphasis on wellness, sit-to-stand tables are becoming popular. These adjustable-height, mobile workstations, which retail for about $1,500 each, allow workers to set the table to various heights. “You can stand, sit, have whatever posture you want instead of being forced to sit in a chair all day,” says DeLille.

The tables might be placed in long rows alongside each other, in a “benching” configuration, just one of many new terms in today’s lexicon of office décor.   At CustomInk in Fairfax, an online company that sells custom T-shirts, the first thing employees see when they enter from a parking garage is a “wordle.” That’s a wall of words, which in this case are ones used frequently in CustomInk’s conversations with customers.

White boards for sharing ideas also are prevalent, as are “Zen” rooms — private employee spaces — and “touch-down” rooms, where workers can hold a quick, informal meeting as they move through a space as opposed to reserving a conference room.

Branding also is big. Companies want to incorporate their mission and corporate culture in office design.  They want spaces that are light, bright and fun but that also convey a sense of identity, like the “wordle” at CustomInk.

At Allianz Global Assistance in Henrico County, a media wall in the lobby shows places around the world where customers are traveling. That’s a nice touch for the company’s travel insurance product, and, “it helps set the international feel of the company,” says Randy Blankenship, a principal for Evolve Architecture in Richmond.

Employers say a modern, collaborative space helps in recruiting new workers and retaining old ones. Jesse Waltz, owner of JES Foundation Repair and KBH Business Management Systems in Virginia Beach, invested $5 million in a new building for his employees. Situated on a 12-acre site with a lake and scenic trails, the building has an open floor plan with modern finishes and furniture. Amenities include a cafeteria with pizza ovens and microwaves for employee use and a fitness center.

“When people come in for an interview, we are proud of where we work,” says Kimberly McDonald, chief operating officer for KBH, a construction software company. “You see people here all weekend. They come to work out … People will bring their kids to walk around, go fishing on the lake and maybe they might be up here getting a few things done, so it’s helped our productivity.”

Amenities are a big part of modern workplaces. “The office of the future pays attention to the employee needs, where the employee is not just a number but a contributor to the success of the company,” says Greg Waters, director of corporate services, USA, for Allianz. As a result of employee feedback, Waters says, he added stability balls to the office and the use of credit cards at vending machines.

Even with a small group of people, it isn’t easy finding a design that works for everyone. Andrew Cohill, president of WideOpen Networks in Blacksburg, says his five employees worked in an open, bullpen-type environment for five years before he returned to a more closed design.

Cohill’s company designs and builds broadband networks primarily for local governments. The work requires a lot of videoconferencing, and clients frequently are on speaker, so everyone in the office could hear both sides of the conversation.  “I used to get a lot of complaints. The office is noisy. I don’t have any privacy. I can’t concentrate.”

Another drawback?  “Sometimes as the boss, I needed to talk about personnel matters. It’s one thing to be sitting out in the open and to be accessible to your employees, but every time you had a call that needed some privacy, I had to go down the hall and find a conference room, and that was inconvenient.”

A year ago, he reconfigured the office and each employee now has a private office. “Everyone is much happier,” says Cohill.

To his way of thinking, the real revolution in office design is occurring on the desktop. Cohill’s company makes use of multiple monitors to increase efficiency. It also uses an HD webcam, so employees can run Skype all day, communicating with clients via video. WideOpen also has installed a Fujitsu ScanSnap on most desks. They convert paper documents to a PDF, reducing the use of paper.

As the office environment continues to evolve, this much seems clear: one size doesn’t fit all. Companies must learn what works best for their employees and what showcases their mission.

To demonstrate modern trends, Virginia Business selected three offices to showcase from about 20 submissions from around the state. See below for a photo gallery of submissions.