Home News Off the beaten path

Off the beaten path

Each year, Cindy Joyce spices up her company’s annual fall retreat with a unique team-building activity — roaming the region on scavenger hunts, cooking collective meals, painting landscapes on canvas side-by-side or challenging employees to find their way out of an elaborate trap.

“It started as an icebreaker,” says Joyce, chief operating officer of Richmond-based financial services firm Agili. “We have two locations [in Richmond and Bethlehem, Pennsylvania,] so it’s the one time of year when we are all physically together.”

Agili’s very first outing in 2011 saw its 24 employees decipher clues in order to make their way out of three tricked-out, themed spaces at Escape Room RVA, which has also hosted teams from Altria, Capital One, Genworth, Dominion Energy and Wells Fargo, among others.

“You get to know people a little differently here than in other team-building activities,” says Kelly Powers, the general manager of Escape Room RVA. Its parent company, Ravenchase Adventures, also has escape rooms in Herndon and Arlington. “They learn to use their thought processes in a different way to solve problems.”

Team-building has long been common in the workplace, whether it involves charity work, hosting happy hour meetups or holding leadership seminars.

While those activities are still popular, companies both large and small have become more imaginative and expansive in their approaches, centering their efforts on visceral thrills, relaxation or just plain fun. 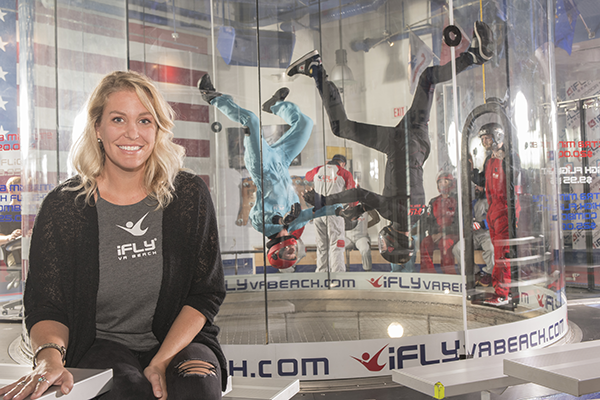 “I think it’s a generational shift,” says Misty Curtis, the sales manager of iFLY in Virginia Beach, which gives guests a chance to simulate the freefall portion of skydiving. “Back in the day, you came to work and stayed at work and went home. Now, people want to engage with their community outside of social media and be more adventurous. It’s all about escaping the boardroom.”

One of two iFLYs in Virginia (the second is in Arlington), the Virginia Beach location averages three to five corporate groups a month, hosting companies such as Constellation Brands Inc., Mythics Inc. and Stihl Inc.  “The excitement of flying encourages bonding in ways that few experiences can,” Curtis says.

“I think the goal is to foster greater relationships at work,” says Mario Zelaya, founder and CEO of Ontario-based Bad Axe Throwing, where customers learn to accurately toss sharp axes and compete in tournaments. “I think exposing people to fun is the best way to team build. You may not realize that the person in accounting or HR is awesome and has different sides to them. Getting everyone out of their comfort zone will help do that.”

With 40 locations across the globe, including a new facility in Fairfax and another due to open in Richmond this winter, Bad Axe has hosted teams from SoFi, Husch Blackwell and Cloudera Inc. at its Washington, D.C., location. “You get that craps table-type feeling with people cheering, rooting for that person on their team. There’s excitement in the air,” Zelaya says.

Feats of clay
Some companies prefer quieter diversions. “We did etiquette school one year,” says Joyce at Agili, formerly known as JoycePayne Partners. “We had an etiquette company come in and teach us how to act at a cocktail party and a dinner. I was taught etiquette in my sorority, but not everybody comes out of school and knows which fork to use. I wasn’t sure how it would be received, but everyone loved the experience.”

Herndon-based government contractor Perspecta was formed a year ago from the merger of DXC Technology, Vencore Holding Corp. and KeyPoint Government Solutions. Post-merger, Perspecta’s competitive intelligence division team badly needed to bond, since many had never met face-to-face — so its members made pottery together.

“When the idea was first brought up, I wasn’t sure how others would react,” says Perspecta Senior Director Chad Ehrmantraut. “But it was a chance to step out of our normal box and try something different.”

The 15-member Perspecta team was visited by Lori Langford of Big Dog Pots Pottery. She oversees four to eight corporate groups per month, either on-site at a client’s workplace or in her Fauquier County studio. “We can do fused glass, wheel throwing, pottery painting,” Langford says. “It’s relaxing.

Nobody’s on their phone, nobody’s checking their email.”

“Good companies should embrace these opportunities,” Ehrmantraut says. “Especially those that have a heavy concentration of people that work from home.  While telecommunicating helps employees to strike a better work/life balance, it can be hard to forge strong team bonds in a virtual environment.  This event was an outstanding way to develop stronger working relationships and lasting friendships.  And it was a lot of fun!”

Fairfax County-based Carfax, which supplies vehicle history reports to individuals and businesses, has been named to Virginia Business’ annual Best Places to Work in Virginia every year since 2011. Everyday perks for its 960 employees include gaming stations and regular office parties — the annual Halloween party is particularly popular — but special outings also help to solidify bonds at Carfax.

“In the spring, the entire company gets together and does a team-building exercise. Then, throughout the year, different departments will have their own activities,” says Tracy Steinbach, employee experience specialist in Carfax’s human resources division. “We’ve done it all: escape rooms, pottery, Topgolf.

… We’ve gone to Evergreen Sportsplex [in Leesburg] for the day and had three fields of 20 teams competing against each other [in various sports]. We’ve done just about everything … except ax-throwing.”

“You’re building a lasting foundation,” adds Debbie Brennan, Carfax’s meetings and events manager. “It’s friendship. I mean, this is your work family. And if you have solid and happy relationships with those you work with, you won’t mind coming into the office. That’s why we use team-building — to keep our culture sound and stable.”

Looking back at a decade of offbeat team activities, Agili’s Joyce says, “The first year I was not organized, so I didn’t reveal what we were doing … [but] now there’s anticipation built in, and it’s become an annual thing where people try and guess what we’re going to do.”

That’s why she won’t say what she has in store for Agili employees at this year’s upcoming retreat. “It’s a secret,” she says, laughing. “I don’t want to ruin the fun.”