It’s not uncommon to hear dozens of languages spoken on Old Dominion University’s campus in Norfolk.

With 24,375 students from all 50 states and more than 100 countries, ODU has become a regional melting pot of academic and cultural diversity. Nearly 90 years after its founding in 1930 as the Norfolk division of the College of William and Mary, ODU has evolved from a two-year commuter school into a major doctoral research institution offering more than 270 academic programs.

“As many as 50 languages are spoken on campus,” says ODU President John R. Broderick, the university’s leader since 2008. “I hear all the time from students who say that one of the critical deciding points for coming to ODU was they wanted to come to a diverse campus that is committed to welcoming all. That has always been a genuine edge for us.”

The university’s commitment to nurturing an inclusive environment sets it apart from other schools, Broderick adds. “It’s a very diverse place, but what makes it special is the inclusivity you see on campus, in the library, in the dining hall and as students walk around,” he says. “We talk about students having to compete in the world, but they also will have to partner with others. How can you partner in the world if you have never been around people from all kinds of points of view?”

Encouraging diversity and inclusivity is an ongoing objective at ODU. “We have to commit to efforts to always take a look at how we can make the campus more welcoming to students, staff and faculty,” Broderick says. “We have to realize that not everybody here is between the ages of 18 and 22, and not everybody here has even been in this country before visiting campus for the first time. There are always opportunities to do some things better.”

Broderick and his wife, Kate, have been driving forces behind making ODU a more welcoming community. In recognition of their efforts, student leaders asked to name the university’s dining hall Broderick Commons in their honor. The facility, which features a variety of cuisines, opened in 2016.

Kate Broderick, formerly Old Dominion’s director of educational accessibility, joined forces with Pam Kirk, an ODU alumna and member of the board of visitors, to found the university’s Women Initiative Network (WIN) in 2014. The mentorship program pairs women executives with first-generation female students. Mentors regularly meet with students to discuss concerns ranging from preparing for job interviews to managing finances. The network also funds an annual scholarship for a female student with financial needs.  This year, 20 mentors are counseling 23 students. Meeting for lunch, a cup of coffee or dinner, they discuss everything from preparing for job interviews to managing finances.

Kirk says that students who have graduated continue to check in with their mentors for advice and encouragement as they navigate their careers.
“The unique thing about this program is it’s very individualized to each student,” Kirk says. “Students can ask professionals all kinds of questions about anything they need to chart their career path.”

$250 million campaign
One of ODU’s longtime priorities has been supporting students who need extra encouragement to complete their education. More than 33 percent of the university’s students are eligible for Pell grants, and about 70 percent receive some form of financial aid. Broderick notes that the typical ODU student comes up short by $1,700 in paying college expenses.

“We have students who make a choice between books and a week’s worth of food,” he says. “Those are the kind of decisions we don’t think our students should have to make. We want to continue to attract the best and brightest and make sure they have the same opportunities to succeed that they would have at any other institution in the commonwealth.”

Providing support for student scholarships and academic opportunities such as study abroad programs is a primary objective of the university’s $250 million fundraising campaign, which Broderick announced during his State of the University address in August. At least $100 million will be earmarked for scholarships.

“We have been fortunate in the last five to seven years to have made great inroads in philanthropy,” Broderick says. “The time is certainly right for us to do this. It’s another step in our maturation as an institution to go out and do something at this level.”

The campaign’s original goal was set at $200 million, but university officials upped the ante after raising $78 million by December. Previously, the university’s most successful fund-raising campaign, from 2001 to 2006, netted $115 million.

“This is an open-ended campaign, but we want to get it done in five years or less if we can,” says Alonzo Brandon, ODU’s vice president for university advancement. “This whole thing is about giving students opportunities to excel and graduate with less debt and opportunities to fulfill their dreams.”

Money raised through the campaign also will support special projects such as ODU’s research in resiliency. Through its Commonwealth Center for Recurrent Flooding Resilience, the university has become one of the nation’s leading research institutions in sea-level rise.

“Most of the research has been done with state funds,” Brandon notes, “but what we really want to do is take it nationally and raise money to establish an institute … to cover things outside Virginia.” 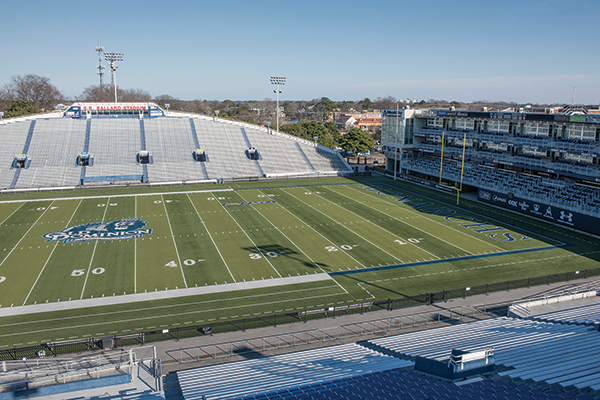 ODU’s athletics program also will benefit from the campaign. The Old Dominion Athletic Foundation is raising $40 million, including $20 million for athletic scholarships and $20 million toward the $55 million renovation of the school’s football stadium, Foreman Field at S.B. Ballard Stadium.

The university revived its football program in 2009, nearly 70 years after dropping it. Bringing football back to ODU and Foreman Field, which opened in 1936, has benefited the university and Hampton Roads. “Football has been a rallying point for the region and certainly for the campus,” Broderick says, noting that 20,000 people converge on campus for home games six Saturdays each fall. “Football brings people to campus who may not have seen the successful transformation we’ve had here.”

Football also has brought to ODU students who previously might have gone elsewhere. “Football led us to start a marching band [with 165 students],” Broderick notes. “A lot of those students are here because of the ability to participate in a band. We used to lose a lot of students to other schools because we didn’t have a band.” 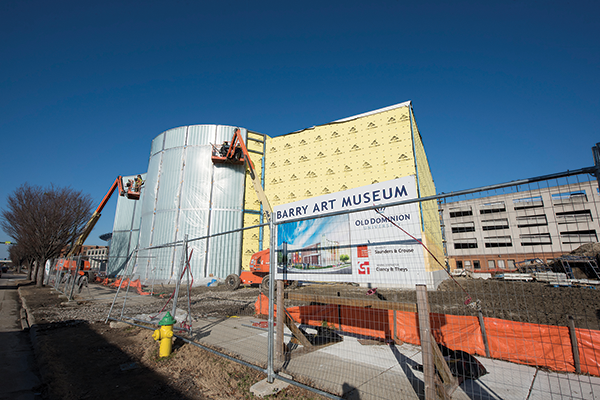 A growing number of students also are taking advantage of ODU’s burgeoning arts programs showcased in a variety of galleries, theaters and museums on campus. ODU’s role in the region’s arts scene has expanded over the years and will be further magnified with this fall’s opening of the Barry Art Museum. The 24,000-square-foot museum now under construction on Hampton Boulevard is the result of a donation by Hampton Roads philanthropists Richard and Carolyn Barry. The gift is valued over time at more than $35 million, the largest gift in the school’s history.

Focusing on the American glass art movement, the museum is being heralded as a significant player in Hampton Roads’ fine-arts scene. It will feature items from the Barrys’ personal collection, including glass sculptures and paintings. The collection also includes automatons, 19th-century dolls wound by a clockwork mechanism to perform movements. The museum will be free and open to the public.

“This is going to be a very active place,” says Jutta-Annette Page, the museum’s executive director, who came to ODU last year after serving as senior curator of glass and decorative arts at the Toledo Museum of Art. “It’s a very exciting prospect to be involved on the ground floor of a new museum. It’s a rare opportunity to start out a museum from scratch.”

Page is enthusiastic about the opportunities for the museum to partner with ODU academic programs, including areas such as engineering and science. “There are so many different tie-ins that we can create through the collections,” she says. “The more we can involve other departments, the richer the cultural life of ODU will be. This will be a laboratory of ideas for the future.”

Already, the museum has collaborated with ODU’s Virginia Modeling, Analysis & Simulation Center to develop visualization slides using automatons. “We see a lot more tie-ins with robotics,” Page adds. “We think it will be one of the highlights of the museum’s collection.”

The interaction between the arts and other disciplines is just one of the opportunities ODU plans to take advantage of. “I feel very good about the steps forward we’ve taken,” Broderick says of his decade-long tenure as president. “We’ve remained true to our mission and have become not only a leader in Hampton Roads but in the commonwealth.”

Old Dominion University at a glance