I haven’t seen them myself, but I’ve heard reports of bumper stickers around town reading “Bill Bolling for Lt. Governor,” with the “Lt.” crossed out and 2013 written over “2009.”  Bolling seems like a new man lately, a bit trimmer and no longer beholden to the McDonnell apparatus that so sadly failed him.

While write-in votes for Bolling likely will be numerous in November’s election, the full-court press of an independent campaign seems unlikely.  Only Virginia and New Jersey have gubernatorial elections in 2013, and Gov. Chris Christie leads by such a wide margin in New Jersey that nearly all national political donations are flowing toward the Old Dominion. 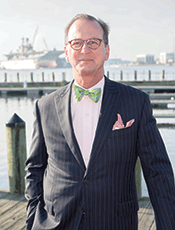 This outside money, well beyond the means of any independent candidate, is grossly inflated by PACs, parties and the fundraising wiles of professional pols. I wish I could call it smart money, but the 2013 governor’s race in Virginia is looking just about anything but smart at the moment.

I mean, hell’s bells! We’re talking hundreds of thousands of gob-smacking dollars being spent on things like Citizens United’s swift-boat launch of a full-length mockumentary called “Fast Terry.”  I’m sure that the fair and balanced crowd’s paranoid imaginings see this as essential to offset liberal media bias, but they are really only preaching to their own choir.

Out-of-state money is doing a lot more than just driving up the cost of television ad time in Virginia. It also is straining the credibility of political campaigns in ways far worse than previously imagined.  A phrase comes to mind about throwing good money after bad.  We’re seeing a lot of that.

Beyond spending and credibility, the substance of both campaigns has sunk to ridiculous new lows.  Incessant charges and counter-charges ringing Pee-Wee Herman-like “I know you are, but what am I?”  A circular firing squad (providing full employment for fact-checkers) is desperately trying to deflect focus. Finger pointing, and attempts to define opponents with negative ads likely will render anyone still undecided politically tone deaf for the duration.

And it’s not just the case for the top job.  Amid so much controversy that they can’t even support their own ticket mates, Virginia’s tea party-hijacked Republicans really do have their dream team for this year’s election. Republican gubernatorial candidate Ken Cuccinelli, known for standing his ground, is a mere piker compared with E.W. Jackson, the candidate for lieutenant governor, in willingness to call a spade a spade.  If an example is ever needed of the likely result of Harvard affirmative action biting the hand that feeds it, Bishop Jackson may be it.

Things aren’t much better on the Democratic side.  Terry McAuliffe is at least somewhat deserving of his carpetbagger status. He may have lived in Fairfax County for more than 20 years, more than many Northern Virginians (or even many folks in Hampton Roads for that matter), but his sensibilities have always been more inside the Beltway than downstate.

From the outside looking in, there’s a distinct lack of ambition among more established Virginia Dems.  Losses in the past couple of state election cycles have thinned their ranks to the point where hanging on to their current seats is difficult enough.

Despite having lost in the statewide Democratic primary four years ago, McAuliffe ought to be given credit for having the ambition to saddle back up for another run.  But then again, he’s reported to have considered running for governor in both Florida and New York.  Still, it’s hard to fault a candidate for being ambitious.

Further down the ballot, Democratic attorney general candidate Mark Herring, from Leesburg, may not have the same name recognition downstate as Republican Mark Obenshain. Obenshain’s, well-remembered father, Richard, chaired the Republican Party of Virginia before his untimely death in a plane crash while campaigning for U.S. Senate in 1978.

On the other hand, Herring should do well in his home territory of Northern Virginia.  Judging from most recent elections, it can be argued that as goes Fairfax, so goes the commonwealth.

That leaves the race for lieutenant governor.  Democrat Ralph Northam is running against Jackson.  Both hail from Hampton Roads, so there is no particular geographic advantage. Jackson’s controversial rhetoric has raised his profile across the state, but not in an entirely positive fashion.  Northam, on the other hand, may have a harder time getting name recognition among voters more focused on the top of the ticket.

Meanwhile on the national front, our Dee Cee politicians are likely to deadlock over debt limits, resulting in a federal government shutdown by the end of this month.  If sequestration has been bad for Virginia, this can only be worse.

Not long ago Virginia’s Democrats seemed to be praying toward Washington, hoping Sen. Mark Warner might make a return run for the governorship.  Now, Republicans are beckoning Bill Bolling to be their savior. Meanwhile, Virginia’s Executive Mansion chef-gate case goes to trial in October.  Sounds like a perfect storm is hitting just before November’s election.

Predictable results – the incumbents, of course!

From ‘Mad Men’ to #MeToo