Northern Virginia’s commercial real estate market still is overcoming the outsized effects of sequestration, but the pace of expansion this year picked up in some areas.  And as the region heads into 2016, things are looking more positive, thanks to a recent deal on the country’s budget.

Congress agreed to a spending plan in October that one real estate analyst describes as “a sigh of relief and a step in the right direction.”

Scott Homa, senior vice president of Mid-Atlantic Research for JLL, says the two-year federal budget that removes more than $80 billion in sequestration cuts is an encouraging sign to NoVa tenants and government contractors who have faced an uncertain environment since budget austerity began in 2010. “Having some meaningful increase in the budget is a good thing for those groups, and the downstream effect it would have on the office market is a positive,” says Homa.

As of the third quarter, JLL reported that NoVa had 319,221 square feet of absorption (the net change in occupied space over a given time). Homa expects that trend will make 2015 the strongest year since 2010. “We’re starting to see gains across more diversified sectors of the tenant base, outside of government contracting,” he says.  McLean-based Capital One Financial Corp. continues to expand along with technology firms and shared workplace providers.

However, recovery in the region remains not only sluggish but also spotty. In some areas, new office buildings, retail outlets and housing options are in the pipeline. In others, construction is next to moribund.

The magic pill? Metro accessibility. When markets have access to Metro stations, especially those with mixed-use amenities, vacancy rates are dramatically lower, in most cases, than in markets where Metro is not an option.

For instance, market reports from several real estate companies were showing overall office vacancy rates for Northern Virginia, in ranges from 14.8 to 20 percent in the third quarter. Yet in certain pockets, such as the Eisenhower Avenue section of Alexandria in the I-395 corridor, CoStar Group Inc. reported a vacancy rate of 4.3 percent for top-tier, Class A office space.

The National Science Foundation has signed a lease to take 700,000 square feet of space on Eisenhower Avenue in 2017. Another large federal lease on Eisenhower Avenue, 625,000 square feet for the Transportation Security Administration at Victory Center I near the Van Dorn Metro stop, was voided by a federal court last month in response to a lawsuit filed by Boston Properties, which had filed a bid for the lease at another competing site. In the suit, Boston Properties raised challenges about environmental issues at Victory and the General Service Administration’s selection process.

The Eisenhower section is one of five subsectors of the Alexandria/I-395 corridor, with vacancy higher in some of the other sectors. Yet, it makes the point about Metro.

In lockstep with this demand for Metro access is a shift in what commercial tenants find desirable. “Walkability, urban environment, you pick your buzzword,” says David Gast, executive vice president of Colliers International.  In the past five years, some office parks have fallen out of favor, replaced by a call for commercial space mixed with housing, retail and entertainment options within a single setting.

Tysons goes more residential
Tysons is a prime example. Even though CoStar reported that Tysons had an overall vacancy rate of 19.5 percent in the third quarter, large-scale builds, nevertheless, are going up in areas close to the new Silver line Metro stations. 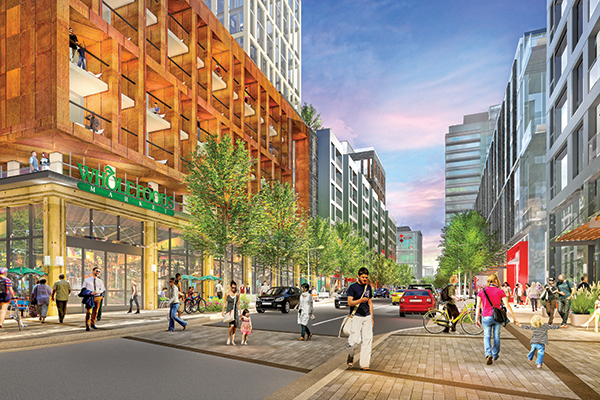 One of the biggest is the Boro, located about a quarter of a mile next from the Greensboro station.  The first phase of this joint undertaking of the Meridian Group and Kettler should break ground next summer. It will encompass 626 apartments, 124 condos, 223,000 square feet of retail and 400,000 square feet of office space. Those 1.4 million square feet will feature a 70,000-square-foot Whole Foods store, slated to open in 2018, and a 15-screen movie theater. Eventually, the complex is expected to expand to 3.7 million square feet spread across 18 acres. “The Boro is creating that sense of place that people want,” Gast says.

Michael Caplin, president of the Tysons Partnership, whose members include Fairfax County representatives, landowners, businesses and residents of Tysons, says the Boro will be self-contained, and he points to other Metro-centric projects at Tysons pursing the same integrated agenda.

The Macerich Co., for example, has approval to add several more residential and office buildings at its 60-acre Tysons Tower site. It already has a Hyatt Regency hotel, a residential tower, retail outlets and a pedestrian plaza. Lerner Enterprises, which should deliver the 476,913-square-foot Corporate Office Centre at Tysons II by early next year, also plans to erect two new residential towers on the same 50-acre plot across from the Galleria shopping mall.

Tysons may not have been envisioned as a traditional city, Caplin says, but with 500 to 1,000 residential units anticipated to come on line there annually in the foreseeable future, what was once a 2,000-acre office park could become a network of urban villages.

More of an urban mix for Rosslyn
Inside the Beltway, the most ambitious venture is linked to Metro as well: JBG’s Central Place near the Rosslyn station in Arlington County. JBG should open a half-million-square-foot office building there in 2017, followed by a residential tower with 377 residences in 2018. The enterprise includes 45,000 square feet of retail space and a 17,000-square-foot public plaza, envisioned as a venue for community events.

Rosslyn has had a reputation as a sterile office canyon, similar to Crystal City, yet this expansion represents a crucial move toward an “urban mix,” says Mary-Claire Burick, president of the local business improvement district.
Elsewhere in Arlington, Christina Winn, director of business investment for the county’s economic development office, says the $200 million to $300 million redo of the Ballston Mall will enliven its neighborhood, too, as the shopping center is “turned inside out” to make it more street friendly. A 27-story residential building linking the Kettler Capitals Iceplex and the mall should further merge the neighborhood’s residential, retail and entertainment elements. All this is taking place near the Ballston Metro stop.

Back outside the Beltway, the biggest news after Tysons comes from Loudoun County.  Buddy Rizer, executive director for Loudoun economic development, says the county collected $1.3 billion in commercial real estate taxes in fiscal 2015, a 459 percent increase over the previous year. Much of that good fortune comes from the expansion of data centers, and that growth looks to continue. In October, Northern Virginia became the No. 1 data center market in the country for 2015, moving ahead of the New Jersey/New York region, with nearly 20 percent of the market share, according to JLL.

That same month, Equinix broke ground on a $2 billion data and technology campus near the Loudoun County Parkway. Before year’s end, Rizer promises the announcement of another unnamed tech campus in the $2 billion range.

In a build-out expected to take 25 to 30 years, Waterside eventually should offer 3.8 million square feet of commercial use space and be home to more than 2,500 condos and apartments. It will be served by the future Route 28 stop on the Silver line.

The enterprise has cleared all the regulatory hurdles necessary for groundbreaking, yet work there probably won’t begin for several years. Ed Hoy, president of Chantilly Crushed Stone, which owns the property, says his company has commitments to complete before construction can commence — including supplying materials for the Metro expansion. Furthermore, the quarry at the site probably will take eight to 10 years to flood to make a lake — the “water” in Waterside’s name.

But what’s the rush?  Like other big projects in the region, one of the reasons  Waterside won county approval was its promised access to Metro. Earlier this year, the transit authority announced that the opening of the second phase of the Silver line would be delayed. With an expected opening in 2019, Waterside’s builders will have at least four years to fine tune their ambitions.