The Port of Virginia is thinking outside the box.

The state-owned port authority is handling a record number of cargo containers. Officials, however, also see an opportunity to move more cargo that doesn’t fit into the standard 20-foot or 40-foot-long shipping containers.

This type of kind of cargo includes: ceiling-high steel tanks for breweries such as Stone Brewing in Richmond and Ballast Point in Botetourt County; steel construction coils weighing 3,000 to 4,000 tons each; and solar panels and wind turbines for energy projects.

Most of these items— including breakbulk and ro-ro (roll-on, roll off) cargo — now are handled at the state’s Newport News Marine Terminal, with some shipped through the Portsmouth and Richmond marine terminals. The Newport News terminal has the space needed to stage and move huge pieces of equipment.

The port says this type of cargo gives it a chance to diversify its portfolio while boosting existing revenue streams.  “We’re increasing our resiliency as an enterprise,” says David Harriss, the Port of Virginia’s director of breakbulk and ro-ro sales. “We’re creating more jobs because this kind of stuff is labor intensive — not just [jobs] inside the fence but outside the fence as well because the warehousing and trucking communities have to grow with it.”

Chesapeake-based Atlantic Core Building Products saved about $150,000 bringing 168 galvanized steel coils — the largest weighing 46,000 pounds — from Europe through Newport News terminal. The coils are used for steel studs and track in commercial buildings. “Breakbulk offered an alternative to trucking from domestic mills or other ports,”  Ryan Smith, president of the Atlantic Core Building Products, says  in an email.  “Our costs were about three to four times less.”

The port has found that handling breakbulk cargo also can help its other businesses. When General Electric was working on Dominion Energy’s Greensville County Power Station outside Emporia, the company used the equivalent of eight ships to bring in equipment to build the plant.
In addition to the massive equipment like pressure drums, heat recovery steam generators and a steam turbine generator, the power station project also created plenty of containerized cargo. “When a company or an engineering procurement company has a project, one of the things they value is that all their cargo is moving to one spot,” says Harriss. “They feel like they have greater command and control over things.” It also could help save money on the inland transportation.

Lambert’s Point, for example, is a Norfolk Southern-owned breakbulk facility in Norfolk that has been operating since 1920. The railroad purchased the facility in the 1980s. 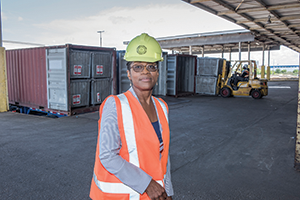 The terminal features 1.2 million square feet of storage space and rail that reaches its dock. “We handle some of your traditional cargoes, such as crude rubber, paper, and some steel products,” says Corine Barbour, general superintendent at Lambert’s Point. The terminal also exports locomotives that are made in the U.S.

In addition to handling breakbulk, Lambert’s Point is one of the world’s largest coal-handling terminals. Coal is considered a bulk commodity.

In addition, Portsmouth-based Crofton Industries has recently purchased several heavy-lift cranes for breakbulk cargo, including one capable of lifting 600 tons, that can be used at terminals in the region. “These breakbulk assets keep your port viable,” says Art Moye, executive vice president of the Virginia Maritime Association. “Many of these commodities are very labor intensive, which obviously is important for the health of our labor force and the programs that support them. It’s very high revenue freight.”

The port hired Harriss two years ago to help grow its breakbulk business.  Harriss previously led the breakbulk, tanker and ro-ro business at Maersk Line Ltd., where he worked under John Reinhart, now the executive director and CEO of the Port of Virginia.

The port has made organizational and pricing changes while expanding the expertise of operations managers. “One of the challenges is developing and keeping a workforce that’s familiar with this type of cargo,” says Harriss. “We have a lot of people who know a lot of things about containers. We have a much smaller cadre of experts that understand breakbulk. But we’re getting there.”

The port’s strategic plan includes doubling its breakbulk business in four years. The port currently handles about 600,000 revenue tons a year, a shipping measurement for breakbulk freight that reflects either a cubic meter or a metric ton.

Because of the nature of large projects involving breakbulk cargo, volume from the business often reflects the spikes like an electrocardiogram, says Harriss. That is why the port is looking to grow its handling of commodities as well as finding logistics solutions for major construction projects.

Currently, executives say breakbulk volume is down in Hampton Roads and throughout the country, but business is likely to pick up in the future. Harriss sees big opportunities as trade increases in response to demand from a growing middle class around the world. “There’s some growth for us that might be achieved through just grabbing market share from competitors like Baltimore or Charleston, but I think we have our sights set on more [untapped market] opportunities as the middle class around the world grows.”

Definitions
Bulk: Commodities that are transported unpackaged in large quantities, including grain and coal.
Breakbulk: General cargo that does not fit into standard containers or cargo bins. Examples include construction equipment, manufacturing materials and ship propellers.
Ro-ro (roll-on/roll-off):  Vessels designed to carry wheeled cargo, such as cars and trucks.