Falls Church-based aerospace and defense contractor Northrop Grumman Corp. has been awarded a $935 million contract from NASA to build the crew quarters for a space station in lunar orbit as part of NASA’s Artemis program, which plans to return astronauts to the moon this decade.

The Fortune 500 corporation will complete the design and development of the Habitation and Logistics Outpost (HALO) module for NASA’s planned Gateway space station and will integrate HALO with the power and propulsion element being built by Colorado-based Maxar Technologies. The HALO module will serve as a crew habitat and will also have three docking ports for visiting spacecraft and other lunar support vehicles. Its design is based on Northrop’s Cygnus spacecraft, which is currently used to deliver supplies and equipment to the International Space Station.

NASA’s Artemis program — which ultimately aims to land the first humans on Mars — is set to send up its first unmanned rocket mission in early November, with plans for a new generation of astronauts, including the first woman, to land on the moon in 2024. (A Government Accountability Office report released on May 26 expressed skepticism that NASA can meet the 2024 goal, noting remaining “technical risks” and the fact that the program’s original landing goal of 2028 had been accelerated by the Trump administration in 2019.)

Northrop Grumman is producing a set of rocket boosters for that November unmanned spacecraft mission, part of a potential $49.5 million contract through which the contractor will produce twin boosters for the next three Artemis missions and three other Space Launch System flights by 2030.

In June 2020, Northrop Grumman won a $187 million NASA contract to design the HALO. Northrop Grumman completed the preliminary design review for HALO in May, confirming the vehicle’s design.

Under the new contract, Northrop will be working towards a critical design review in spring 2022, with delivery of the HALO module to the launch site in 2024. 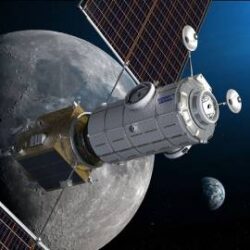 Work will be performed in Utah