Announced Tuesday, Executive Order 43 sets out objectives for statewide energy production. These include powering 30% of the state’s electric system from renewable sources — such as wind and solar —  by 2030 and 100% of its electric supply from carbon-free sources — which woudl include wind and solar as well as nuclear — by 2050.

“We know the importance of a true shift to reliance on renewable energy sources in reducing our carbon footprint, growing our economy, and creating the clean energy jobs of the future,” Northam said in a statement. “This executive order will help ensure that Virginia remains at the forefront of clean energy innovation, meets the urgency of the challenges brought on by climate change and captures the economic, environmental and health benefits of this energy growth in an equitable way that benefits all Virginians.”

The governor wants to have at least 3,000 megawatts of solar and onshore wind under development by 2022 and up to 2,500 megawatts of offshore wind fully developed on an accelerated timeline by 2026.

The executive order also includes a goal of procuring at least 30% of the electricity consumed by the state government from renewable resources by 2022.

Virginia has more than 3,000 megawatts (MW) of solar power in service or under development, according to Northam's order. During the past year, the order adds, solar power employment in the commonwealth rose nearly 10% to 3,890 jobs.

“This is a positive step forward for the energy efficiency industry in Virginia,” Chelsea Harnish, executive director of the Virginia Energy Efficiency Council (VAEEC) said in a statement. “We applaud the governor for prioritizing workforce development and advancing energy efficiency jobs across the commonwealth.”

Virginia’s two largest electric utilities, Dominion Energy  and Appalachian, are members of VAEEC, which is a nonprofit coalition founded in 2012 to advance energy efficiency in Virginia. 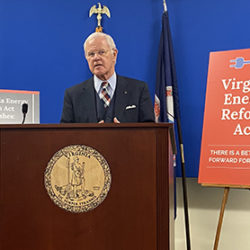