No takers for ‘elderly islands’

Many retirees want to stay connected to the larger community

When Bill Garlett and his wife, Jan, discussed where they wanted to settle after Bill finished a 26-year Army career, retirement havens like Florida and Arizona never came up.

They considered only locations where they had family or career connections, such as New Jersey, Wisconsin and Georgia.  The place they talked about most, though, was the Hampton Roads area where Bill, an Army band commander, had been assigned frequently.

“We both loved it down here,” says Bill, 63. “I had spent most of my adult life here, because my dad’s family was here and because of my career. We knew the community. We had friends here. It just seemed natural to come back to this area.”

A year ago, the Garletts moved into an eighth-floor apartment at the Chamberlin, a waterfront senior living community on the former Fort Monroe property in Hampton. They no longer need to cook (they can eat chef-prepared meals in the community dining room) or worry about home maintenance issues, but that doesn’t mean they’re taking it easy.

Jan meets frequently with longtime friends and takes walks with Bill on the nearby seawall. Bill is the conductor of a local 60-piece wind ensemble and frequently goes to Joint Base Langley-Eustis in Newport News to participate in U.S. Army Band alumni concerts. He also helps with the Chamberlin’s landscaping.

“We wanted to be freed up to do more of what we wanted to do, but we’re not ready to settle down,” says Bill. “And here, we don’t have to. It provides us the best of all worlds.

Staying active
The Garletts are part of a growing trend. Many retirees are passing on the idea of “getting away from it all.” Instead they choose to remain closely tied to their communities, families or ongoing interests.

“Baby boomers and even the current generation of retirees no longer want to be on what I call ‘elderly islands’ that are built out in the middle of nowhere that cut them off from the larger community,” explains Andrew Carle, executive-in-residence and founding director of the Program in Senior Housing Administration at George Mason University in Fairfax. “And they don’t want to sit on the front porch with people their own age watching the sun go up and down. They want the trifecta: They want active. They want intellectually stimulating. And they want intergenerational environments.”

Virginia senior housing operators are well aware of the trend, and in response, they are rethinking where they build retirement communities, the types of activities and programs they offer and how they market themselves, Carle says. “What’s become really important is figuring out, ‘How do we integrate these communities into the larger community around them so people can stay engaged?’ ” 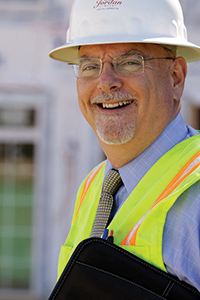 COO Brent Russell says Harmony will open four new communities in Virginia this year, with another 12 communities under development for next year and 2017. These include the Crossings at Blacksburg, which is less than three miles from the Virginia Tech campus; the Crossings at Chantilly, located close to a number of parks and within 10 miles of George Mason University; and the Crossings at Suffolk, which is within walking distance of a Starbucks and across the street from the Harbour View West Shopping Center.

“We’ve definitely seen a change where people have a relationship in the community, whether it’s their church, their favorite restaurant, an activity, their family members or a group of friends, and they don’t want to move far away from that,” Russell says.

That was certainly true for Ercelle Morris, 93. She had the option to move to California to be closer to her daughter and grandchildren but opted instead to move into the Crossings at Bon Air, which is just five miles from her longtime home in Richmond. “My friends are here, my doctors are here, everything that is familiar to me and that I enjoy is right here, so I never seriously considered leaving,” says Morris. A lifelong Virginian, she still attends a meeting every month at the Epworth United Methodist Church, which her grandfather helped build, goes out to dinner with friends and plays in several different bridge clubs.

Many retirees don’t want to break with lifelong connections they’ve forged with institutions and employers. Falcons Landing in Potomac Falls is a niche, or “affinity,” community for retired military officers and senior civil-service employees who share a bond over public service and a love of the D.C. metropolitan region. 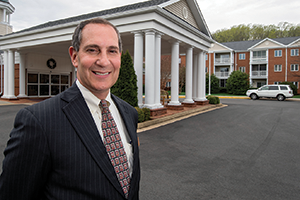 For The Colonnades, a retirement community in Charlottesville, the link is the University of Virginia. Executive director Mark Kastan estimates that at least 40 percent of residents taught or worked at U.Va. or have an adult child who works there now, while many others had a child or grandchild attend the school.

“Having the university in town definitely drives demand for the community here,” he says, noting his residents especially enjoy going to the campus to see lectures, concerts, plays and U.Va. sports events or just to walk around and mingle.

Cultivating community ties
Location is only part of the equation, however. Real-world and intergenerational involvement is increasingly fostered by the retirement communities. “We spend a great deal of time organizing and putting in place transportation away from the development,” says Russell. “We’ve got a bus and a van at each site, and they are always running.”

At the Chamberlin, residents have opportunities to accompany the kitchen staff in digging for clams they’ll eat for dinner, and at other Harmony sites, residents go to local farms to pick strawberries and blueberries, shuck corn and make goat cheese. At the Harmony’s Chesterfield County community, a certified water aerobics instructor takes residents to a local community pool for lessons. “They get out and have a blast,” says Russell.

Atlantic Shores, a retirement community in Virginia Beach, went well beyond organizing daytrips a few years ago when it initiated the “Puppy Love” program. For 14 months, resident volunteers raised puppies for the Guiding Eyes for the Blind dog school. As part of the effort, residents took the puppies to weekly training classes and out into the community for exposure and socialization.

“We enlisted the help of two local elementary schools, and we would take the puppies there on a regular basis,” recalls Beth Pursley, spokeswoman for Atlantic Shores. “Right from the start, the kids were involved with the residents and the puppies, and so it was a wonderful way to bring the generations together.”

The Colonnades frequently puts together trips to area wineries, historical sites, restaurants and various music and arts venues. For large sports events, Colonnades officials worked out an agreement with U.Va. so residents can get off at a venue’s entrance and go directly to their seats. “Our residents like going out, but they still want comfort and convenience,” Kastan says. “They don’t like the idea of being pushed or jostled in a big crowd.”

For this reason, communities are also increasingly going out of their way to bring in the outside world. When lecturers or musicians come to U.Va., Kastan invites  them to also make an appearance at the Colonnades. Harmony’s Richmond community works with the Virginia Commonwealth University School of Medicine to bring in medical students to “practice” taking the medical history and vitals of residents.
Atlantic Shores opens its 100-acre campus to the public each May for an annual tour of residents’ homes and gardens, as well as displays of their artwork. Two years ago, it began hosting an annual, free “Evening with Downton Abbey,” an on-site party that provided residents and other fans of the PBS show with the chance to dress up in period clothing, dance to 1920s music and enjoy British-inspired cuisine.

The Colonnades offers Wii bowling, Wii Jeopardy and other Internet-based games, which allow community members to interact with their family and each other. Meanwhile a computer center offers all manner of social media and videoconferencing resources, including Skype, for long-distance calls.

Atlantic Shores will soon unveil MyAtlanticShores, an internal social media site for residents, their family, friends and staff. “It’s a way for everyone to stay connected and share with each other and know what’s going on in the community, but it’s only for people associated with the community, so it’s very private,” says Pursley, noting that it also includes online sign-up sheets for trips and events.

Harmony has started incorporating outdoor living areas, complete with double grills, patios and sail-flag covers, so residents can host barbecues for family and friends. It also features on-site theaters at each development and makes them available to the community, including for support groups, meetings and entertainment.

Russell says that these types of accommodations increasingly are critical to a community’s growth. “Because of where the economy has been, I think people are supporting each other now more than ever and keeping check on one another,” says Russell. “And we see more families and friends coming in and spending time with their loved ones much more frequently. It’s not just a quick pop-in type visit. They’re staying, taking part in activities and really enjoying those visits.”

And as the 78-million-member baby boom generation continues to flood the retirement rolls, Carle says, it’s critical to understand this changing reality.

“It’s not enough to have a beautiful campus and buildings — you’ve got to study and fully understand what this generation wants,” he states. “They may be retiring, but they don’t want to stop living. They really want to continue to contribute to their communities and be fully engaged with the people they care about and share interests with.”