Nation’s second-oldest college is plugged into the regional economy

Williamsburg did not exist in 1693 when England’s King William III and Queen Mary II chartered a “perpetual College of Divinity, Philosophy, Languages, and other good Arts and Sciences” in the Virginia colony. More than 320 years later, the city and the College of William & Mary enjoy a mutually beneficial relationship.

The nation’s second-oldest college (Harvard was founded in 1636), William & Mary is known as one of the nation’s “public ivy” universities, offering a private-college education at a public-school price. Its historic main campus covers 1,200 acres in downtown Williamsburg, with four undergraduate programs offered in Washington, D.C. The university’s Virginia Institute of Marine Sciences (VIMS), one of the nation’s top marine research and education centers, occupies 42 acres in Gloucester Point.

William & Mary enrolls 6,300 undergraduate and 2,100 graduate students and employs more than 2,300 people on its main campus. A 2006 study showed that spending by the university, students, staff, faculty and campus visitors had an economic impact of more than $500 million on the commonwealth. But the university’s financial contributions transcend the numbers, school officials say, with faculty, students and graduates applying their knowledge and skills to a variety of research, business and governmental endeavors.

James R. Golden groups the school’s impact into four categories: students, expenditures and research, connections to the broader business community and civic leadership. “Our biggest technology transfer happens every May when we send out our new graduates,” says Golden, who retired as William & Mary’s vice president for strategic initiatives last August and now serves as a voluntary senior counselor to university President Taylor Reveley. “That’s the heart of what we do, and William & Mary does that extremely well. We really deliver prepared folks who go out and have great careers.”

A valuable recruiting tool
That’s a view shared by local economic development officials who tout the venerable institution to companies considering relocating or expanding in Hampton Roads. Because of William & Mary’s long history as a good school, international companies, especially, “recognize the value of an education at that institution and will relocate their families here,” says Steve Cook, vice president of the Norfolk-based Hampton Roads Economic Development Alliance.
The university’s collaboration with Williamsburg and James City and York counties in the Triangle Business Incubator also helps attract new business. The Alan B. Miller Entrepreneurship Center in William & Mary’s Mason School of Business manages the incubator that assists fledgling businesses in getting off the ground. “Assets like that often provide enticement to companies to come to the region,” Cook says. “They see that William & Mary can help them get their business started.” 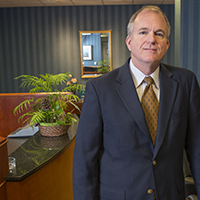 Cook and his HREDA colleagues make sure businesses touring the region visit the Mason School. “The Mason School of Business is a great school,” Cook adds. “It obviously produces a lot of great graduates. Their influence is drawn across a number of industries.”

Many Mason graduates remain in the region to start their own businesses or work for established companies, while others retire in Williamsburg. That signifies an important connection for the region and the commonwealth, Golden says, noting that William & Mary is the only U.S. school to give MBA students any-time access to an executive mentor. The business school’s Executive Partners Program pairs more than 100 senior business leaders with MBA students. “It’s a real strength to engage them in the life of the university,” he adds. “They enjoy the opportunity to share their expertise, and the students benefit from their guidance and connections.”

Beginning this fall, MBA students will be able to attain their degree online. “We recognize that many students don’t have the time and schedule to participate in a regular program,” Golden says.

Local involvement
Collaborating on economic development activities throughout Hampton Roads benefits the university, as well as businesses and the region as a whole. “We pitch in to help in ways that are pertinent to the university,” says Julie Summs, William & Mary’s director of economic development and business innovation. Students gain career experience interning with local businesses, while fledgling entrepreneurs can obtain advice and support, and faculty and students tackle a variety of research, including marine science, geriatrics, modeling and simulation and bioinformatics.

The university secures more than  $50 million annually in sponsored research, including projects with NASA and Jefferson Lab. Last year, Forbes magazine placed William & Mary 22nd among research universities, not bad for an institution without an engineering or medical school. “We are very strong in the basic sciences of physics, biology, chemistry and computer science,” Golden notes. “Our small, but effective Department of Applied Sciences is world class in connections.”

In addition, VIMS provides a unique venue for the school’s economic development endeavors. Researchers meet quarterly with industry leaders to discuss their work, including efforts to develop disease-resistant, fast-growing oysters and innovations in measuring small concentrations of contaminants in the Chesapeake Bay. “VIMS does a lot of sponsored research and develops potential connections with the private sector, which lead to significant corporate investments,” Golden says.

Two years ago, the university received the largest single financial award in its history in the form of a $25 million, five-year grant from the U.S. Agency for International Development to track more than $5.5 trillion in foreign aid. Faculty and student research led to the development of AidData, the largest database of international investments by world governments. “AidData makes detailed information about more than one million aid distribution projects more accessible to a variety of stakeholders.” Summs says.  “It creates the tools to allow people to target, deliver and evaluate aid.”

Helping startups
Getting university research into the public domain falls under the Technology Transfer Office.  “We’re not a big research university, but a lot of very good research goes on here,” says Jason McDevitt, president of the William & Mary Intellectual Fund and director of the Technology Transfer Office, which licenses research findings to companies to use in commercialized ventures. “We want to use it to benefit the economy.”
Startups are particularly attractive, McDevitt adds. “We like to do startups because there are additional economic benefits. For example, professionals looking to start companies in computer software can provide jobs for recent graduates where they wouldn’t have to leave the area.”

That was the case with Vertical Carbon Technologies, a Newport News startup founded by William & Mary doctoral graduate Xin Zhao, who is using university research on graphene (pure carbon in the form of a thin sheet) to improve energy density in batteries.  “They’re doing well and making progress in developing new materials,” McDevitt says.

Researchers also worked with Mobjack Binnacle Products of Richmond to develop biodegradable escape panels for sunken fishing traps that can no longer be used for fishing but still deplete the marine population. “The traps land at the bottom of the water, capturing sea animals that won’t be harvested,” McDevitt explains. “The biodegradable panel lasts during the fishing season and breaks down after the fisherman’s use is done, allowing unwanted animals caught in the trap to escape.”

William & Mary’s business innovation program, launched in late 2013, aims to make the university more financially self-sufficient in an era of diminishing public funding. The program looks for cost-effective ways to promote innovation in business processes, find new revenue sources and redistribute funds to the school’s top priorities.  “We want to do our part to make sure we spend the dollars we have in the best way possible and make sure we are the most effective, efficient and organized business operation we can be,” Summs says.

Development projects
The initiative includes signing onto projects that enhance the university’s financial status while meeting student needs. In 2000, the nonprofit William & Mary Foundation partnered with C.C. Casey Limited Co. to develop 365 acres adjacent to the west end of campus into a mixed-used, urban community called New Town. Today, New Town has a variety of homes, more than 170 shops and restaurants and Discovery Business Park, which offers office sites where firms can collaborate on research and development with William & Mary faculty and students. “I definitely think it’s a draw for both residents and tourists,” Summs says. “Our employees are patrons of the shops, restaurants and services.”

A student-focused development with apartments and restaurants opened in 2011 as Tribe Square. A student survey had indicated a lack of off-campus retail and dining establishments for students.  “Students felt that the academics here were wonderful, but they needed more things to do,” says Nancy Buchanan, executive director of the William & Mary Real Estate Foundation, which developed Tribe Square. “The restaurants were built to satisfy that need, and it made a lot of sense to add housing and maximize the use of the property.”

Developments like Tribe Square and New Town, along with companies that market university research and a steady stream of new graduates can provide leverage for Williamsburg to capitalize on its position at the center of a Hampton Roads-Richmond mega-region. “We’re halfway between Richmond and Norfolk and can actively promote a conversation of how these two regions can work together more effectively in areas like transportation and economic diversification,” Golden says. “We want to convince people that this is a great place to come and do business.”