The National Football League is taking charge of the investigation into allegations of sexual harassment and verbal abuse within the Ashburn-based Washington Football Team organization, according to a statement from team owner Dan Snyder.

According to reports from the NFL, on Monday Commissioner Roger Goodell spoke with Snyder, who was “supportive of the step.”

Washington owner Daniel Snyder was informed today that the NFL is taking over the investigation into alleged workplace issues reported by the @WashingtonPost, per me and @MikeGarafolo. Commissioner Roger Goodell and Snyder spoke today and Snyder was supportive of the step.

“Recently, The Washington Football Team launched an independent third-party investigation into allegations about our culture and incidents of harassment,” Snyder and his wife, Tanya, said in a statement. “In conversations with Commissioner Goodell, Tanya and I suggested that the NFL assume full oversight of the investigation so that the results are thorough, complete and trusted by the fans, the players, our employees and the public. I appreciate Commissioner Goodell agreeing to our suggestion and the entire Washington Football Team remains committed to fully cooperating with all aspects of the investigation.”

Following a July 16 Washington Post report that detailed the experiences of 15 former female employees who said they were sexually harassed and verbally abused during their time with the team, The Associated Press reported that Snyder had hired Washington, D.C.-based law firm Wilkinson Walsh LLP to review the team’s culture, policies and allegations of workplace misconduct. The announcement came amid rumors trending on social media and on sports news sites that The Washington Post was going to publish an exposé about Snyder (who purchased the NFL team in 1999 from Jack Kent Cooke’s estate for $800 million) and the team.

In order to cooperate with the law firm during its investigations, Snyder told the NFL he will release current and former team employees from nondisclosure agreements, according to The Washington Post.

Former employee Brad Baker told The Washington Post that Larry Michael (then the team’s lead broadcaster and a senior vice president) instructed staffers to make a video for Snyder that shows moments when women’s nipples were inadvertently exposed as they shifted positions or adjusted props during a 2008 cheerleader swimsuit calendar photo shoot.

Snyder and the team did not respond to The Washington Post’s request for comment and Michael denied the allegations.

Amid the workplace controversy, the team is also undergoing a name change after extensive discussion on what many see as a discriminatory and derogatory name against Native Americans. The team on July 13 announced the retirement of the Redskins team name and logo and is accepting input for branding suggestions through its new website Washington Journey.

Despite a losing streak, name controversy and workplace misconduct allegations, the team in 2019 had the seventh-highest NFL team valuation at $3.4 billion, according to Forbes. 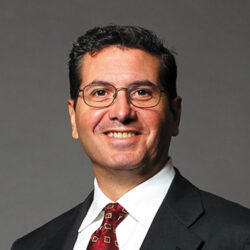