“About every 15 minutes,” Shawn Avery’s phone at the Hampton Roads Workforce Council rings with an employer calling to find skilled workers to fill vacancies, he says.

Avery is president and CEO of the council, which oversees federally funded workforce development programs and links employers and workers. In the present tight labor market, he says, employers in ship repair, manufacturing, construction, information technology, hospitality and health care have the greatest need for employees.

Veterans are among the most valued workers, Avery says, because of the skills they gain and hone during years of military service, including punctuality and the ability to collaborate with co-workers.

“They come with those soft skills and those workplace skills that everybody is always looking for — the ability to follow leads and communication skills,” says Avery. “We continually hear, ‘If you get us connected with veterans, that’d be fantastic.’ So, it is always on top of mind when we’re talking with businesses.”

As many as 12,000 service members separate from the military annually in Hampton Roads, which has branches from every service but is Navy-heavy. Avery and other workforce officials say they follow a rule of thirds when thinking about veterans: About a third will stay, a third will return to their home states, and another third is undecided about their futures.

Retaining transitioning service members to help fill the many manufacturing and maritime-related jobs available across the region is a “sweet spot” that’s become a focus for Avery and others.

In just the first two months of 2022, there were more than 106,656 unique job postings across Hampton Roads, according to data from the workforce council. More than 6,500 jobs were in manufacturing, and 943 of those were at Huntington Ingalls Industries, which builds and repairs naval vessels and is Virginia’s largest industrial employer.

And other labor needs exist, too. During the same time frame, there were 3,284 construction openings listed and another 2,993 in transportation and warehousing.

Hampton Roads Shipping Association President Roger Giesinger says he’s recently hired more than 100 longshoremen and is continuing to seek more. The association represents various shipping lines, agents and terminals and works in concert with the local longshoremen’s union to fill positions. He says he may also have a need for crane operators in the future.

One program that aims to help employers and veterans find jobs is Operation Next, a national manufacturing workforce development initiative for military veterans and their spouses. The federally funded program, with presences in Kentucky, Michigan, Florida and other locations, expanded to Hampton Roads late last year and is a part of the Maritime Industrial Base Ecosystem at Old Dominion University.

Operation Next is one of many programs in Virginia designed to link veterans with skills training and jobs, as well as internship opportunities and apprenticeships.

Russell Czack is a retired Navy commander and senior program manager for Operation Next, which is based in Hampton Roads out of ODU’s Virginia Modeling, Analysis and Simulation Center in Suffolk. He says the program fills a critical need by offering retiring service members and their spouses training for skilled jobs, including welding, numerical control machining, and mechanical and electrical trades, all intended to meet the needs of the region’s maritime industry, including ship repair.

“If you just look just at that group of trades, there’s over 300 positions right now in Hampton Roads listed for those [jobs],” Czack says. Operation Next offers service members and spouses free training opportunities through community colleges and hands-on training that can lead to transferable certifications and, finally, jobs. So far, Czack has talked with about 50 potential program participants, and about 20 have signed on.

Beyond soft skills, veterans bring other pluses that tend to put them in high demand from employers, including the ability to adapt and learn on the job.

“You can train somebody to do the actual work that you want them to do,” Czack says. “It’s a little harder to instill within them the importance of being on time, to work as a team, to be a leader, to take care of other people. These are traits that the military is very good at instilling and training their people.”

While Operation Next doesn’t require participants to stay in the region after finishing its trainings, it can help root them to their communities, Czack notes. That’s also a major goal of the workforce council, which has veterans’ employment centers in Newport News and Norfolk, linking vets to jobs and other services.

Sultan Camp, director of Hampton Roads’ veterans’ employment centers and a Navy veteran, says he has a waitlist of employers wanting to attend weekly sessions to meet prospective workers.

Czack notes that the Department of Defense, which has backed Operation Next since 2019, is demonstrating its realization that it needs to help service members departing the military for the civilian world, as well as the needs of defense contractors in manufacturing.

“In a way, the Department of Defense [is] putting their money where their mouth is, saying, ‘Hey, we need to make sure that America continues to build its workforce to support manufacturing.’” 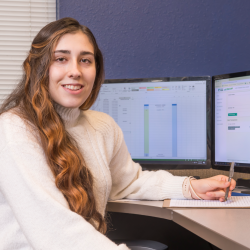