Republicans, Democrats to raise taxes for I-81 improvement

The 2019 General Assembly session was marked by political scandal and election-year gamesmanship, so it came as something of a surprise when the legislature did what previous generations of lawmakers have failed to do: establish dedicated funding for improving Interstate 81.

New legislation for the first time creates dedicated revenue streams and a fund for I-81, along with a committee for prioritizing work along Virginia’s 325-mile portion of the interstate.

Localities along the I-81 corridor will see the price at the gas pump go up when a 2.1% regional fuels tax goes into effect July 1. The revenue generated by the tax, expected to be around $150 million annually, will go toward $2.2 billion worth of improvements recommended for I-81 by the Commonwealth Transportation Board.

‘A historic vote’
It speaks to the urgency of I-81’s problems that enough Republicans and Democrats in the House and Senate backed a plan to raise taxes. An editorial by The Roanoke Times called passage of the legislation a “historic vote.”

“I’ve never actually been a part of such a collaborative bipartisan effort,” says Secretary of Transportation Shannon Valentine. “We were putting a plan together that would address the safety needs along the corridor, the economic needs, the reliability needs that quite frankly have been kicked down the road for decades.”

Widespread congestion and safety issues on I-81 have been well known for years. The challenge in addressing the problem has been figuring out how to foot the bill for improvements. 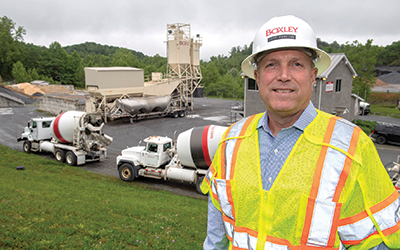 So, just how bad is the stretch of I-81 that runs from  Winchester to Bristol in western Virginia? Jeff Perkins, president of Boxley Materials Co. in Roanoke, won’t let his college-age children drive home for Thanksgiving on I-81, which first began to be built in 1957. Between 2013 and 2017, more than 11,000 crashes occurred in the I-81 corridor. (In the same period, I-64 saw more than 21,000 crashes and I-95 saw more than 25,000 crashes). The unpredictability of traffic congestion caused by accidents translates into delays for commuters and shipments.

“It costs us money to not be able to move product efficiently,” says Perkins. “If you expect to get so much product out per day and your trucks are stuck in traffic, you just can’t get it all delivered in the day that you expect.”

Winding road ahead
Just before the start of this year’s General Assembly session, Gov. Ralph Northam, a Democrat, stood with four Republican lawmakers from districts along the I-81 corridor to push for a plan that would have added tolls to the interstate to fund improvements.

“I knew that we were never going to make any significant improvements to not only I-81 but the transportation system in this region if we didn’t come up with a funding stream,” said Austin in an April interview. “If we didn’t do it, who knows what the consequences would be.”

The Virginia Trucking Association issued a statement in January opposing tolls on I-81 on the grounds they would raise the costs of moving goods and would divert trucks onto secondary roads. The group supported a diesel fuel tax and a regional fuel tax identified in the I-81 Corridor Improvement Plan produced last year. The plan also studied toll financing for I-81 improvements.

“Tolling is just extremely inefficient,” says Dale Bennett, the trucking association’s president. “Nobody likes paying higher taxes and fees, but our industry is also realistic that highways are important to our business and the customers we serve.”

Previous proposal
It wasn’t the first time tolls have been floated as a solution for I-81.

In 2003, two private-sector groups gave to the Virginia Department of Transportation detailed proposals for widening I-81. Both plans depended on tolls, and they ultimately died.

As the session got underway this year, debate over the best way to finance I-81 improvements ramped up and appeared to be heading toward yet another impasse.

Northern Virginia officials balked at the idea that, under the legislation backed by Northam, I-81 commuters would be able to pay $30 for an annual pass for unlimited use of the interstate. Northern Virginia commuters, lawmakers noted, face tolls daily. The legislation passed in the House and Senate only after the tolling portion had been removed, leaving only provisions to create a fund and to establish directives for a new committee. A number of other I-81-related bills fizzled out.

By the end of session, Northam’s political capital appeared depleted by the discovery of a picture on his medical school yearbook page showing one man in blackface and another in a Ku Klux Klan outfit. The governor initially apologized for the photo and then changed his story, saying he wasn’t either man in the picture. Northam, however, admitted he had once appeared in blackface in a dance contest in 1984.

Nevertheless, faced with legislation that essentially called for more discussion on what to do about I-81, Northam proposed amending the bills passed by the legislature to add the financing options that would raise taxes.

“It was a challenge because I’m as conservative as my colleagues are,” says Austin, a Republican delegate representing a district in the I-81 corridor. “At the same time, I’m pragmatic and realistic in regard to the fact that, when you have a problem, you’ve got to fix it, and it’s not going to fix itself.”

Valentine, the transportation secretary, says her team met with the Virginia Trucking Association early on to try to address its concerns. Both sides looked at how Virginia’s registration fees and taxes compared with the rates of other states along the I-81 corridor.

“We said to them, ‘We just want to either get to the average on the corridor or be below,’” Valentine says, adding part of the goal was to have Virginia businesses remain competitive. “That was how we actually began negotiating what would an increase in revenue look like.”

In addition to the regional fuels tax, the final legislation establishes new funding streams for other interstates in Virginia. Later this year, an increase in state truck registration fees will go into effect. An increased road tax will be phased in beginning in July and fully implemented in 2020. An increase to the diesel tax will be implemented in 2021. The revenue from these sources will be distributed statewide based on truck miles traveled, with portions reserved for the Northern Virginia Transportation Authority and the Commonwealth Transportation Board for other interstate corridor improvements.

The new taxes and fees are expected eventually to drum up each year around $40 million for I-95, nearly $28 million for I-64 and about $20 million that will go to the Northern Virginia Transportation Authority. Another $43 million will be set aside for other improvements in interstate highway corridors. The state projects that, for fiscal 2020, the revenue package will bring in $155.8 million and gradually increase within two years to bringing in around $282 million each fiscal year.

Revenue from all users
Bennett, the trucking association leader, says a sticking point for him was finding a proposal that relied on revenues generated by all users of I-81 — not just truckers.

“One of the things we expressed concern about is that any funding proposal needed to have all users contributing to the funding to the new funding source, and the regional fuel tax does that,” Bennett says.

A key factor in the I-81 debate was the groundwork laid by the I-81 Corridor Improvement Plan adopted by the Commonwealth Transportation Board in December. The plan, prepared by the consulting firm Kimley-Horn and Associates, identified the targeted projects set to be done along the corridor. To develop the plan, 12 public meetings and hearings were held. They attracted 950 people and more than 2,000 public comments.

“There was a true case built and an awareness of the issues brought to the forefront,” says Valentine. “There was no way that people could not see how important this corridor was and how critical the needs were.”

Del. Chris L. Hurst, a freshman Democrat from Blacksburg, says there was a feeling that now was the time for Western Virginia lawmakers to seize the moment.

“As demographics continue to change in Virginia, many of us who live in this rural part of the Commonwealth really felt like, if we didn’t do the responsible thing that our constituents voted us into office to do, it might become precipitously more difficult to get dedicated funding for Interstate 81 in the future,” says Hurst.

In the end, a funding package that raised regional and state taxes succeeded where previous proposals for tolls had failed. Given that they had tried and failed before, why bother proposing tolls at all?

Marianne Radcliff, a contract lobbyist who represented a group of business leaders in the corridor that formed to support new revenue for I-81, thinks the case for tolls had to fail again to clear the way for a conversation about taxes.

“Bills reliant on taxes to provide the needed revenue were seen as less likely to make it through the committee process, particularly in an election year,” says Radcliff, president of Richmond-based Kemper Consulting. “As a result of the robust discussion surrounding the proposed legislation, tolls, taxes and various combinations of the two were discussed widely. It is fair to say that, in order to end up where we did, with a proposal fully reliant on taxes, the process was necessary to thoroughly vet the effects of all of the alternatives.”

‘This will not fix I-81’
Even as legislators and policy makers celebrate I-81’s new funding stream, questions about the future of the road and the state’s transportation policy remain.

The I-81 package is just a start and won’t solve all of the interstate’s problems anytime soon. Finishing the $2.2 billion worth of I-81 projects targeted by the new funding could take up to 10 years.  Meanwhile, the Commonwealth Transportation Board has identified additional I-81 projects costing another $2.1 billion that still need to be addressed.

“This will not fix I-81,” says Austin. “This will tremendously improve I-81 and help us reach ultimately — many, many years from now — a fix because it puts in place a dedicated funding stream. But to call it a fix is probably the wrong definition.”

Then there is the problem with the viability of fuel taxes as electric vehicles continue to rise in popularity. Toyota introduced the first mass-produced hybrid car, the Prius, in 1997, and sales for hybrids and electric cars have grown since then. By 2025, hybrids and electric vehicles will account for an estimated 30 percent of all vehicle sales, according to a J.P. Morgan report issued in October.

Stephen C. Brich, commissioner of the Virginia Department of Transportation, says there is concern about the reliance on motor fuels tax as a long-term sustainable funding mechanism. Hampton Roads and Northern Virginia have regional fuel taxes (raising the question of whether other parts of the state will need their own regional fuel taxes so their roads don’t get left behind). Brich says Virginia will need to identify other revenue sources to be able to address the state’s transportation needs.

“We are starting to feel those effects right now just by the entrance of the hybrids and electric vehicles,” says Brich. “The dilemma that we have is only going to be worsened.”