New kids on the block(chain)

Are cryptocurrencies the future of finance?

Jeremy Alessi was a gamer and software developer in Norfolk about a decade ago when he first heard of Bitcoin, the mysterious and complicated cryptocurrency. “I thought it was a dumb idea,” he says.

Four years later, after his father-in-law mentioned hearing a National Public Radio story about the currency, Alessi decided to take a second look. He read a white paper about Bitcoin and immersed himself in its details well into the night. He was a convert. His timing was good.

In 2012, Alessi would help launch Virginia Beach-based Bcause LLC, a speculative bitcoin mining business. Bcause would receive more than $12 million from investors, attract a $500,000 Virginia Beach economic development grant and employ 36 people at its height, before it was ordered by a federal judge to liquidate its assets in October, following the company’s voluntary bankruptcy filing earlier this year.

For Bcause and other Virginia companies that have entered the cryptocurrency space, this volatile new financial sector has been a roller coaster journey of high hopes, altered plans and sobering realizations.

Despite the fact that cryptocurrency remains largely bewildering to the general public, it has emerged further into the mainstream this year amid reports of Facebook’s controversial plans to launch its own cryptocurrency, libra. Already facing scrutiny from U.S. and European officials, the project hit a serious snag in October, after it lost support from seven high-profile financial partners, including PayPal, Visa and Mastercard.

Down the rabbit hole
“It’s a new industry, it’s a new business model. Not a lot of people understand how this works,” which has made it difficult for some startups to attract venture capital investments, says Richmond attorney Alex Mejias. He has specialized in representing startups focused on cryptocurrency and blockchain-based models.

Some of his clients haven’t been able to stay in business. While Mejias is a believer in the technology, he’s not a cryptocurrency market player. “I tell people, ‘Do not trade Bitcoin.’ I don’t,” he says. “It’s such a volatile market that you have to really know what you’re doing and have a high tolerance for risk.”

Mejias saw his cryptocurrency practice fall off this year, he says, after the Securities and Exchange Commission issued regulations that made it a lot more difficult for companies to issue initial coin offerings (ICOs) on which many startups had depended for capital.

In late September, the SEC ordered one of the largest blockchain technology companies, Block.one, to pay $24 million in penalties for conducting an unregistered ICO of digital tokens that raised a record $4.1 billion in 2017 and 2018.

Block.one, which was co-founded by Virginia native and Virginia Tech graduate Dan Larimer, recently announced plans to locate its $10 million U.S. headquarters in Arlington County, creating 170 jobs. Registered in the Cayman Islands with offices in Hong Kong and Los Angeles, Block.one has an operation center in Blacksburg that employs more than 80 engineering and research and development workers.

Larimer will be one of the featured speakers at Blocksburg Summit 2019, a blockchain conference hosted by the Virginia Tech College of Engineering’s Department of Computer Science on Nov. 10-12 at The Inn at Virginia Tech and Skelton Conference Center in Blacksburg.

If Block.one is the big kid in town, RoundlyX is the new kid looking to latch onto the buzz. Will Trible, a web designer with a degree from James Madison University, invested in Bitcoin early on. He reconnected in Richmond with a boyhood friend, Andrew Elliott, who served as an intelligence officer in the Marine Corps in Afghanistan and earned an MBA from Georgetown University, and they started looking for a gap in the startup landscape. Cryptocurrency seemed like a worthwhile opening.

In 2017, they founded Coin Savage as a cryptocurrency news and analysis website with a leaderboard that tracks its analysts’ investments, much like Morningstar, the investment research firm. After two years, they’re changing focus, folding that into a new venture, RoundlyX, which they launched in April. RoundlyX allows users to buy cryptocurrency by rounding up their credit card purchases automatically.

Elliott says it’s a low-risk way to enter the cryptocurrency market, which has fluctuated wildly. “We had so much volatility, it scares mainstream folks away sometimes,” Elliott says. “You’re making it so people can’t really overextend. … It’s a great way to get people in.”

Coin Savage’s content and leaderboard will be integrated into RoundlyX. So far, the company has more than 700 users in the United States, Canada and the United Kingdom. Elliott and Trible make their money with site subscriptions and affiliated products.

Still, despite promising startups like RoundlyX and success stories like       Block.one, the cryptocurrency world “is very much unproven ground,” Mejias cautions. People seeking a way to get rich quick should “be very, very careful.”

The race is on
So how does cryptocurrency work?

Bitcoin, the leading cryptocurrency today, is “a really elegant system. It’s a combination of math, game system and economics — the whole setup of Bitcoin is really cool,” Mejias says.

Unlike traditional currency, you can’t hold a Bitcoin or any of the hundreds of other cryptocurrencies in your hand. They exist only on the internet and most cryptocurrencies run on blockchain technology, which was invented in 2008. What’s blockchain? Put simply, it is a digital ledger that stores transactions in virtual blocks. Every block contains a record of thousands of transactions and a blockchain is a cumulative ledger, composed of a continually growing number of blocks. Blockchain technology is expected to have applications for a number of industries, ranging from accounting to real estate.

Cryptocurrency proponents say the system is superior to and more secure than the traditional monetary system. For one thing, the traditional banking system can sometimes take as long as a few days to transfer money to a retailer following a debit transaction, but cryptocurrency financial transactions are virtually instantaneous. Additionally, larger blockchains are practically hacker-proof, and peer-to-peer financial transactions cost much less because there are no middlemen such as bankers or brokers involved.

Transactions on Bitcoin’s blockchain are verified by miners who earn bitcoins for the service. Bitcoin miners use high-powered computers stacked in warehouses requiring vast amounts of electricity to solve — some descriptions say it’s by guessing — complex math problems to update a blockchain ledger of transactions. Think of it as a high-tech version of a guy wearing a green visor making an entry into a dusty ledger, except everyone — including you — can see the ledger instantly. The theory is, this makes the transactions more secure.

Bitcoin mining is a race — the first miner to finish verifying a block of transactions earns about 12.5 bitcoins, which are now worth around $8,200 U.S. apiece. New blocks are created roughly every 10 minutes.
When Bitcoin was founded a decade ago, a miner could run the software on their home computer. Now, in order to compete, it takes powerful — and expensive — computers solely dedicated to mining.

A work in progress
Bcause opted to enter the cryptocurrency market through mining, and it provides a cautionary tale about the industry’s volatility. 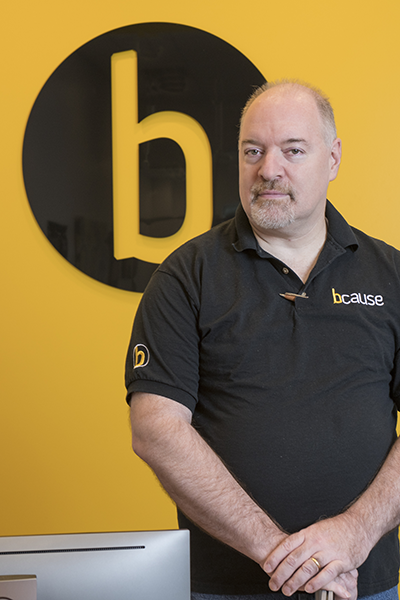 For Bcause, mining was up and down. There were some early dry holes due to problems with the companies supplying computers to Bcause. But the company also earned returns on some investments within weeks. “We learned, OK, this mining thing is sort of risky, but you can make money if you’re partnered with the right [hardware] manufacturer,” says Bcause co-founder and former acting CEO Tom Flake.

A round of financing raised $5 million. BMG, a mining company, advanced Bcause nearly $7.8 million in November 2017 as part of a hosting agreement to mine cryptocurrency.

Following the mining market’s late 2018 crash, Bcause filed for bankruptcy in April 2019 in federal court in Illinois, declaring debts of more than $14 million, including $4 million in arrears. The bad news continued, though. In June a power surge at the Virginia Beach facility destroyed or damaged 325 mining computers owned by BMG, according to a settlement agreement filed with the bankruptcy court. As a result, BMG says it’s owed nearly $7.8 million and it terminated its hosting agreement in October, pulling its computers.

Flake was still optimistic that the company could work through reorganization, but in early October a federal bankruptcy court judge ordered the company to liquidate its assets and Bcause ceased operations.

As for Alessi, although he did some programming for Bcause in the early days and is listed as a co-founder, he hasn’t been in touch with executives there for months. He has a decidedly more reserved view of cryptocurrency these days and no longer invests in it.

Alessi has hopes for the blockchain/cryptocurrency industry, though. “It’s still a work in progress,” he adds. “I think people are developing cool things with it that at one point you’ll be like, ‘I can’t live without it.’ Once that happens — maybe once you can pay your taxes with it, stuff like that — it’ll change commerce.