New IDA director is no stranger

When Kristy Johnson moved to Halifax County from Georgia in 2008, the community welcomed her family with open arms, she says.

Now she has the opportunity to return the favor as the new executive director of the county’s Industrial Development Authority.

Johnson’s no stranger to the organization. She’s worked for the IDA since 2009 in various roles, starting as operations manager, then in marketing and business development before moving up the ladder to deputy director. Prior to that, she was mayor of the town of Halifax and served on several local chamber of commerce committees.

Johnson became the IDA’s executive director in mid-September, replacing Brian Brown, who was terminated by the IDA board in October 2020 after a little more than a year on the job. A few months after the firing, IDA board member Rick Harrell said, “We made that change because we saw an operational weakness. It wasn’t any … malfeasance of any kind.”

That’s not a problem he sees in Johnson. “She is strong in the operational area,” says Harrell. “One of the things I know she’s going to concentrate on is existing business.”

Johnson sees the major focus of the IDA as supporting the area’s existing businesses, promoting retention and expansion. Her role in that? “Getting to visit our existing industries and hear their challenges and opportunities and support them in their endeavors, and improving our community that way,” she says.

Johnson would like to be more targeted about recruiting outside industries that would complement existing industry, for example, needed suppliers or services. She plans to do that by meeting with existing industry plant managers, HR managers and others on a regular basis. The biggest challenge she’s heard so far from businesses coming out of the pandemic is re-establishing a feeling of safety for employees who may have left the workforce.

In her new role, she has done a lot of listening. And at the end of the day, she says, the IDA needs to re-establish itself as a partner “not just in words, but in action.

“My goal is for us to continue to do good work and those relationships will begin to repair themselves and our efforts will become evident that we mean what we say when we say we want to be a community partner and support and try to recover from this turbulent period.” 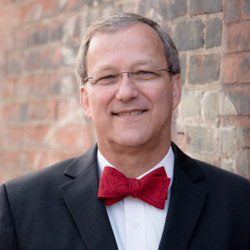