This month, the Winchester Regional Airport will open the first group of hangars for midsize private aircraft, a public-private project that could end with 32 new units, bringing the airport’s total number of hangars to 100.

The multiphase, potentially $20 million project is a partnership between the Winchester Regional Airport Authority and Purcellville-based TMG Construction Corp., a design-build firm. The first phase of the project involves the sale and construction of 11 hangars, six of which will open in November. Developers broke ground in December 2021.

“It’s all very exciting,” says Nick Sabo, executive director of the airport authority and the airport’s manager. “It’s cutting edge because there are not many models of this type to look at as far as a public airport like ours. The airport authority had to adopt a policy on how to handle the partnership, so we wrote the script.”

The authority feels comfortable working with private industry, Sabo adds. “This was the only way we saw to bring new hangars to the region that was cost-effective and would offer a quick timeline.”

The development investment of up to $20 million will be spread over a six-year period. “We have land available, but what we lack is deep reserves to invest,” Sabo notes. “This means new tax revenues for the airport and Frederick County and new revenues for TMG.”

Hangar space in the region is at a premium, Sabo says.

The additional hangars also will help increase the airport’s and the Frederick County Economic Development Authority’s outreach “to companies with large government portfolios and direct government [and] private users with activity connected to Winchester Regional Airport,” says Patrick Barker, the EDA’s executive director. “This clearly shows that Frederick County has the assets to be attractive to aviation businesses.”

State funding — a $4.1 million grant from the Virginia Department of Aviation — is helping the airport replace its 33-year-old, 9,245-square-foot terminal with a 16,000-square-foot building that will include a community room and leasable office space. The airport is also approved for a $3 million loan from the U.S. Department of Agriculture for the building project.

Sabo hopes to start construction of the terminal in March 2023, with completion in summer 2024, noting that all of the changes “add up to a historic time of development at this airport.” 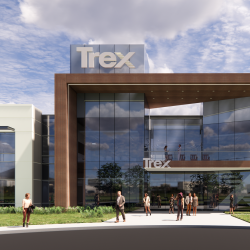