The business community looks to Washington and Richmond for answers 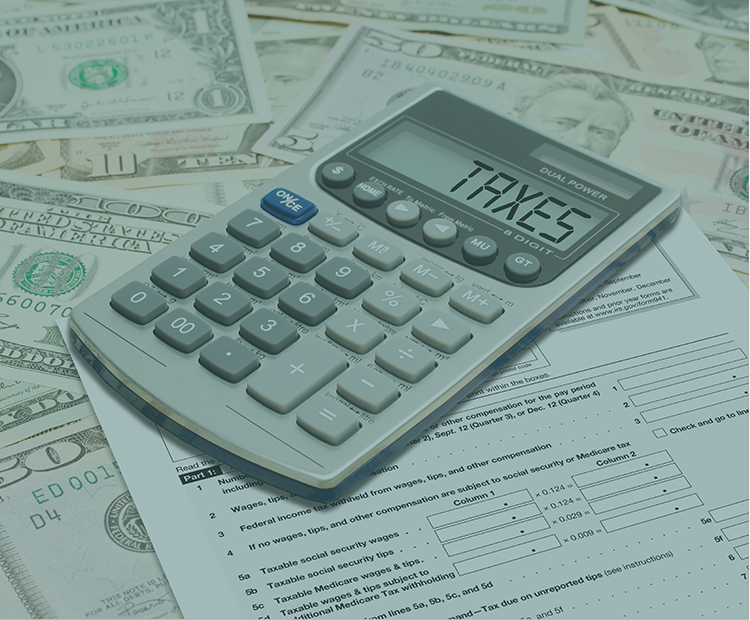 Taxes may not be the sexiest issue, but they have been a hot topic lately in Washington and Virginia.

“I can’t really think of the last time I’ve been in a client meeting over the past six months where they haven’t asked me what I think that Congress is going to do with tax reform,” says Stephen Kimberlin, a CPA who is senior tax manager at Dixon Hughes Goodman in Richmond. “It goes hand-in-hand. It’s not a Virginia specific issue, but it does affect state taxes greatly.”

A recent survey of Virginia certified public accountants shows that they see tax reform as a major issue that needs to be tackled at the national and state level.

More than 250 accountants throughout the Old Dominion participated in the survey, which offers their viewpoints on the state’s business climate and the top economic issues they expect to impact Virginians in 2018.

Sizing up the economy
When asked about their outlook on next year’s economy, a majority of CPAs had positive views about the national economy, but they had conflicting views about Virginia’s economy. More than 58 percent were optimistic about the Old Dominion’s overall economic climate. Nonetheless, a majority of respondents picked the “economy” as the biggest issue in the upcoming 2018 election, in which all of Virginia’s 11 congressional seats and the U.S. Senate seat held by Tim Kaine will be up for grabs. 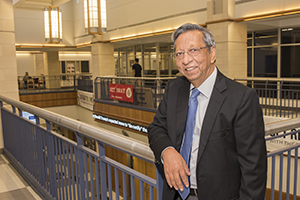 Vinod Agarwal, an economics professor at Norfolk-based Old Dominion University and director of the Economic Forecasting Project at its Strome College of Business, has reservations about Virginia’s economy.

Indecision in Washington is affecting Virginia’s economic growth, he says, particularly in areas such as Hampton Roads that still are dependent on federal spending. The commonwealth created about 45,000 jobs from December 2016 to August 2017, Agarwal says, but most of those new positions are concentrated in Northern and Central Virginia.  The other areas in the commonwealth, he says, saw little job growth if not a decline.

“We’re still seeing the effects of sequestration and the budget uncertainties in Washington, D.C.,” Agarwal says.  “When Congress continues to pass [continuing budget] resolutions, that does not really help businesses that depend on this money to plan their activities because they simply do not know what in the world is coming.”

He says Virginia’s economy is lagging the national economy. The gross domestic product of Virginia and the U.S. will see similar growth this year, but not next year, he predicts.

The U.S. also is expected to have a slightly higher job growth rate than Virginia, Agarwal says. U.S. jobs are forecast to grow by 1.5 percent this year and 1.4 percent next year. Virginia should see jobs grow 1.3 percent each year in 2017 and 2018. 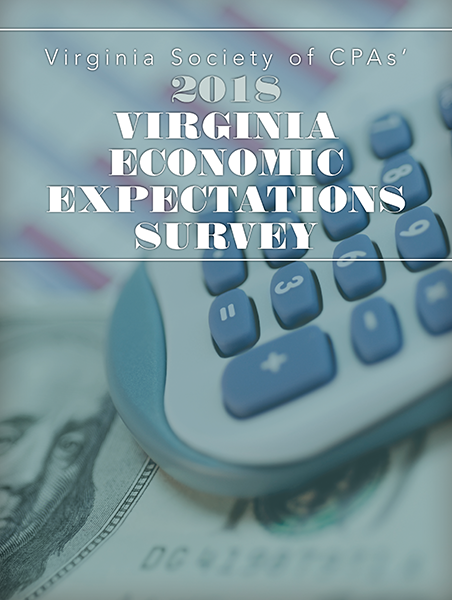 The CPA survey says the commonwealth’s tax climate is one of the top two issues that need to be addressed in the 2018 Virginia General Assembly session. (The other big issue is health-care costs.)

“I think 6 [percent] is a fair rate,” says Gary Dittmer, CPA, a senior tax director at Spok Inc., a Springfield-based health-care communications firm. “Virginia has done well with that. We’ve attracted a lot of business here.”

CPAs, however, say they aren’t as pleased with the federal corporate income tax. More than 60 percent say a rate drop would stimulate the economy. President Donald Trump’s recently unveiled tax plan seeks to lower the corporate rate from 35 to 20 percent. A plurality of CPAs surveyed were optimistic that tax reform will pass under Trump’s administration.

Tax reform has been widely discussed in Virginia politics, too. Both of Virginia’s major gubernatorial candidates have called for changes at the state and local level. Ed Gillespie, the Republican nominee, has proposed phasing out the machinery and tools tax; the merchants’ capital tax; and the Business, Professional and Occupational License (BPOL) tax, which is based on a company’s revenue instead of its profit.

Gillespie also wants to cut individual income tax rates by 10 percent across-the-board. He says this move will impact businesses because most Virginia company owners pay taxes as individuals, not corporations. 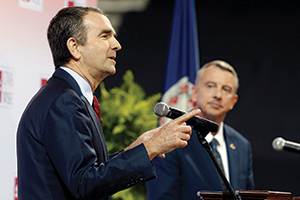 “Virginia’s antiquated tax code was designed in a bygone era, and our income tax rates have never been lowered since they were established in 1972,” his tax plan says.

His Democratic rival, Lt. Gov. Ralph Northam, has advocated exempting startups in rural or economically distressed areas from BPOL and merchants’ capital taxes for the first two years of their operation.

Virginia’s tax structure has been cited as one of the reasons for the commonwealth’s recent slide in national business rankings. Those lower rankings are the focus of a study underway by the Virginia Economic Development Partnership (VEDP), Virginia Chamber of Commerce and Virginia Tech’s Pamplin College of Business.

“It’s not so much that this one thing is a deal breaker or a major obstacle by itself, but ultimately the choices we make across a wide range of public policies will impact the overall standing of the state,” says Stephen Moret, the CEO of the VEDP, which markets the commonwealth to businesses thinking of expanding or locating in the state.

On Dec. 1, the chamber will present its updated business plan, Blueprint Virginia 2025, to the newly elected governor. The document will outline priorities for improving Virginia’s business climate, including tax reform.  It is based on a recent statewide survey of 6,000 people in the business community.

The Blueprint survey also identified tax reform as a priority for business. A majority of people participating in the chamber’s Blueprint said Virginia should start moving forward now with a comprehensive tax reform plan to make Virginia more economically competitive. Thirty-nine percent of respondents to the chamber’s survey identified reforming corporate income taxes as the move that would have the greatest impact on improving Virginia’s business climate. Thirty-two percent of respondents pointed to personal income taxes, while 29 percent targeted local taxes such as BPOL and machinery and tools.

One issue that has come to the forefront through the rankings study is Virginia’s tax burden for new, job-creating business investment projects. Virginia ranks poorly in this area, according to the Tax Foundation’s Location Matters study. Its results are factored into national rankings, including CNBC’s and Forbes’ lists of best states for business.

“Virginia has very few statutory, by-right incentives to encourage new job creation or investment; hence, our state/local tax burdens for new investment are worse than for existing firms that aren’t expanding,” Moret explains in an email.

Of course, tax issues vary by industry. According to the Location Matters study, property taxes pose the biggest tax burden for Virginia manufacturers. With a corporate headquarters, the burden is more evenly split among different taxes, including property, sales and income taxes.

The Virginia Manufacturers Association says local taxes are an issue for its members. The organization has been advocating the removal of the machinery and tools tax, which is imposed on manufacturers in every locality in the commonwealth except Virginia Beach.

“We have a member who’s been paying the same tax on the same piece of equipment since World War II,” says Brett Vassey, VMA’s president and CEO.

The price of health care
According to the CPA survey, the biggest obstacle to business growth continues to be the rising cost of health care. Survey respondents have cited health care as Virginia’s most pressing issue for many years. Health-care costs also were identified as the largest area of concern for businesses in the Virginia Chamber’s Blueprint survey.

Rising health-care costs are becoming more of a challenge for PBMares but not a crisis. The company, an accounting and consulting firm with eight offices in Virginia and one in Baltimore, says it has seen a gradual uptick in its health-care costs over the past five years.

“We do our best not to pass costs on to employees when we don’t have to,” says Mary Aldrich, PBMares’ chief operating officer and partner.

The implementation of the Affordable Care Act (ACA) has been a major part of the health-care debate, but CPAs seem split on whether efforts by Congress to replace the ACA represent an improvement.

Inadequate infrastructure
Another detriment to business, according to the survey, is the commonwealth’s infrastructure. Twenty-five percent of respondents picked infrastructure as the most pressing issue for Virginia, behind health-care costs.

The problem is acutely felt in traffic-jammed areas like Northern Virginia and Hampton Roads. Andrew Martin, CPA, a vice president and principal at Corbin & Co. in Chesapeake, says a big problem in Hampton Roads is the number of water crossings involved in driving from one location to another in the region.

“We need to be able to effectively maintain the roadways and bridges/tunnels that we have as well as efficiently respond to needs for new ones,” he says. “This will require a cohesive regional approach to the problem.”

Finding the right talent
Roads and bridges aren’t the only things that need to be maintained. The commonwealth also must have a competitive workforce. CPAs taking this year’s survey say that the availability of an educated workforce and a pro-business climate are the top two factors that have the greatest impact in retaining or attracting businesses.

When asked about the commonwealth’s supply of talent, a majority of respondents say there’s an adequate labor pool to replenish Virginia’s workforce.

Recruiting employees hasn’t been an issue at PBMares, but the firm still makes workforce development a high priority.

“Talent is always in high demand to be a leading firm,” says Aldrich. “What they’re going to be teaching in college will be shifting, and as we gear our company towards the new technologies and align training our own staff and hiring new staff with those technologies, there will be a big race for the right talent — retaining it and attracting it.”

Other industries, like manufacturing, are facing a talent shortage.

“We’re very dependent on a much more diverse group of talent in order to compete globally,” says VMA’s Vassey. “We need everybody from research, Ph.D.s to folks that … work in production.”

Partisanship
No matter the issue, whether it is taxes, health care or workforce, finding a solution depends on what happens in Washington and Richmond.

But almost 82 percent of survey respondents say partisanship at the federal and state level is preventing government from addressing urgent business needs.

Take federal tax reform, for example. Martin, the CPA from Chesapeake, hopes that Congress finally takes some kind of action.

“Whatever the rules are, businesses are going to figure out a way to work around, or work with, the rules, for the best benefit,” he says.

VSCPA MEMBERS WEIGH IN ON THE STATE OF THEIR REGION …