The Northern Neck is getting its first multiscreen movie theater as part of a larger entertainment center, as a Lancaster County couple breaks ground on the project Thursday. 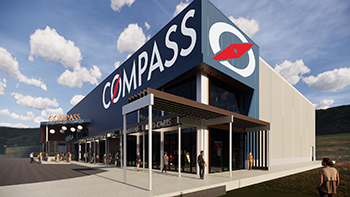 Expected to open in late April 2020, Compass Entertainment Complex will include a 28,000-square-foot facility with six movie screens, an arcade, indoor adventure course and a full-service restaurant and bar, said Julien Patterson, who purchased a home in the region in 2005 with wife and business partner Terri Wesselman. Outside the facility will be a mini-golf course, batting cages and a go-kart track, plus other activities that Patterson said would be surprises.

A groundbreaking ceremony is scheduled Thursday morning at the site, on the corner of Irvington Road and Wilson Lane between Kilmarnock and Irvington.

In 2012, Patterson and Wesselman sold Chantilly-based Omniplex World Services, a security and investigative firm, which at the time of the sale employed more than 3,500 people and had annual revenue of more than $100 million.

The couple then became involved in local development in 2017, starting an art gallery, clothing boutique and coffeehouse. Patterson said they researched the market and quickly concluded that a movie theater, along with other family-friendly entertainment options at the same location, was what the Northern Neck was missing. The closest movie multiplexes are more than 30 miles away in Gloucester and Yorktown.

“The Northern Neck is a wonderful place to live, work and play in many ways,” Patterson said Friday. “In all of the many things it had to offer, it didn’t have this.”

The complex will be built on seven acres of a 22-acre vacant lot. They do not have any plans for the other 15 acres, Patterson said, other than maintaining the wooded property, which is near the Hills Quarter community.

Patterson declined to give a specific cost of the project, saying that he hasn’t determined how many batting cages and go-kart tracks they’ll build. He does anticipate that the complex will employ 35 to 40 people year-round and up to 70 people during the summer high season, and they expect to begin hiring interviews in January.

The theater will show first-run movies, and screens will be available for corporate rental and special events. Patterson said he hopes to attract some businesses’ teambuilding activities, especially during the off-season.

“We’re trying to be thoughtful in our approach and our execution,” Patterson said. “When we look at what makes this area so unique, it’s because it’s such a wonderful community for families and young couples.”