The new filmmaking hotspot in Virginia is Southwest Virginia. David Baldacci’s novel-turned-feature-film “Wish You Well” wrapped 14 months ago in Giles County.  Last fall another popular Virginia author, Adriana Trigiani, returned to her hometown of Big Stone Gap to direct the feature film made from her best-selling novel by the same name.

“There hasn’t been this much excitement in Big Stone Gap since ‘Coal Miner’s Daughter’ was made here in 1979,” says Patrick Murphy, town manager of the community of 5,000 residents.

Thirty-four years after Sissy Spacek turned in an Academy Award-winning performance in the film about the life of country-music star Loretta Lynn, Hollywood descended on Big Stone Gap again. This time there were dressing-room trailers for stars Patrick Wilson, Ashley Judd and Whoopi Goldberg.

“How often,” asked Andy Edmunds, director of the Virginia Film Office, “do you have a movie named for a town in your state — and then have it filmed in that town, the same town where the scriptwriter-director grew up and penned the novel it’s all based on?  This is a state film office dream — as well as a state tourism dream because the tours that will come later will bring millions of extra dollars to this region.”

Rita McClenny, president and CEO of the Virginia Tourism Corp. (VTC), points out that “research shows outdoor recreation, scenic drives and the overall relaxing atmosphere of Southwest Virginia are major visitor appeals for the region. ‘Big Stone Gap’ showcases the grand mix of attributes, including the area’s historical attractions.”

Wise County, in the mountains of far Southwest Virginia, could use a little boost.  It’s hoping to grow its tourism industry to replace money being lost with the decline in coal mining.  In 2012 the economic impact of tourism in Wise County was $32.46 million, according to the VTC. Tourism-attributed payroll for the county was $6.57 million; employment, 370 jobs; state tax receipts, $1.43 million; and local tax revenues, $450,000.

Typically, sites where movies are filmed draw larger numbers of tourists and dollars; but it’s difficult to point to a direct cause-and-effect relationship.  For instance, while Richmond and Petersburg officials cite anecdotal evidence of the impact of a recent movie, “Lincoln,” on such things as an uptick in behind-the-scenes tours related to the filming, no specific research has been done on visitation directly attributable to “Lincoln,” filmed in Richmond and Petersburg in 2011 and released in 2012.

Still, there’s no denying that “a film made in an area means greater appeal to potential visitors for traveling there,” says McClenny. “The resulting tourism enhances the vitality of the community.  Filmmaking and tourism work hand-in-hand to improve the quality of life for residents as well as the quality of visitors’ experiences.”

What’s new this time out with “Big Stone Gap” is social media, which didn’t exist at the time of “Coal Miner’s Daughter.”  It will play a major role in the promotion of the movie, as well as in the town and county’s tourism. “I understand Adri has something like 14 million fans on Facebook, and we want to reach out to all of them.  We’d only have a problem if all of them decide to come at the same time,” jokes Murphy.

Trigiani’s Facebook page shows more than 34,000 “likes,” with 4,000-plus followers writing about all things Trigiani, including the movie. That should help create a buzz about “Big Stone Gap.” Trigiani used her Twitter and Facebook accounts to announce casting choices. Once filming concluded and she was editing in late November, she wrote on Facebook that she was “Missing Big Stone Gap with my feet up in Greenwich Village (NYC).”

After years of her assurances that “Big Stone Gap” would be filmed in Wise County, it was her tenacity more than anything else that got the film made in 2013, according to Edmunds. “It would have been very easy for Adriana to have gone along with interested producers as long ago as 1998, when she first started working on a film version of her novel — but they would have spent three days filming on-site and doing the rest on a back-lot somewhere. Adriana wouldn’t have any of that.  She was completely dedicated to having it all shot here, and it was that dedication that finally brought all of the components together.” 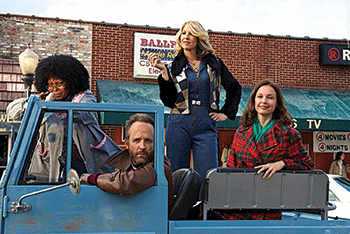 Trigiani, who moved to New York years ago and has written more than a dozen best-selling books, spreads the credit around for last fall’s production. “It became clear to me that 2013 was the year I had to film ‘Big Stone Gap.’  My dream cast of Patrick Wilson (Jack McChesney), Ashley Judd (Ave Maria Mulligan) and Whoopi Goldberg (Fleeta Mullins) were all available.  In addition, the Commonwealth of Virginia and the Virginia Tobacco Commission were able to assist us with funding,” she says.

They could end up contributing as much as $900,000, including incentives for which the production company is eligible once its spending is audited.

Big Stone Gap and Wise County had no problems coping with the occupation of their town by cast, crew, media and onlookers during the four intense weeks of filming that began last Oct. 19.

“It’s all about coordination,” Murphy said, “but Adri got us in the loop early — back in July — so it’s all been seamless. We got out in front on providing goods and services, such as security and traffic control … Our local folks chipped in wherever they could, as with the vintage cars we needed — 1978 or earlier — so car clubs and individuals came forward with them.”

His own 1973 Toyota Land Cruiser is one of the vehicles in the film. It was spotted by a set designer walking to Murphy’s backyard shed for memorabilia the family had pulled from the fire when his mother’s restaurant, Carmine’s (featured in the film), burned years ago.

People close to the movie described the film as a “small-budget film,” which puts it in the $3 million to $4 million range.  Although no one would provide Altar Identity Studios’ production budget, Edmunds confirmed that none of the movie’s investors were from Virginia — though the Virginia Film Office and Virginia Tourism Corp. have provided many resources.

As far as jobs, Edmunds says they included “150 local employment opportunities, including the one-to-two days of work for extras in the film.” He expects movie production alone to have a $4 million to $5 million economic impact on the area. This amount includes rooms at the nearby Comfort Inn as well as in Norton, meals, rental vehicles, film-related services and shopping for merchandise and hardware in local stores.

“Somebody saw Patrick Wilson shopping with his son in the Wal-Mart on the outskirts of town one night,” Murphy said, adding that Wilson’s father’s family is from the area.  “The cast and crew made a definite effort to spend their money locally. The movie will help encourage new businesses to open, such as restaurants — which we need more of.”

Crew members ordered out from Gary Hall, owner of Dari Delite, a restaurant that serves “a little bit of everything from suds to fish.”  He reported the most popular food orders were his grilled and crispy chicken wraps and his beef sliders with onions — sent to the sets and trailers with mixed green salads.  “Miss Judd requested vegetable soup and really liked our cornbread.”

Anticipation of the film helped spur the beginning of downtown revitalization more than two years ago.  This was long before the movie became eligible for Virginia film-incentive money, an enticement used by competing states as well as nations such as Canada to attract filmmakers.

The town purchased Carmine’s — the film’s 1970s diner transformed from an old gasoline station — two years ago.  The structure will be transformed again, into a visitors’ center, thanks to $200,000 in grants from the Virginia Tobacco Indemnification and Community Revitalization Commission and an additional $50,000 from the town. Some of the movie’s sets might remain as a tourism enhancement, says Murphy.

An $800,000 Virginia Department of Housing and Community Development grant paid for other tourism infrastructure improvements, including landscaping improvements along sidewalks, parking lots and in Miner’s Park — as well as improved signage for area attractions. “Our Greenbelt walking trail connecting the town’s natural and historical attractions is almost complete, too. The excitement surrounding the film is a big bonus for the area,” says Murphy.

If the town is filled with gratitude for the woman who grew up here, that woman is equally pleased with the town’s performance during her years of perseverance. “I am grateful to my hometown friends and colleagues, who donated their time and energy to this project, which is so close to my heart.  This was a labor of love for everyone involved,” says Trigiani.

Edmunds says movie viewers will love the film:  “It’s a great slice of life that will be inspiring to audiences — and to tourists.”