New Ravenna Mosaics, housed in four repurposed buildings on Virginia’s Eastern Shore, lies thousands of miles west of its namesake — Ravenna in northeastern Italy. Yet artistically the company and the city are closely linked.

The United Nations Educational, Science and Cultural Organization’s (UNESCO)  World Heritage site of Byzantine mosaics, Ravenna was the inspiration for New Ravenna’s corporate name. The company’s founder, Sara Baldwin, came up with it during her last year in graduate school at the University of Pennsylvania.

As a master’s student in fine arts, Baldwin wanted to launch a mosaics business, making commercial use of a fine art — a concept frowned upon by arts purists at the time.  She had not visited Ravenna but was well versed in the classical mosaics produced there more than 1,250 years ago.  A graduate-school friend, Kevin O’Brien, suggested New Ravenna, and the company was born in Exmore in 1991.

In an odd twist on the coals-to-Newcastle theme, Baldwin’s multimillion-dollar mosaics company — which imports most of its rough-cut marble from Italy — is finding a new market for its highly refined, Northampton County-made products in Italy.

“It’s a historical U-turn, like selling ice to Eskimos,” says Wes LaBlanc, New Ravenna’s president and principal. “It’s an honor because we’ve updated the aesthetic of an ancient art form, and Europe offers very little of what New Ravenna offers.  In a way, the art form had ossified, and New Ravenna has brought a freshness to it.”

“We’ve been in Canada a very long time, with several distributors in Calgary, Toronto, Montreal — and a foothold in Vancouver,” says LaBlanc, who oversees sales.  “We’re getting inquiries weekly from dealers around the world — Australia and Tunisia, for example. Sara has been to the United Arab Emirates several times, as people there are interested in preserving their ancient culture as part of their modern culture.  We expect the international market to grow exponentially in the future.”

In the U.S., the New York area is the company’s largest market, says Baldwin, noting that the entire high-end industry is a small, niche market.  “Generally speaking, our domestic customers want the simpler designs, such as flooring with organic texture or pattern. International buyers want more intricate, high-end products, such as entire bathrooms in mosaics,” she says. 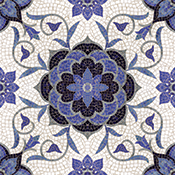 An entire bathroom can start at as little as $10,000 and go up to hundreds of thousands of dollars, depending on the complexity of the design, size of the space, rarity of the materials and other specifications. The average range for an international sale at New Ravenna is $100,000-$150,000, compared with $25,000-$75,000 for a sale within the U.S.  “When you think about the high cost of shipping,” Baldwin says, “internationals don’t want to pay exorbitant rates to ship a $20-a-square-foot product, but they’re willing to pay to ship a more complex design.”

This year is on track to be New Ravenna’s best year ever, with sales at least 15 percent above those for 2012, according to LaBlanc.  The company has 125 employees — at least a half-dozen more than it had before the recent recession.   Baldwin sees the “explosion in business due to customers’ desire worldwide to customize.”  In August she visited Russian showrooms and returned with her first order.  New Ravenna has also done projects for many celebrities — reality TV star Kim Kardashian, recording artist Taylor Swift and filmmaker Stephen Spielberg among them.

Somewhere in almost every pattern is the hint of a wave or a sandy beach, which reflects the Eastern Shore environment in which Baldwin has spent her life, growing up on the McCaleb farm near Craddockville.

Living with her two children in a contemporary home on a bluff overlooking the Shore’s bayside, she has trained design teams (one includes her sister, Ellen McCaleb) in creating patterns to be grouted together and applied to walls and backsplashes. 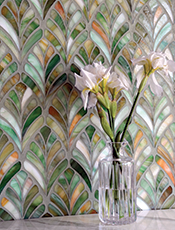 Sara Baldwin Design has become a well-known brand, but Baldwin partners with many designers shown on her website.  Thomas Hickey, an architect and partner in the New York firm GRADE Architecture + Interior Design, has high praise for Baldwin’s work. “Sara’s work reflects her personality — dynamic, creative, intelligent.  She collaborates with architects, designers and artists to learn more and expand her design collection and brand.  In almost every home we design, we collaborate with her.  In the Virginia [Beach] house we’re working on now, we’re working with her because she makes every job a custom one.  There’s nothing standardized about it.”

Baldwin is glad she’s not presently starting her business. “The mosaics business is a difficult business to start from scratch today because it’s a labor-intensive industry and requires considerable capital outlay for the new water-jet technology used in cutting some tile pieces.”

The long-term goal for Baldwin and her design team is “to brand the Eastern Shore as a center for product design and manufacture.”  She sees the Shore — with its relatively low cost of real estate and labor — as an incubator for businesses.  “We have a great work ethic here, partly because of the Shore’s relative isolation from mainland Virginia.  The mentality is ‘We can do it’ — and that’s empowering.  We’re a net importer of cash — we make a product, ship to customers who don’t live here, and the money stays here.  Most of our salaries stay here in our families’ spending with merchants.  The Shore has provided a great formula for business as well as for living.”

The company’s principals and directors have chaired and served as board members of the Boys and Girls Club of the Eastern Shore and lead its primary annual fundraiser.  They’ve also served on local chambers of commerce boards, donated to dozens of charities’ silent auctions each year and been near or at 100 percent employee participation in United Way’s automatic payroll deduction campaign.

An Exmore native living in Delaware, Tom Savage — museum affairs director at Winterthur Museum, Garden & Library and a friend of Baldwin — sums up her accomplishments this way: “This business has been transformative for the community.”

Italy’s economy
Despite the fact that the Italian economy shrank more than expected during 2013’s second quarter, the nation’s appreciation for handcrafted products and its legacy of a refined sense of design make it a good market for companies with these attributes.  Baldwin says, “As with all economies, there remains a select segment in Italy that has retained its ability to purchase and invest in luxury products.”

Visiting Italy
Baldwin flies to Bologna — known for its delicious cuisine and medieval architecture — for Europe’s largest tile show every September.  After that event, she travels to Verona — the spiritual home of Romeo and Juliet — for the marble fair, Marmomacc.  Hearkening back to her company’s namesake, she also travels to Ravenna.

Northampton’s Economy
With a heritage in industry and agriculture, Northampton County also has a southern tip with a globally significant wildlife habitat. Tourism —including easy access to Chesapeake Bay and Atlantic Ocean fishing — is important to the economy. Bay Creek in Cape Charles offers the Arnold Palmer and Jack Nicklaus golf courses.

Visiting Northampton
When New Ravenna brings in dealers from Canada and overseas, the historic, waterfront town of Cape Charles is the nexus of entertainment. Many guests stay at the Cape Charles Hotel; boat trips to barrier islands and kayaking trips to Chatham Vineyards are among the activities enjoyed.